Then, inspired by the breakthrough of WordPerfect in the 1980s, startups like Omniture, Qualtrics, Domo Inc., and Podium Corp. Inc. flourished. With their growth came the need to raise money, protect intellectual property, go public, or sell themselves.

So whereas they once flew over, venture capitalists are now flying in, with an influx of complex legal work following.

Dentons, the world’s largest law firm by attorney headcount, announced a planned combination with Durham Jones in August. AmLaw 100 firms Quinn Emanuel and Lewis Brisbois have set up brick-and-mortar offices in what’s now called the Silicon Slopes. Regional firms are adding to their IP and regulatory practices and setting up alternative legal services to compete with Silicon Valley law firms on price and proximity.

In the second quarter of 2020 alone, Utah had 14 venture capital investments and deals totaling $240 million, according to the PricewaterhouseCoopers and CB Insights MoneyTree Report. Utah’s activity was the 13th highest nationwide despite the state’s small population, and the amount invested there has more than doubled since 2013. 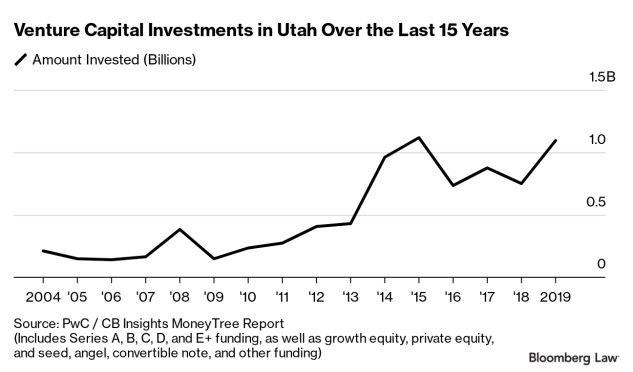 More funding means more opportunities for lawyers to represent clients at all stages of a company’s life cycle, from Series A and Series B funding to an initial public offering and beyond.

“Companies there have matured, and they’re not just a bunch of startups raising venture capital anymore,” said Patrick Schultheis, chair of Wilson Sonsini’s corporate department and managing partner of its Seattle office. “These companies are sophisticated buyers of legal services.”

As venture capital pours into the state, companies grow and legal work follows, creating a “virtuous cycle” of growth, said Kimball Parker, chief executive of SixFifty, a legal startup owned by Wilson Sonsini. While coastal firms such as Wilson Sonsini still tend to bring these startups public, they may began to see increased competition.

“A lot of firms can smell the opportunity,” Parker said.

Jones, who co-founded Durham Jones a little under three decades years ago, said his practice has grown from four lawyers to nearly 100.

Quinn Emanuel, the white shoe firm headquartered in Los Angeles, added a Salt Lake City location two years ago. Though the firm has been doing business in the Silicon Slopes for years, Quinn Emanuel wanted to tap into the “booming” market and provide technical legal services, especially patent litigation, on the ground, said Stephen Wood, a partner in the office.

The Salt Lake City location consists of him and a few associates, all of whom have technical backgrounds ranging from electrical engineering to life sciences, Wood said.

“A lot of growth in Silicon Slopes is companies based in California opening up offices and centers here in Utah,” he said. “As the market in Utah expands, you’re seeing more and more high-profile tech cases.”

“Our group in Salt Lake grew very fast because our Big Tech clients were recognizing that we provide the same level of value but at a better price point,” he said. 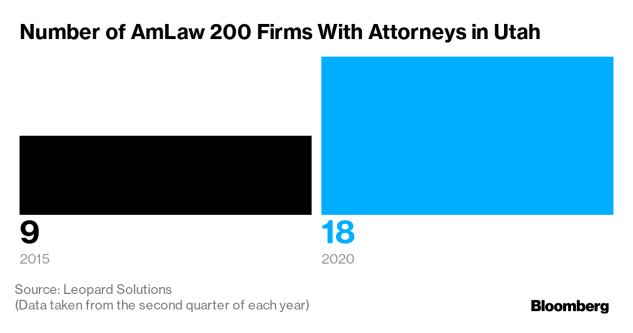 Minneapolis-based Dorsey & Whitney had about 35 lawyers in Salt Lake City in 2017, said Nolan Taylor, a capital markets and M&A partner in Utah. That number has nearly doubled in the last three years, with large additions to the intellectual property and energy groups, he said.

“As companies here grow, they can outgrow their counsel if it can’t keep up with the needed services,” Taylor said. “We want to have that ability to hold onto clients throughout their entire life cycle and show them there’s no reason to leave this market for more sophisticated work.”

Two legal startups in the region, Parsons Behle Lab and SixFifty, seek to automate privacy compliance, including with the E.U.'s General Data Protection Regulation and the California Consumer Privacy Act. Those are now some of the most in-demand areas for companies young and old, attorneys say.

Tomu Johnson, chief executive of the Parsons Behle Lab and an attorney for the firm, said products developed by the lab are flat fee, making it easier for growing companies to “cost contain.” About one-third of the lab’s customers are from the Silicon Slopes, he said.

Scott Karren, an intellectual property lawyer at Holland & Hart in Salt Lake City, said his office has seen a “very sharp increase” in demand for legal advice and help with patent applications.

“More and more, companies are starting to see the value of protecting their IP assets,” Karren said.

Coastal firms such as Wilson Sonsini thrive in Salt Lake City thanks to large teams and deep resource pools, said Mark Bonham, who as co-chair of Stoel Rives’ technology and life sciences practice deals heavily with emerging business and venture capital there.

But local and regional firms, he said, have something California firms often don’t: proximity.

In the Salt Lake City area, Bonham said it’s not uncommon for professionals to mingle at kids’ soccer games or restaurants.

“That’s still very important for clients: having a presence in the area can make it easier to meet their needs,” said Wood, the Quinn Emanuel partner. “We’re in a service industry, so being close and having those relationships matters.”

As larger coastal firms establish offices in the region, Utah-only and regional firms are increasingly offering services, such as sell-side mergers and acquisitions, that they might not have offered a decade ago, Bonham said.

Between September 2019 and September 2020, cloud software provider Domo dedicated about 45% of its outside legal spend to regional law firms, about 30% to large coastal firms, and about 25% to local firms, said Domo public relations director Cynthia Cowen.

But for the company’s initial public offering, in June 2018, Domo chose Wilson Sonsini. Dan Stevenson, Domo’s chief legal officer, is a Wilson Sonsini alumnus and also worked with the firm as in-house counsel for Fusion-io, which was acquired by in 2014.

“An IPO is a major corporate milestone,” Stevenson said. “Wilson Sonsini is the gold standard.”

Clint Betts, chief executive and president of Silicon Slopes, a nonprofit that represents Utah’s startup and tech community, said he’s confident the area will continue to grow thanks to its relatively cheap housing, strong universities, and culture of entrepreneurialism.

Utah’s GDP growth was the second-fastest in the country between 2018 and 2019, trailing only Texas and tied with Washington, according to data from the Bureau of Economic Analysis.

“There’s a misconception that you can’t build great companies in the state of Utah,” Betts said. “But companies here really punch above their weight class.”

Bonham said the pandemic has increased the need for legal services related to the Paycheck Protection Program and employment law. But venture funding hasn’t fallen off despite the pandemic: Stoel Rives advised a company in raising $10 million about a month ago, he said.

“I used to hear companies complain that people were afraid to move here because they thought it was this quaint, old-fashioned state, and if the company they moved to didn’t work out, then they had no other choices,” Bonham said. “I don’t hear that anymore ... that worry seems to have gone away. People are excited to move here.”