Jacksonville Beach, Florida, closed because of the Covid 19 pandemic.
Photo by Felix Mizioznikov

The passage rate for the July bar exam in Florida fell to 44%—down three percentage points from the most-comparable test results held two years earlier.

The passage rate for the 3,343 total online test takers compares with the 47% who passed in July 2019. A similar percentage, 47.4%, passed the October 2020 test, which was delayed because of the pandemic and concerns over technological problems.

Florida does not offer “reciprocity” to experienced lawyers already admitted to practice in other states, meaning those attorneys generally need to pass the bar exam if they want practice in the Sunshine State. The test is considered among the most difficult bar exams and pass rates are often among the lowest in the country.

Florida’s sinking pass rate released Monday mirrored the lower rates reported so far in some other, mostly smaller states. Iowa’s passage rate dropped to 71% in July from 80% in July 2019, for example, and Nebraska’s fell to 72% from 79%. 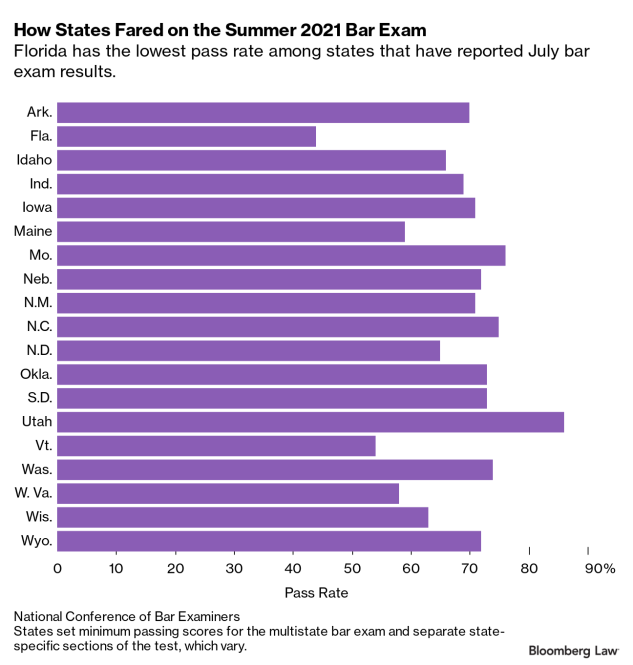 The National Conference of Bar Examiners has suggested the July 2019 results of tests that were taken in person are the most comparable to the July 2021 exam, given that states used an even wider variety of approaches to bar exams and law licensing in 2020.

Pass rate drops reported in Florida could be due to ongoing stresses test takers have had to endure because of the pandemic, said Sean Silverman of Silverman Bar Exam Tutoring.

Online bar preparation courses are sometimes less effective than the traditional kind, and technical glitches have plagued states like Florida that decided last year to use remote proctoring software to oversee their tests, he said.

Tech-related snafus “could have decreased the pass percentage,” Silverman said. “This was not an issue in July 2019.” 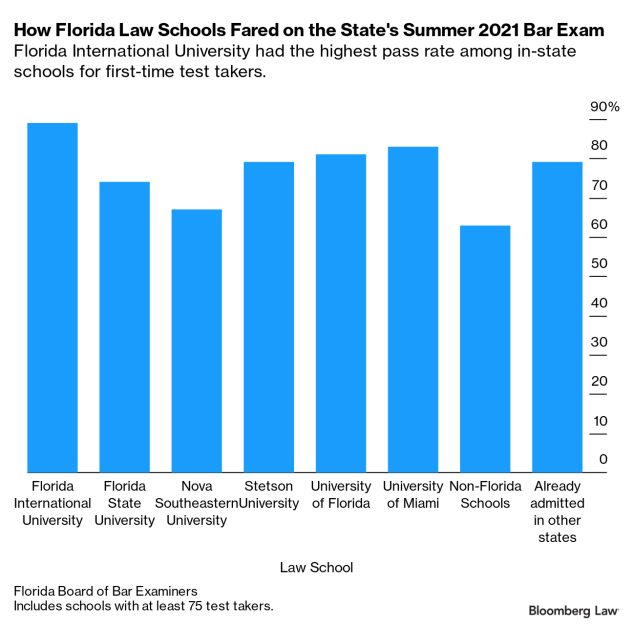 States like Florida that attempted to hold online exams in the summer of 2020 while using software from tech vendors ExamSoft and ILG Technologies ran into a range of tech glitches. Tests were delayed until October in most instances.

Florida canceled its online exam scheduled for Aug. 19 of last year less than 72 hours beforehand, after vendor ILG encountered numerous tech issues when attempting a run-through of the exam.

In a few states, passage rates remained static or rose when comparing results from 2019 and 2021.

(Updated with additional information on the Florida bar exam.)

To contact the editor responsible for this story: at copfer@bloomberglaw.com;
at jhughes@bloombergindustry.com