Dentons is severing ties with its Moscow and St. Petersburg offices over the war in Ukraine even though Russian colleagues “bear no responsibility for this crisis.”

The offices that house more than 250 people will operate as an independent law firm, Dentons said in a statement. “Our hope is that at a future time we will be able to come back together when it is lawfully and practically possible to do so,” said Elliott Portnoy, Dentons global chief executive officer.

DLA Piper, which like Dentons is a Swiss Verein, will transfer its operations in Moscow and St. Petersburg to its team there, the firm said in a statement.

Nearly 20 other Big Law firms have pulled out of Russia as the toll of President Vladimir Putin’s bombardment of Ukraine builds. The United Nations estimates there have been more than 1,600 civilian casualties, according to Bloomberg News.

Baker McKenzie, which along with Skadden Arps Slate Meagher & Flom is among Big Law firms still operating in the country, said in a statement it has been reviewing its activities and client work after the “appalling” invasion.

“Irrespective of sanctions, we will not act for any individuals or entities that are controlled by, or directly linked to, the Russian state,” or the current regime, Baker McKenzie said. 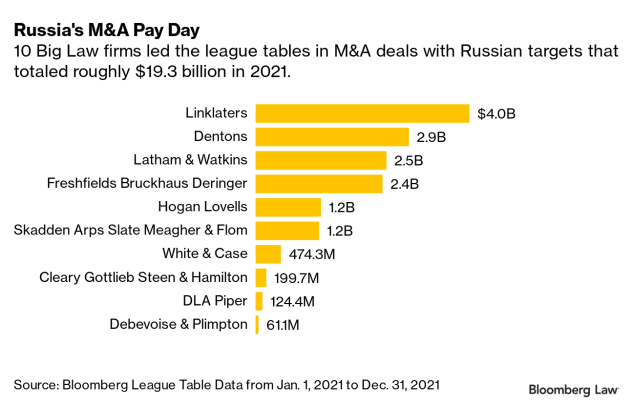 Firms’ decisions to exit Russia come with a financial cost. Dentons advised on five deals with Russian targets in 2021, worth nearly $2.89 billion, which was second only to Linklaters among Big Law firms, Bloomberg data shows.

“This is a difficult decision which we have taken in full consultation with our colleagues in Russia in order to continue meeting our legal and ethical obligations,” Dentons’ Portnoy said in the statement. “We have enjoyed more than 30 years of collaboration and friendship with our colleagues in Russia who bear no responsibility for this crisis nor for the circumstances that have led to this decision.”

PODCAST: War in Ukraine and Life-or-Death Choices for Big Law

DLA Piper said that after 17 years in the country, “we have concluded that maintaining a presence in Russia is not aligned with our values and therefore no longer viable.”