The Manhattan skyline seen from the Brooklyn borough of New York, in September 2020.
Photographer: Michael Nagle/Bloomberg via Getty Images

More Big Law firms are rolling out year-end bonuses, with extra payments as high as $115,000 for senior associates.

The firms joining the parade of bonus announcements Friday include Debevoise & Plimpton; Paul Weiss; Milbank; Paul Hastings; and Baker Botts. The moves come as slowing demand has tightened the job market for junior lawyers and prompted layoffs at other firms.

The scale starts at $15,000 for the most junior lawyers, according to Friday firm emails viewed by Bloomberg Law. The payment targets are the same those firms used a year ago.

The firms’ bonus plans follows an announcement earlier Friday by Davis Polk & Wardwell, one of the perennial leaders in associate compensation, that it would match last year’s bonus scale. They mirror moves by Baker McKenzie—the first firm to roll out associate bonuses in late November—and Cravath, Swaine & Moore.

“Once a firm like Davis Polk announces, that likely sets this structure in stone,” said Kate Reder Sheikh, a California legal recruiter for Major, Lindsey & Africa. “Matching last year tells us that firms, likely, did just fine this year—but aren’t sure what next year will bring.” 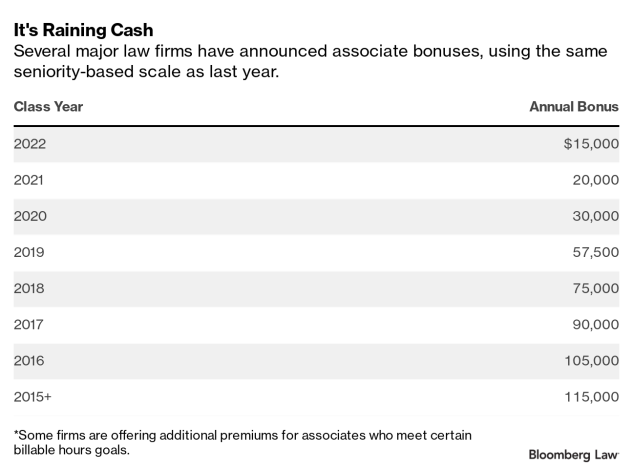 Debevoise bonuses will be paid by year end to associates “in good standing,” the firm’s presiding partner, Peter Furci, said in an email. Paul Weiss bonuses, which will be paid on Dec. 22, are in addition to discretionary awards handed out last week and in March, firm chair Brad Karp said in an email.

The recently installed leadership team at Paul Hastings said in an email that year-end bonuses will be paid to all eligible US associates on Feb. 3, 2023.

(Updated with comment from Reder Sheikh in fifth paragraph.)