The special bonuses do not appear to be contingent on billed hours or extraordinary performance and range from $4,000 for the class of 2020 up to $23,000 for senior associates, according to statements obtained by Bloomberg Law.

“Our associates have performed remarkably through these challenging times and we remain committed to compensating our exceptional talent at the top of the market,” said Paul Hastings chair Seth Zachary in an emailed statement. 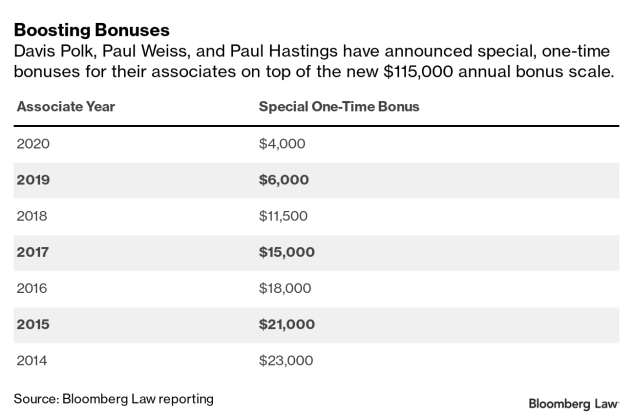 Davis Polk has established itself as a compensation leader, along with the likes of Cravath, long a close competitor. The firm in June raised its associate salaries to a range of $202,500 to $365,000, forcing others to match. It was the first Big Law firm last year to issue $40,000 “pandemic bonuses.”

Debevoise is slightly smaller at $1.22 billion in gross revenue across nearly 800 lawyers.

Paul Weiss announced in October that it would dole out special bonuses that would show the firm’s appreciation for its lawyers without specifying the amount.

“We set a high bar for success in 2020 and you have played a critical role in the firm exceeding it in 2021,” Davis Polk’s partners wrote in a memo to the firm obtained by Bloomberg Law. “Put simply, we could not be more grateful.”

Still, attorneys from these four firms are unlikely to be the highest compensated lawyers in the industry this year.

Firms like Cadwalader Wickersham & Taft and Boies Schiller Flexner are also matching Cravath’s bonus scale but have announced additional, performance-based bonuses for their busiest associates as high as $138,000 and $150,000, respectively. That brings their senior associates’ highest possible bonus value to $253,000 and $265,000.

The bonuses will pile on to the spring and fall bonuses that Big Law associates have already received, in addition to the base salary increase.

In Paul Hastings’ memo, the firm said eligible lawyers who did not receive fall and spring bonuses could retroactively earn those bonuses along with their annual bonus.

Other firms that have matched Cravath’s bonus scale include Cleary Gottlieb, Hogan Lovells, and Mayer Brown.

(Adds Paul Hastings statement in paragraph three and updates throughout with Debevoise.)