Dan Goldman, a heir who was lead Democratic counsel during President ’s first impeachment, won the US House primary in New York’s 10th Congressional District, a race that was reshaped by a court ruling earlier this year and marked by fierce competition.

Goldman, who staked his campaign on his record as a defender of democracy, won with 25.8% of the vote at 12:39 a.m., according to the Associated Press. State Assemblywoman Yuh-Line Niou was second with 23.7% of the vote, followed by incumbent US Representative .

Goldman had prematurely declared victory on Tuesday night even though the race hadn’t been called and competitors vowed not to concede until all votes had been counted. Shortly after 11 p.m., with a lead of only about 1,300 votes, he issued a press release calling himself the “Democratic nominee for Congress.” 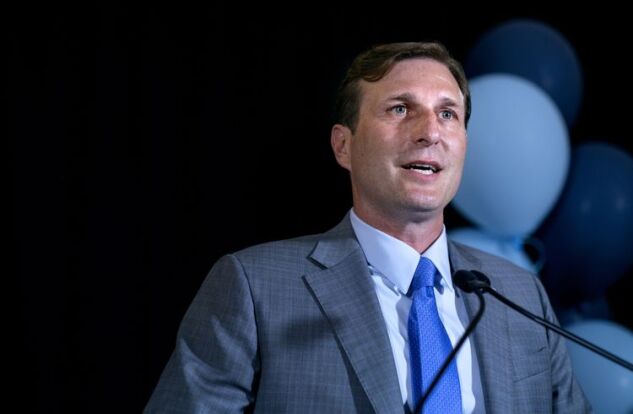 “It’s quite clear from the way the results have come in that we have won,” he said in a speech at his election-night party. When asked if he had spoken to other candidates, his spokesperson Simone Kanter said “no, they have to call and concede to him.

Niou, however, in separate remarks on Tuesday night, said she would “not concede until we count every vote.”

At the center of Goldman’s campaign was his opposition to Trump, a talking point he touted as he faced down a dozen challengers to represent a district that stretches across lower Manhattan and into brownstone Brooklyn.

“Being the only one in the field who has been in the trenches taking on Donald Trump and the Republican party, I think people recognize that I have a unique skill set and experience to lead the battle to preserve and protect our democracy,” Goldman said in an interview Monday.

In addition to his role in the Trump 2019 impeachment, Goldman, a 46-year-old lawyer and father of five, worked for a decade as an assistant US attorney in the Southern District of New York. He said heath care, increasing investment in the green economy, strengthening gun control legislation and expanding access to abortion would be among his priorities.

If he wins in November, he will represent one of the city’s most diverse and progressive districts. During the campaign, rivals assailed Goldman for using his personal wealth to fuel his campaign, accusing him of trying to buy the election.

He said that he decided to dip into his fortune so he could talk to voters, rather than donors. “I had a decision to make as a first time candidate in a very short race, which was that I could continue to spend my days talking to potential donors or I could put my own money in and get out in the field and talk to the voters,” he said in the Monday interview.

With a net worth between $64 million and $253 million, Goldman will become one of the richest members of Congress if elected in November.

The issue of abortion also led to attacks by rivals on the campaign trail after he said in an interview that he would “not object” to a state law that bars the termination of pregnancy after the point of fetal viability but that his personal views were “secondary to the right of a woman to make the decision about pregnancy herself.” He later walked back his comments. In the interview with Bloomberg, he said he was “100% pro choice” and that his answer was “misinterpreted.”

Besides mailboxes stuffed with flyers and airwaves filled with ads, Goldman gained ground in mid-August after winning the coveted from the New York Times. But the race remained competitive among a crowded field that included many people who have served in public office and were well known to various parts of the newly drawn district.

Jones, who grew up in Rockland and is among the first openly gay Black members of Congress, was left without a political home after a chaotic court-ordered of New York’s congressional districts.

Faced with the prospect of a matchup against Representative , the chair of the Democratic Congressional Campaign Committee, Jones moved to New York City. When he announced plans to run in the 10th Congressional District, he called it the “birthplace of the LGBTQ+ rights movement” and said it was a place that had long welcomed queer people of color.

With his loss, there will be one fewer Black member of Congress in an increasingly diverse House, where about 13% of members are Black, according to Pew Research.

Jones joined forces with rival Niou to speak out against Goldman and what they described as his opposition to progressive priorities including Medicare for All, the Green New Deal and legislation to expand the Supreme Court. “Conservative Democrat Dan Goldman cannot be allowed to purchase this congressional seat. Certainly not in one of the most progressive congressional districts in the country,” he said at a press conference.

Yet, Goldman may have benefited from progressive votes getting split among Jones, Niou and Rivera.

The election was also likely affected by the low turnout in late August, when many New Yorkers try to escape the city’s muggy heat. Across New York City, only about 76,000 people cast ballots in early voting, 12% less than in the June governor primary and a 60% drop from the mayoral primary last year.

Goldman’s campaign hosted a party beneath a tent at the Torch & Crown Brewing Company in Lower Manhattan, but the candidate waited for the results from a “war room” a few blocks away. Supporters ate sandwiches, including from a kosher section, and local television station NY1 played on two large screens.

Matthew Fried, 66, a retired banker who lives on Manhattan’s Lower East Side, said he was a Goldman supporter, “otherwise I’d be in bed.” Fried, his wife and their two sons returned on Sunday from an upstate trip to make sure they would be able to vote, he added.

“I just feel he’s done a good job,” Fried said of Goldman. “He’s pro-Israel, he’s not BDS and he wasn’t afraid to jump on Trump when he needed to,” referring to the Boycott, Divestment and Sanctions movement against Israel.

Raymond Wang, 56, who lives on Staten Island and owns a business in Sunset Park, Brooklyn, called Goldman “a professional. He wants to help the working class,” Wang said.

To contact the editors responsible for this story:
at sbanjo@bloomberg.net