As the Biden administration ramps up its scrutiny of the cryptocurrency industry, a handful of small litigation shops are piling up class actions against crypto exchanges and digital token issuers, pursuing theories that could shape how decades-old laws apply to the emerging field.

Led by partners from boutique firms, lawyers have filed 58 securities class actions against crypto companies since 2016, according to a report from the consulting firm Cornerstone Research and Stanford Law School.

More than one-third landed in the past two years, and the pace surged in the first six months of 2022, when the industry’s market capitalization fell by $2 trillion before stabilizing.

Many of the complaints—targeting entities including Coinbase and Binance, two of the world’s largest crypto exchanges—allege that the trading platforms, coin issuers and other firms are shirking disclosure requirements mandated by federal securities laws and that they should be on the hook for investors’ losses.

“There was a crash and a lot of the excesses and abuses started to come to light,” said John Jasnoch, a partner at the firm Scott & Scott, which is litigating seven proposed crypto class actions.

It’s still unclear if the litigation will break any broad-ranging legal ground. Most of a rash of crypto class actions filed by two firms in April 2020 ultimately fizzled because of statute of limitations and jurisdictional issues.

“In a way, the space has a ‘more money, more problems’ thing going on, where it’s mature enough where it can attract attention from class action lawyers, whether that attention is warranted or not,” said Jason Gottlieb, a Morrison Cohen attorney who maintains a crypto litigation tracker and whose firm is representing defendants in two class actions.

“It’s very easy to copy and paste a complaint from one company to another,” he said. 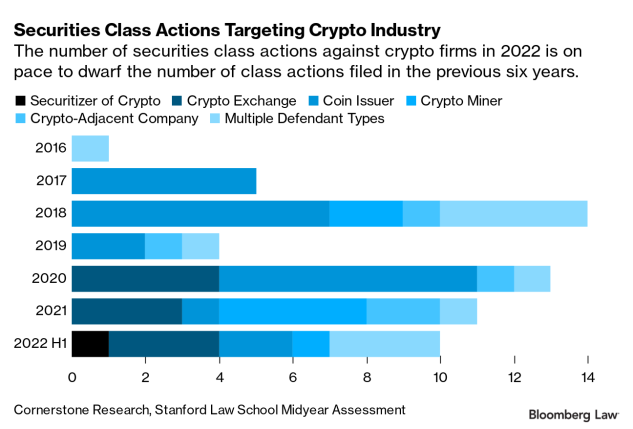 Lawsuits that have survived challenges so far include one crafted by Roche Freedman against crypto exchange Bitfinex and affiliate Tether, the company behind the Tether stablecoin. The suit accuses the companies of defrauding investors and causing billions of dollars in losses.

A New York federal judge, meanwhile, is weighing whether to greenlight a lawsuit filed by Selendy Gay Elsberg and Silver Golub. The suit claims that Coinbase facilitated the transactions of 79 digital tokens that it asserts are unregistered securities.

If successful, the lawsuit could potentially expose Coinbase to billions of dollars in damages. It would also undercut the company’s stance that no asset traded on its platform is a security, or an “investment contract” in which a person can expect profits to stem from the efforts of others.

But James Cox, a Duke University law professor who reviewed the complaint for Bloomberg Law, said the main allegation—that Coinbase failed to register as a broker-dealer or securities exchange—“has some really strong legs to it.”

“The fact that there were scores of different coins would not prevent the class being certified,” Cox said.

VIDEO: Tax Your Crypto and NFTs? Yes, the IRS Wants Its Cut

‘Cop on the Beat’

The proliferation of private litigation comes as SEC chair Gary Gensler pledges the agency will be a “cop on the beat,” protecting investors in the digital assets arena.

The agency brought 20 enforcement actions against crypto companies in 2021—Gensler was confirmed in April of that year—80% over the alleged sale of unregistered securities, Cornerstone found.

The SEC then made waves in July by bringing an insider trading action against a former Coinbase employee in which it identified several tokens traded on the platform as securities.

Last week, the Biden administration, in a series of reports, called for federal regulators to double down on investigating unlawful practices in the industry. The aggressive push is likely to provide further ammunition for class action attorneys, corporate litigators say.

Most litigants, however, are still waiting for courts to resolve foundational questions, such as whether certain cryptocurrencies are akin to traditional stocks and bonds and should comply with the disclosure requirements for securities.

Unless new legislation is passed by Congress—a bipartisan regulation bill is now wending its way through the Senate—the decisions could carry huge weight not just for the industry, but how both the SEC and plaintiffs bar move on the issue in the coming years.

Gensler has said his agency has authority over “crypto security tokens” and repeatedly pushed for companies to comply with securities laws, claiming that most tokens are securities.

Industry advocates have argued the space needs a clearer regulatory framework. Exchanges like Coinbase have repeatedly denied offering securities on their platforms.

The law firms taking on these companies aren’t among the well-known plaintiffs’ shops that often represent a proposed class in a conventional securities action, in part because of so few institutional investors in crypto, said Kayvan Sadeghi, a Jenner & Block corporate defense lawyer.

That has left a door open for upstart firms to seize lead positions in some of the biggest cases.

Other small shops are making big splashes outside the securities realm.

The lawsuits target the crypto company PoolTogether for allegedly operating an illegal lottery and decentralized finance platform bZx for alleged neglect that caused a $55 million theft on its platform. (Both have denied the claims and moved to dismiss them.)

“We took the time to study the technology and came to the view that [decentralized autonomous organizations] were operating in an area where they believe themselves to be free of American legal regulation,” said founding partner Charlie Gerstein. “Lots of them are causing lots of consumer harm. Second, we noticed that there was a very large volume of money changing hands. That presented an obvious financial opportunity.”

Firms like Selendy say they’re operating as a “complementary” force to the SEC examiners and other regulators applying broader scrutiny.

Launched in 2018 by 10 Quinn Emanuel expats, the firm splits its time between plaintiff and defense matters.

Philippe Selendy and Jordan Goldstein, who each have been involved in the firm’s crypto work, helped the Federal Housing Finance Agency win more than more than $25 billion in payouts from Wall Street banks following the mortgage-backed security crisis over a dozen years ago.

Goldstein said he sees parallels between that work and his new focus on alleged fraud in crypto.

“We saw the opportunity to start a litigation boutique that would be focused on cutting-edge matters that would not just benefit our clients but advance public interest where possible,” he said. “The crypto market seemed to present an opportunity to benefit investors through the legal system.”

Roche Freedman, launched in 2019 by attorneys from prominent litigation shop Boies Schiller, has been the most active firm in the crypto class-action space, filing more than a dozen lawsuits and serving as lead counsel in many of them.

Some of that work has come amid accusations—fueled by the August leak of secret recordings— that founding partner Kyle Roche worked with crypto startup Ava Labs to target competitors through litigation. Roche denied the allegation but has since left the firm’s class action practice and withdrawn from various cases, according to court records.

The firm, meanwhile, is fighting to remain lead counsel in its action against Bitfinex and Tether.

The past couple years have demonstrated that the industry is also investing in legal muscle to fight these actions, suggesting many cases, both public and private, face a long road to a resolution.

Crypto firm Ripple Labs has aggressively pushed back against the SEC in response to a 2020 enforcement action claiming its XRP token is an unregistered digital asset. The case is one of the key ongoing matters that could help define the broader crypto litigation and regulatory landscape.

Despite some of the recent turbulence, Wall Street has shown a greater interest in crypto this year, creating the dual screen of increasing litigation involving an industry still aggressively pushing to become more mainstream. And while the downturn seemed to flatten during the summer, the still-steep losses from the peak mean the crypto class action space figures to get more crowded.