Welcome back to the Big Law Business column on the changing legal marketplace written by me, Roy Strom. Today, we look at the rise of office-free (or office-lite, at least) law firms have thrived during the pandemic. Sign up to receive this column in your Inbox on Thursday mornings.

The law firm John Lively launched in 2018 with 11 lawyers wasn’t conventional—it’s called Practus LLP—but the concept wasn’t exactly novel, either. Its lawyers would work from home and they’d keep a larger share of the fees they collected, thanks to the firm’s lower overhead costs.

Four years and a global pandemic later, the Big Law firms that Lively poaches lawyers from have caught on to one of those ideas: Everybody knows they can work from home. But those large firms are struggling to cut one of their biggest costs. They’re stuck with long-term, Class A office leases that feel like gaudy stapler graveyards as lawyers resist returning to the office.

Now, alternative firm leaders are pitching their model as a way for individual partners to opt out of paying for high-priced space—which takes a chunk out of their profits—without the headache of fighting colleagues who want to cling to the status quo.

“It opened people’s eyes,” Lively said of the pandemic. “As these firms adopt policies to force people to come back in, you’re going to see many lawyers say, ‘I want to make a choice.’”

VIDEO: In December of 2021, leaders from some of the country’s biggest law firms shared their return to office plans and talked about whether hybrid work is here to stay.

Lively and other CEOs of “virtual,” “hybrid” or “remote” firms say more Big Law partners than ever are making the hop from their cushy offices to a brave, new world. Practus has hired 25 partners over the past two years, growing by more than 125%, as it picked up attorneys who’d previously practiced at firms like Foley & Lardner and Litchfield Cavo, as well as in-house at GlaxoSmithKline and PIMCO.

Today, more than 1,000 lawyers work under Practus-like, office-lite models across at least 10 firms, according to Bloomberg Law reporting. 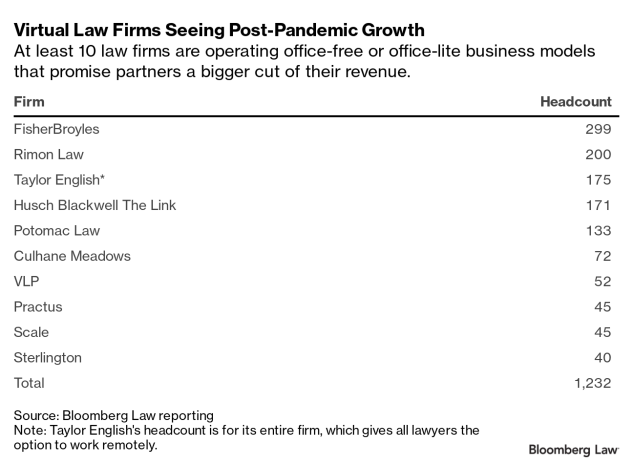 FisherBroyles is the largest, most well-known alternative firm. Its Big Law expat founders launched the firm 20 years ago and in 2020 cracked the ranking of the country’s 200 largest law firms by revenue. The self-described “distributed” firm last year brought in $136 million in revenue, up 30% from the prior year, and has nearly 300 lawyers today. It’s hired 50 partners in each of the last two years.

The firm’s financial metrics don’t match up easily with the traditional law firms it competes with in the AmLaw 200, mostly because every lawyer at the firm holds the “partner” title. But one number is telling: Its cost-per-lawyer is around $70,000, less than one-third of the next most frugal Big Law competitor, according to AmLaw data.

Like its non-traditional peers, FisherBroyles has a formulaic compensation system. Lawyers keep up to 80% of the revenue they generate, split between the attorneys who find the work and those who grind on those matters. But there’s no safety net: Partners don’t get any piece of matters they don’t bring in or work on, so they aren’t backstopped by anything other than the revenue they generate.

James Fisher, the firm’s co-founder, said he’s seen a surge in interest since partners became used to working from home.

“Once Zoom became the norm, the whole idea of having to be physically present was dramatically less important,” Fisher said. “And the fear partners had of their clients thinking less of them for working remotely was immediately swept away.”

To be sure, alternative firms today don’t pose a systemic threat to Big Law. There’s more than 105,000 lawyers at the 100 largest law firms by revenue, making the combined “cloud” movement a rounding error on the back of a $127 billion industry.

It’s impossible to know how much revenue these firms brought in last year—FisherBroyles is the only one that shared its revenue figures. A generous way to estimate the figure is to apply the revenue-per-lawyer figure that FisherBroyles reported: $461,000. That would put the group around a combined $500 million in revenue last year.

The actual figure is likely much lower, said Frederick Shelton, CEO of legal recruiting and rainmaking consultancy Shelton & Steele, who specializes in recruiting for these types of firms.

Only a handful of the virtual firms attract partners with large enough books of business to support such a lofty figure, he said. Some virtual firms exist to service the client roster of one or two rainmakers.

“They’re not living the high life,” Shelton said. “But a lot of people have flocked to the virtual and hybrid models during and after Covid because they realized they can be perfectly happy and make a very good income without having to sacrifice ‘little’ things, like their health or their family. And the AmLaws are still of a mindset that 60- to 70-hour weeks is completely acceptable.”

“Distributed” firms have historically recruited lawyers who don’t like or fit into Big Law for a variety of reasons. Many firms trace their origins to recessions in the 2000s, when propping up a website and working from home offices was a less-expensive way to start a business than renting space.

A common story: A partner develops a roster of clients inside a Big Law firm that he or she works on alone or with a small group. The partner chafes with the firm for providing little support, or the group sees it’s not being compensated fairly compared to peers. So they move to a virtual platform.

That narrative is changing. I spoke with two lawyers this week who’d made the move only because they’d grown so comfortable working remotely during the pandemic.

One lawyer declined to be identified so she could speak candidly about a former employer. She said she left a midsize firm in New Jersey once she realized that lawyers who chose to continue working remotely would be viewed there as “second-class citizens.”

“I’d been there long enough to know who was running the law firm and what they think,” the lawyer said. “And I knew if you don’t show up to work all of the time you’ll be seen as an attorney who’s not committed to the firm.”

She said she’s working longer hours without a commute and her income is up around 50% compared to her previous firm.

Steven Young has been a litigator for 48 years and was pretty much burned out by January 2020, when he’d decided to leave a midsize law firm in Southern California.

“I was running out of both appreciation for what I did and I was also frustrated because of the traditional ways traditional law firms, big or medium-sized, do their business,” Young said.

Then the pandemic hit, forcing Young to work from home for the first time in his career. He changed his plans: Instead of starting his own firm, Young joined virtual law firm Practus.

He says he’s lowered his billing rate from between $1,000 and $1,200 to $600 an hour. Even with the steep discount, he’s making more money than at his previous firm, Young said, thanks to the financial model that allows partners to keep up to 80% of the work they generate and handle themselves.

“I’m making more money per billed hour that’s collected, and I’m having enormous satisfaction practicing law,” he said. “It’s more satisfaction than I’ve ever known because I was always under someone’s thumb as an associate and I always had to answer to some other partner ever since I was a junior partner.”

Many lawyers in the virtual practice predict Big Law firms will have to shrink their office space by a significant amount in the future. Some are already planning to trim down. Duane Morris says it’s cutting 20% of its office space over the next five years and Clifford Chance’s next New York lease will be smaller by a quarter.

“Virtual partners” are a biased group, but they don’t see lawyers going back to the office five days a week anytime soon.

“It’s a very slow wheel to change,” said Chris Harrison, who left the M&A practice at Schulte Roth & Zabel in 2015 to found virtual firm Sterlington, which is now up to 40 lawyers. “If you’re looking two to five years ahead, you’ll see it’s a routine occurrence where partners will leave Big Law for this model. And if you look 10 years into the future, you’ll see them having adapted.”

On Ye’s Lawyers: Cadwalader Wickersham & Taft has parted ways with Ye, formerly known as Kanye West, in the wake of recent antisemitic remarks by the rapper and designer, Justin Wise reports.

On Sidley’s Life Sciences Play: Sidley Austin has grown its life sciences practice into a $700 million annual enterprise by poaching dealmakers from competitors and pairing them with the firm’s already deep regulatory bench, Meghan Tribe reports.