Judge Kimberly A. Moore will start as the Federal Circuit's chief judge on May 22.
Photographer: Perry Cooper/Bloomberg Industry Group

Incoming Federal Circuit Chief Judge Kimberly Moore is known for fostering relationships among clerks and judges, a style that could help bring together a court split over knotty legal issues.

“In cases of great importance to the court she’s able to use those relationships to build consensus. As chief she will have the opportunity to try to drive more consensus in the court,” said former clerk Melissa Brand, who is now assistant general counsel and director for intellectual property policy at the Biotechnology Innovation Organization.

Several thorny patent law issues have led to conflicting rulings among the Federal Circuit judges, creating uncertainty for practitioners and litigants. In particular, Moore could try to garner more consensus on the state of patent eligibility law, which has sharply divided the court in the seven years that Judge Sharon Prost has been chief. 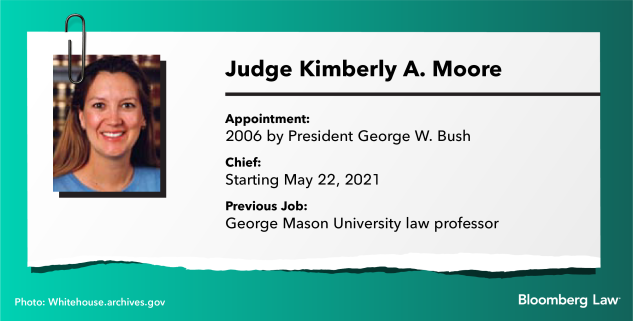 Prost’s term has been marked by major changes in patent law, which makes up the majority of the court’s docket.

Both judges declined requests to be interviewed for this story.

Brand describes Moore as someone “who really wants the best in everything"—her clerks, her writing, and her legal analysis.

Her opinions are exacting and colorfully written, putting her years as a law professor on display. Her dissent in the American Axle v. Neapco case on what inventions are eligible for patent protection called the majority’s opinion “validity goulash” that is “troubling and inconsistent with the patent statute and precedent.”

Moore’s known for being engaged at oral argument, asking tough questions of attorneys to make sure she understands the contours of a case.

“She’s very prepared, very direct,” Brand said of her oral argument style. “No one has ever accused her of being a shrinking violet.”

But Brand noted Moore can also take a joke and sometimes pokes fun of herself, which can put the attorneys appearing before her at ease.

“She cares so deeply about everything,” including family, her work, and the people that work for her and with her, Brand said.

The position is largely administrative—the chief makes decisions about court operations and rules changes, for example—but it comes with the perk of an office overlooking the White House and Washington Monument.

Former Prost clerks also emphasize that she treats the court like family and devotes herself to its work. 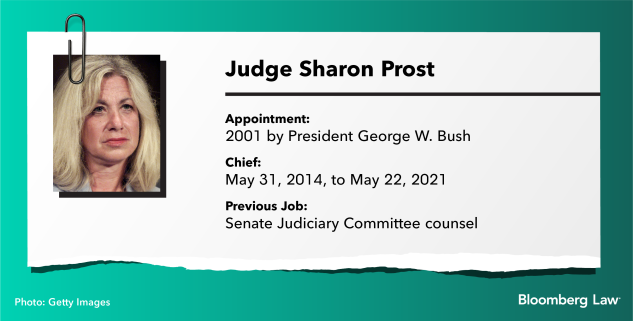 Prost “has really helped foster a culture of collegiality and camaraderie not only among the judges but among the broader Federal Circuit bar,” Haynes and Boone LLP attorney Angela Oliver, who clerked for Prost while she was chief, said.

Prost, who has held the position since May 2014, was never meant to be chief. She only became chief because her predecessor, Judge Randall R. Rader, stepped down from the court before the end of his term.

“If Judge Rader had served his full term she wouldn’t have been chief—she would have been too old under the statute,” David O. Taylor, who clerked for Prost before she became chief, said. “Judge Moore would have been up next.”

Taylor, now a patent professor at Southern Methodist University Dedman School of Law, referred to the statute that governs federal appeals court leadership. The position goes to the most senior judge in active service who is under 64. They serve for seven years or until they turn 70.

Right after Prost became chief in 2014, the U.S. Supreme Court issued its decision in Alice Corp. v. CLS Bank International, which upended the law on patent eligibility. About the same time, the first appeals of the then-new inter partes review system at the Patent Trial and Appeal Board were also hitting the Federal Circuit.

The last year has also been a challenge for court administration, with the court canceling its annual judicial conference and shifting to phone arguments because of the Covid-19 pandemic. It also had to deal with a series of protests, including over the killing of George Floyd in Minneapolis, outside the court’s building on Lafayette Square.

Under Prost’s leadership, the court undertook a major rewriting of its rules. “I’m sure that took an unbelievable amount of time and effort,” even if it’s not the kind of work people give the chief much credit for, Taylor said.

The makeup of the bench has been remarkably stable over the past seven years, with only Judge Kara F. Stoll joining the court. There is likely to be more turnover under Moore’s tenure, with one new judge already on deck, Taylor said.

When Moore takes over May 22, she’ll assume the chief’s duties, such as managing the en banc process and speaking on the court’s behalf.

She will also preside over any panel she sits on, even if more senior active judges are also on the panel.

The presiding judge gets to assign who will write the opinion, assuming they’re in the majority on a given three-judge panel or en banc court.

That could allow Moore to urge the court in her direction on patent issues where she’s diverged from Prost, including eligibility, venue, and “skinny labels” on generic drugs, which allow producers to avoid patent liability while selling the drugs for limited uses.

And then, of course, there’s that corner office.

Taylor Gooch, who clerked for Prost while she was chief, recalled his office in her chambers fondly. “I will never have a nicer office than the office I had as a clerk, overlooking Lafayette Square and the White House from a window in a gorgeous suite,” he said.