Coca-Cola general counsel Bradley Gayton is being moved to a consultant role less than a year after joining the company.
Photo courtesy of Coca-Cola

, under the leadership of its general counsel, Bradley Gayton, recently raised the bar for law departments’ outside counsel diversity requirements by promising to withhold 30% of legal fees from noncomplying firms.

“I feel an enormous sense of obligation to try to ensure that the profession is diverse, and I’m in a position where I feel an obligation to help deliver on that promise,” Gayton told Bloomberg Law.

He spoke with Bloomberg Law about the new diversity guidelines that Coca-Cola has developed for its outside firms, why these new standards are more effective than the status quo, and how they’ll impact Coca-Cola’s future law firm panel.

Bloomberg Law: Why did you create Coca-Cola’s new diversity standards for outside firms, including billing hour requirements for diverse attorneys and 30% payment penalties?

Bradley Gayton: Throughout my career, I have worked to make our profession more diverse and more accepting of differences in thought, experience, and perspective. I have personally traveled to firms, sat down with partners, worked through plans, and reviewed scorecards. I have probably spent thousands of hours doing this in the last five years alone. It’s incredibly disheartening to see stagnant progress and a precipitous decline in Black lawyers followed by new partner placemats proudly shared with no racial or gender diversity. It felt like the right time to try a new approach.

That is why I stepped back and started to think together with the great lawyers at Coca-Cola about what more we can be doing to really put ourselves in a position where we’re closing that gap and reaching parity sooner.

At a very high level I believe the answer is we have to create demand. Imagine the world if everyone in a business leadership position took a similar approach? We could fix the problem overnight.

BL: The new program includes requirements such as 30% of billable hours, and eventually 50%, having to go to diverse attorneys, including women, those with disabilities, and LGBTQ lawyers. Half of those hours must go to Black lawyers specifically. How did you reach these numbers and are they readily achievable for firms?

BG: If it’s ultimately 13% or 15% that would signal parity for Black lawyers, there’s no reason why we couldn’t achieve 30% diversity from a broader perspective. Even if it’s not achievable within the four corners of your firm or office, firms need to think about how they’re going to collaborate with others, with minority and women-owned firms, to pull out this diverse slate to serve us.

This 50% aspiration is something that I’m thinking we would want to start to push on in the next 18 to 24 months, to be honest with you. It sounds like a quick ramp up, but women in undergrad and law schools have been strong for a long time, probably trending on the other side of 50%. At this point, achieving that level should be completely possible. 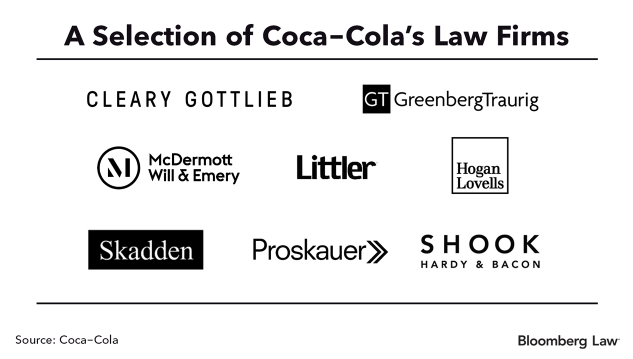 BL: Coca-Cola has said noncomplying firms risk losing the company’s business altogether and may not be included in the company’s new law firm panel. How large do you expect that panel to be, and what other criteria will you use to create it?

BG: We don’t have a number we’re ready to share yet. It probably won’t be everybody, but there’s a business side of this too. You’ve got to cull the number of firms and try to manage rates and all that, and there are the classic measures of the people that you want on your workforce, in terms of the “quality” metrics you’d be looking at.

What legal services do we need around the world, and who’s best to meet those needs? What kind of law firm? Does it need to be a global law firm? Does it need to be a national law firm, or are small regional firms fine? What kinds of arrangements do you need to have financially? There’s a range of those factors that we will go through as a team. In addition to that, we are also spending time trying to get to know firms that aren’t currently doing work with Coca-Cola as well.

I am more inclined to let the case handlers pick their outside counsel. These lawyers are empowered. They have very large mandates, and they’re accountable for delivering results. They’re ultimately going to be the ones that pick, but those decisions have to sit inside of a framework that we all agree on. What’s important from where I sit is not that I’m going to be picking law firms, but that I will drive a discussion about the framework, and then from there, we can let people pick firms within those parameters.

BL: A key piece of Coke’s new program is that you will withhold 30% of a firm’s fees if they do not comply, and that amount is nonrefundable. Will this steep fee penalty deter other general counsel from adopting the same program?

BG: Let’s say they don’t do 30%. Let’s just pretend they did 10%. I think what’s important is to set it up as more than just a toll. Adopt the whole framework with whatever penalty you think makes sense. That’s fine. But then, set a limit for how many times that penalty can happen before you’re having a discussion about whether or not this is a firm that shares your values and should be a firm that is supporting your company. Adopting the complete framework is more important to me than what number people might pick because I think it’s the framework that is going to create the demand that’s required here.

BL: You also created the Ford Law Career Academy when you were at Ford, which aims to encourage diverse high schoolers to pursue legal careers. Why did you create that program?

The pipeline initiative was important because as we looked at the data, Black people in this country are roughly 13% of the population, but what you saw over time is the number of Black lawyers really starting to stagnate, maybe at roughly 5%. I was concerned that over time that would start to decline, so we really wanted to step back and see what small contribution might we make to try to make an impact here. We thought, “Let’s reach down to high school and see if we can start to get Black students to imagine what it might be like to consider the law as a career.”

I’m not involved with how Ford will carry on and execute the program in Detroit, but I am talking to my colleagues at Coca-Cola, about how we might be able to scale the program and maybe support our law firm partners who don’t have pipeline programs to embrace this is as a program they might be able to implement in their cities.