‘s unexpected removal of its top lawyer has put the company’s ambitious diversity standards for outside attorneys in limbo as questions are raised about whether race-based staffing requirements can be legally enforced.

The diversity standards Bradley Gayton put in place in January, just months after Coca-Cola hired him, are being reviewed by his successor, Monica Howard Douglas, after the company ousted Gayton last week. The policy among other things requires outside law firms to staff at least 30% of new matters with diverse attorneys.

“It’s a laudable goal,” said Julie Levinson Werner, a partner at Lowenstein Sandler LLP who advises businesses on employment law matters. “But the standards of Title VII have been in place for almost 60 years and they haven’t changed. When the law says an employer can’t treat people differently or unfairly based upon their race and gender, that still applies.”

The questions are being raised as an advocacy group, the Project on Fair Representation, plans a lawsuit if Coca-Cola does not publicly walk back the initiative, according to a source familiar with the group’s thinking. The group’s lawyers include former George H.W. Bush administration official Boyden Gray.

The group and its lawyers have also discussed the situation with attorneys who may be affected by the policy and could be potential plaintiffs in a suit, according to the source. The group, which is also challenging a Nasdaq proposal to require board member diversity for companies listed on the exchange, calls Coke’s outside counsel diversity program an illegal “racial quota.”

Coca-Cola declined to comment. A representative for Gayton did not immediately respond to a request for comment.

An issue in the debate are two landmark laws meant to combat discrimination: Title VII of the Civil Rights Act of 1964 and 42 U.S.C. Section 1981.

Law firms working for Coke that make race-based hiring and staffing decisions to comply with the diversity requirements may open themselves up to a lawsuit under Title VII, according to employment lawyers. Those firms can’t use Coke’s preferences as a shield.

The Project on Fair Representation says Coke itself is violating Section 1981’s ban on discrimination in private contracting.

A potential flaw in Coca-Cola’s approach is that the policy imposes specific diverse lawyer percentage requirements, according to Werner and Samuel Estreicher, a law professor at New York University.

“If you have them, you are asking for trouble,” Estreicher said. “I understand the frustration to see more progress here, but you can’t wave a wand and make it happen.”

Companies instead consider focusing on expanding the candidate pool in the hiring and staffing process, Werner said. She pointed to the Mansfiled Rule, which some firms use to ensure that diverse lawyers account for at least 30% of those considered for leadership roles and other opportunities.

Gayton’s initiative was hailed as a much needed push for diversity in a legal industry in which people of color remain largely underrepresented.

Black lawyers make up 2.1% of all law firm partners across the country, according to data compiled by the National Association for Law Placement. Asian (4.1%) and Hispanic (2.8%) attorneys also account for a fraction of total partners.

Gayton announced the outside counsel diversity standards in a Jan. 28 letter to law firms. The company works with several outside operations, including King & Spalding, Littler, Proskauer, Cleary Gottleib and Greenberg Traurig.

Under the policy, of the new matters that go to diverse attorneys, at least half of that billable time must go to Black lawyers. The company had said it would hold back up to 30% of legal fees for firms that don’t meet the standards.

“One of the ways Coca-Cola says you are going to earn our business is by saying, ‘These are the values we care about,’” said Laura Beth Nielsen, a sociology professor at Northwestern University, who focuses on law, inequality, gender, and race. “No firm has a right to business. The law firm has to earn that business.”

Yet the future of the new policy is in question after Gayton’s dismissal and a company statement that said his successor, Douglas, was examining it. “We fully expect she will take the time necessary to thoughtfully review any plans going forward,” the company said in a statement earlier in the week.

Coca-Cola has not publicly explained why it bounced Gayton from the general counsel role, and into a lucrative one-year deal as a “strategic consultant,” after less than eight months on the job. 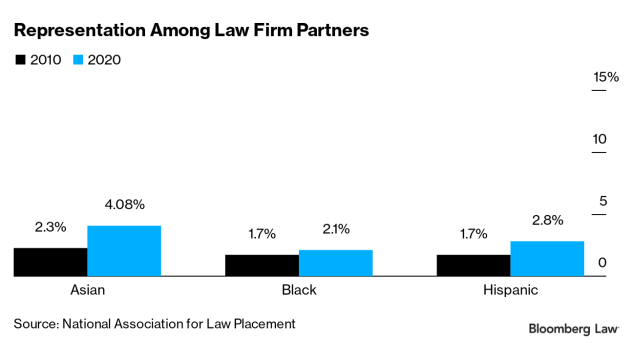 Although the Coca-Cola diversity initiative caught wide attention across the legal industry, the company is far from the only one to begin such efforts.

Since 2018, pharmaceutical company AbbVie Inc. targets that half the partners staffed on its matters will be women and 25% of partners will be from underrepresented communities. In 2017, HP Inc. also began requiring outside firms to staff at least one diverse attorney on its cases or face a 10% fee reduction.

Kim Rivera, HP Inc.’s former chief legal officer and current special advisor to the company’s CEO, called the arguments against diversity guidelines like Coca-Cola’s “odd” and “radically out of context.”

“That’s why you have companies and law firms trying to come up with ways to drive diversity, equity, and inclusion through programs like the one that we implemented in HP,” she said, adding that the program has reached 100% compliance.

Microsoft Corp. launched its law firm diversity program in 2008, offering annual bonuses to firms that increase the overall diversity of the attorneys staffed on Microsoft’s matters. Six years after the program was implemented, the company says the percentage of its diverse outside attorneys had risen from 33% to over 48%.

The Equal Employment Opportunity Commission, which polices workplace discrimination, has said companies can implement affirmative action plans to eliminate racial imbalance in traditionally segregated jobs, as long as the plan is temporary and does not trample on “interests of the non-minority employees.”

Such policies give wide berth to companies like Coca-Cola, said Tsedale Melaku, a postdoctoral research fellow at the City University of New York. She questioned whether Project on Fair Representation and other critics of such policies would be successful in a legal challenge.

“They’re saying ‘racial quotas,’” said Melaku, author of the book, “You Don’t Look Like A Lawyer.” “I’m hearing ‘hiring goals, and diversity, and affirmative action policies’” that the EEOC has approved.

Melaku said the debate over the legality of Coke’s program is a distraction from the ultimate goal.

“If it really does come down to the legality of it all, why are we not using that close, meticulous perspective when we’re thinking about the way that particular groups are marginalized in the legal profession?” she said. “There should be an easier way to get this done.”