A cybersecurity lawyer tied to ’s 2016 presidential campaign lied to the FBI about why he was providing a tip on a suspected link between then-candidate and a Russian bank, a federal prosecutor told jurors on the first day of a politically charged trial.

concealed the identity of his client while trying to convince the Federal Bureau of Investigation to open a probe into what he described as a suspicious communications link between computer servers and Alfa Bank, Assistant U.S. Attorney Deborah Shaw said Tuesday in Washington. 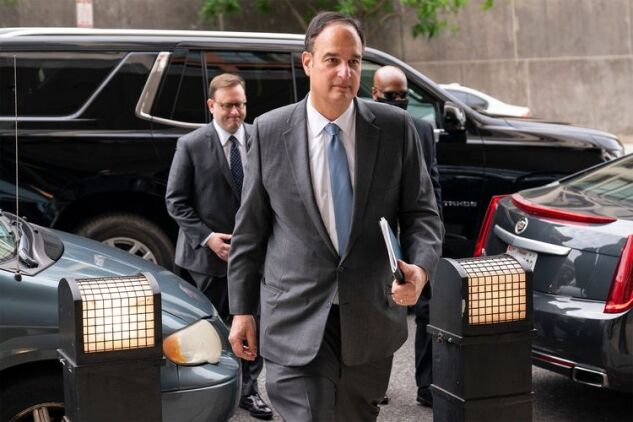 The alleged lie was part of a broader effort by Sussmann and the Clinton campaign to sway members of the media to report on the suspected link and damage Trump before the election in a so-called “October surprise,” Shaw said in an opening statement to the jury.

It’s the first trial stemming from Special Counsel ’s probe into the origins and conduct of the FBI’s Trump-Russia investigation, which Trump has long argued was a “witch hunt” based on false information. That probe culminated in a report by Special Counsel , who identified numerous contacts between Trump and Russia while not finding collusion.

No Reason to Lie

Defense attorney , in his opening statement, disputed the government’s allegations. Sussmann had no reason to lie to the FBI about his clients when he provided the tip in September 2016 because the agency was well-aware of his links to the Clinton campaign and Democrats, Bosworth said.

Just a few months before meeting with investigators, the had hired Sussmann, a former federal prosecutor, to represent the party in the FBI’s probe of Russia’s hack of DNC servers, Bosworth said. And Sussmann received the server data from another client, Rodney Joffe, a top cybersecurity expert who worked for years with the FBI.

“At a time when questions were swirling about Donald Trump’s connections to Russia,” one of Sussmann’s “longtime clients came to him with information showing another potential connection between Trump and Russia -- a connection that showed weird contact between Trump and a bank run by an associate of ,” Bosworth said. “Mr. Sussmann took that seriously.”

To convict Sussmann, prosecutors must convince jurors that the lawyer’s alleged lie to the FBI was material to its investigation into Trump and Russia. If the alleged lie had no discernible impact on the probe, then the jury may clear Sussmann.

A conviction will likely be used by Republicans to portray Democrats as dishonest conspirators. It also may bolster Trump’s potential 2024 run for the White House by giving weight to his claims that the Russia probe was bogus, even though the Sussmann case is limited to a single charge of lying to the FBI about the identity of his client.

An acquittal will likely be used by Democrats to portray Republicans as grasping at straws to discredit Mueller’s investigation, which outlined possible ways that Trump may have obstructed justice by interfering with the probe.

In her opening statement, Shaw urged jurors not to let their political views sway their decision, saying the case was only about Sussman “using and manipulating the FBI.”

“Some people have very strong feelings about politics and Russia,” Shaw said. “And many people have very strong feelings about Donald Trump and Hillary Clinton.” But the criminal case is not about them, she said. “We are here because the FBI is our institution, it should not be used as a political tool for anyone, not Republicans, not Democrats, anyone,” Shaw said.

The jury will hear from former FBI General Counsel James Baker, who met with Sussmann and who received a text message from the lawyer saying he had information to offer that wasn’t on behalf of any client. Jurors also will hear from various FBI agents who worked on the probe; employees of the company that generated the data on the alleged communications link at Trump Tower; , a top election lawyer for Democrats; and , Clinton’s campaign manager.

The government argues Sussmann’s strategy at the time of the alleged lie was to create news stories about the Alfa Bank issue, get law enforcement to investigate it and “get the press to report on the fact that law enforcement was investigating it.” That all culminated in a late October tweet and press release by the campaign about how Clinton trusted the FBI would investigate it.