Cleary Gottlieb Steen & Hamilton is planning a new office in Silicon Valley, according to people familiar with the effort, as it joins Wall Street rivals in pursuing growth from the technology sector.

The firm is targeting merger and acquisition dealmakers to help it start the Northern California office in the coming weeks or months, the people said. Cleary has been considering the move for at least a year, they said.

Northern California has been one of the hottest markets for lawyers, attracting a number of elite M&A law firms in recent years. Despite fierce competition for talent and a scant record of success growing sizable local offices, New York-based managing partners see tech companies as continuing to have an outsize role in the U.S. economy.

It’s unclear if Cleary would have to staff the office with new recruits or have existing partners relocate there. The new location would be the firm’s third in the U.S. and 17th overall. Cleary’s most recent office openings were in 2012 in Seoul, South Korea and Abu Dhabi.

The firm, which reported more than $1.2 billion in gross revenue to The American Lawyer last year, was founded in New York in 1946 and employs around 1,100 lawyers. Its tech clients include Nvidia Inc. and Alphabet Inc.'s Google.

Cleary is one of a small group of elite law firms that uses a “lockstep” compensation system, paying partners largely based on seniority rather than a market-based rate. It has reportedly joined other firms in modifying those systems to retain young stars and allow more flexibility in hiring partners from competitors.

Law firms’ Silicon Valley migration is the second wave of moves from New York that last happened in the 1990s. Firms have also become more willing to open offices in new locations since adapting to remote work during the pandemic. 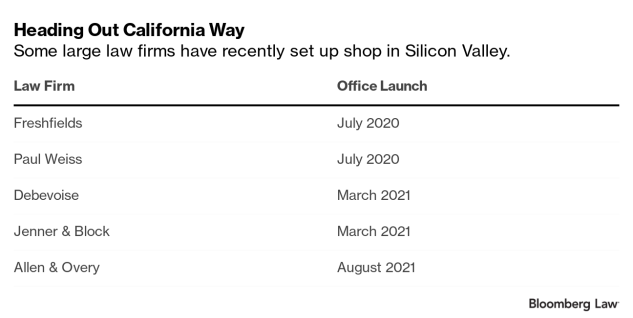 But developing a major presence in Silicon Valley has eluded many firms with ambitions to move there. The market is expensive, and the area has an insular culture that is wary of New Yorkers’ brash style and a dearth of high-profile dealmakers compared with the East Coast.

Once there, New York’s elite law firms have not always prospered. The first firms that opened offices in the 1990s have never grown to rival the firms’ New York headquarters by headcount.

Even without a local office, Cleary has become a go-to adviser for technology companies, whose deals require antitrust review by global regulators, particularly in the European Union. U.S. lawmakers are also taking a tougher regulatory tack toward tech companies, with multiple bills winding through Congress.

Cleary has advised Santa Clara, Calif.-based chipmaker Nvidia on matters including its pending $40 billion acquisition of U.K.-based competitor Arm Ltd. The firm represented Nvidia in obtaining in 2019 the sign-off from the EU’s competition regulator for its $7 billion purchase of Mellanox. The Arm deal is currently going through the same process.

Google has turned to Cleary for numerous acquisitions, including some that required EU sign-off.

Most recently, the firm shepherded Google’s $2.1 billion acquisition of Fitbit, which endured a 15-month EU competition review. Cleary defended the search giant in 2017 against a nearly $3 billion antitrust fine leveled by the EU, accusing the company of rigging its search results to favor its own products.

The firm has been a longtime adviser to T-Mobile US Inc., which last month hired Cleary partner Mark Nelson as its new general counsel. Cleary has also reportedly been hired by digital payments company Stripe Inc. to advise on early-stage initial public offering work.

As for its litigation practice, Cleary’s federal court work is overwhelmingly based in New York, where it has made 747 appearances since 2007, according to a Bloomberg Law docket analysis. The firm has made 83 appearances in California during that time, second only to the Empire State.

To contact the editor responsible for this story: at copfer@bloomberglaw.com; John Hughes in Washington at jhughes@bloombergindustry.com