The fight to overhaul law firm ownership limits is moving to California after the American Bar Association sided against major changes.

State lawmakers are set to vote before the end of the month on legislation that would allow the California bar to test new legal service models to make them more affordable. An amended version of the bill would still prevent non-lawyer companies from co-owning firms, however, and ban the sharing of legal fees with non-lawyers.

The bill, which reflects some of the same concerns expressed by the ABA, eliminates a threat to firms posed by possible competition from major corporations like the Big Four accountancies. If passed, the measure would also prevent firms from going public or taking investments from litigation funders and others.

William Farrell Jr., litigation financier Longford Capital’s co-founder and managing director, noted there’s “significant resistance” to overhauling law firm ownership rules in the Golden State. “But I suspect that efforts will survive such resistance and California will eventually loosen its regulations,” he said.

Any changes to ownership rules in California could have a more sweeping impact on the competitive landscape than tinkering already underway in other states.

Arizona has scrapped its rule barring fee-sharing between lawyers and non-lawyers, while Utah two years ago initiated a ‘sandbox’ program to test new legal ownership models. 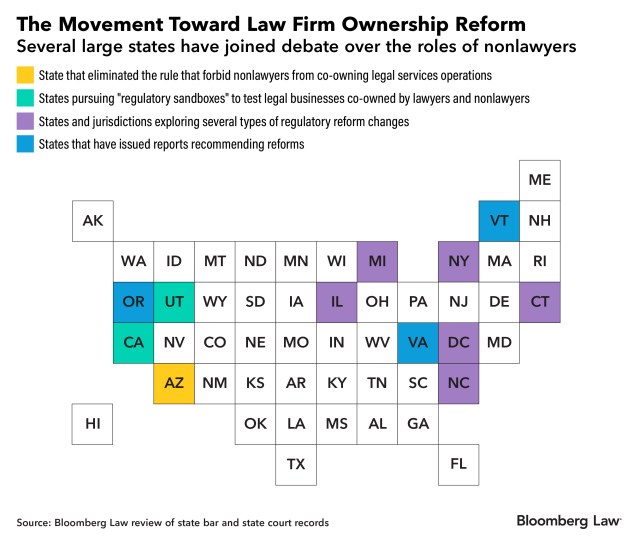 In those states, “we’re seeing a wide range of new entities that couldn’t exist under current rules in California,” said David Freeman Engstrom, a Stanford Law School professor and member of an ABA access to justice working group.

The new entities include everything from nonprofits that use trained non-lawyers to help resolve medical debt, to a tech platform that provides bilingual legal help to Latino small businesses. Participants also include legal services companies Rocket Lawyer in Utah and LegalZoom in Arizona, through a subsidiary called LZ Legal Services.

State bar leaders and others, like California Chief Justice Tani Cantil-Sakauye, have expressed concern over the legislature’s efforts to restrict the scope of the state’s sandbox.

The pending measure is part of state bar funding legislation. It would ban “corporate ownership of law firms and splitting legal fees with nonlawyers” as part of the sandbox plan.

The California legislature could further amend the bill, AB 2958, to make its proposed sandbox open to a greater variety of types of businesses—but time is running out, given that lawmakers need to make final votes on the measure by Aug. 30. The bill would then go to California Gov. Gavin Newsom (D) for his signature.

The ABA House of Delegates on Aug. 9 passed a resolution urging states against loosening restrictions on the sharing of legal fees with non-lawyers, or sharing law firm ownership. Non-lawyer ownership is “inconsistent with the core values of the legal profession,” the resolution states.

Bar groups from New York, New Jersey and Illinois, and two other ABA units, proposed the non-binding resolution. It was amended before the vote to encourage state bars to propose innovations to make legal services more affordable and accessible.

The conference before the amendment had been set for a lengthy fight over the resolution’s wording and its message to states, said Toby Rothschild, an ABA working group member who attended the conference, and recent ABA past president Patricia Lee Refo, a Snell & Wilmer partner in Phoenix who introduced the amended version of the measure for a vote.

“But for the amendment, there would have been an epic debate,” said Refo.