A "regulatory sandbox" experiment aimed at increasing access to justice in California could open the door to more competition for law firms.
(Photo by ClassicStock/Getty Images)

A California State Bar group is divided over whether to limit a test of new legal service delivery models to organizations that serve low-income residents or broaden the experiment to a wide range of businesses.

“There appeared to be support” for restricting participation to organizations that focus on access to justice for “the unserved and underserved,” according to a memo last month summarizing discussions within the 20-person group.

But several members of the Closing the Justice Gap Working Group object to the narrow focus. They say allowing profit-driven companies to provide legal services could spur innovation throughout the system, even if the businesses focus directly on wealthy clients.

“To exclude corporate clients on the ill-informed view that they get enough, or get good enough, legal services shows the risks that come from a narrow or inwards looking view of the legal market,” group member Crispin Passmore wrote.

What the group ultimately decides may limit disruptions to California’s legal services market—or embolden them. That includes the possibility of allowing the Big Four accounting companies to more directly compete with large law firms.

The direction the group sets for the state, given its overwhelming size, economic strength, and legal-market importance as a bellwether, could have an outsize influence on the rest of the country, said Jordan Furlong, a Canada-based legal sector analyst.

“Significant regulatory change to the legal sector in California would be a seismic event, one that would almost certainly trigger rolling changes across the United States for years to come,” wrote Furlong in a recent blog post.

The working group’s divisions, evident for the last several months, have included how to define the scope of the experiment, which the group calls a “regulatory sandbox,” and its main purpose.

If the sandbox can support legal service businesses that aid middle class residents with debt problems, “that’s going to have a fairly direct path to the rest of the low-to-moderate, middle-income people,” panel member Toby Rothschild, a volunteer of-counsel to the legal aid nonprofit OneJustice, said at the group’s April 9 meeting.

If the project instead focuses on businesses that help corporate attorneys file Securities and Exchange Commission statements, “I don’t think that that’s going to have as much chance at downward assistance, at least in my lifetime,” Rothschild said. 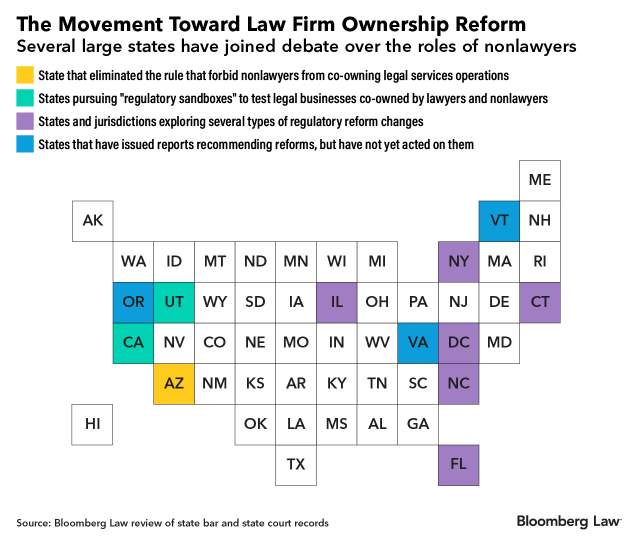 A 2020 report commissioned by the state bar found the legal services gap is “widespread, pervasive, and multifaceted.” State residents receive “no or inadequate legal help” for 85% of their civil legal problems, it found.

But those who disagree with the targeted approach say the whole market needs change. The sandbox, therefore, should be open to all types of alternative legal service businesses.

Alternative approaches could include legal service operations owned by non-lawyers. They could range from Big Law firms who bring on non-attorney technologists or accountants as equity partners, to “people law” operations like Legal Zoom or Rocket Lawyer that focus on consumer law applications.

“To limit the sandbox to only those applicants who will be serving individuals who have limited means to pay for them seems to me to be setting it up to fail,” said Bridget Gramme, a working group member and public interest law professor with the University of San Diego School of Law, in written remarks to the panel.

Gramme said in an interview that research into various legal sandboxes in different countries, including the U.K., has shown that to promote innovation, it makes the most sense to keep the structures as open as possible, “especially at the beginning.”

The working group is part of a California State Bar effort that began with the commissioning of the legal market landscape report from William Henderson, a professor with the Indiana University Maurer School of Law. The bar’s Board of Trustees then established the Access Through Innovation of Legal Services task force, known as ATILS, in July 2018, after it received Henderson’s report.

The task force’s mission was to study online legal service delivery models to determine if changes might increase access to justice while protecting the public. Any changes would have to be approved by the Bar’s Board of Trustees before taking effect.

For the last several years, arguments over possible system reform have included several of the same actors on different sides who moved from ATILS to the sandbox working group.

The proposed changes, including the possibility of expanding long-standing law firm ownership and fee-sharing rules beyond attorneys, prompted more than 400 comments, mostly from in-state attorneys at smaller law offices who are dead-set opposed to change.

Despite the opposition—and lobbying campaigns from both sides—the Board of Trustees approved the notion of a sandbox a year ago on a 9-2 vote.

A sandbox could lead toward “revolutionary” changes to the system, Sean SeLegue, a partner with Arnold & Porter Kaye Scholer in San Francisco, then the board’s vice chair and is now its chair, said during a contentious debate leading up to the decision.

One consequence of rule reform could prompt an evolution in the way the Big Four accounting firms—Deloitte, EY, PwC, and KPMG—compete in the American legal market. This has concerned some in Big Law, given the accountancies’ strong tech focus and massive revenues.

An unrestricted California sandbox wouldn’t be a trojan horse for the Big Four “to come in and start attacking” the legal profession, working group member Andrew Arruda said at the April 9 meeting.

California wouldn’t be the first state to test a legal services sandbox. Utah’s Supreme Court unanimously approved that state’s two-year pilot program last August. It now includes Rocket Lawyer and about two-dozen other legal service providers that also are mostly consumer-facing. The court earlier this month added another five years to the program, citing innovations the program has already spurred.

Arizona took a different—and arguably more radical—path last August, when its Supreme Court eliminated state ethics rule 5.4. The rule had barred nonlawyers from having an economic interest in a law firm.

In Canada, British Columbia also is experimenting with a legal sandbox, and Ontario may follow suit.

The California working group is next scheduled to meet June 18. That panel’s scope subcommittee, tasked with recommending how broadly based the sandbox should be, will be meeting next on June 4. The working group’s recommendations are due to the Bar’s Board of Trustees in September of 2022.