More than half of California test-takers passed the July bar exam, despite wide-reaching technical glitches.

The 53% pass rate for the July test was down 8% from the previous summer edition, the state bar announced Friday.

The bar said 31% of those who took the exam experienced problems. The 1,298 applicants who were affected by technical issues and didn’t pass will be able to request that their July 2021 exam fees be applied to the February 2022 or July 2022 exam, or fully refunded.

While a scoring adjustment was made, bar Board of Trustees Chair Ruben Duran said, “it was clear that there’s no way to fully quantify what impacts these issues had on examinees. We decided that offering a credit or refund to those who were affected and were unsuccessful on this exam was the right thing to do.”

A total of 7,931 applicants took the test, including 7,742 who sat for the exam remotely. It was the third time the test was largely conducted remotely. The test-taker total was down from 8,723 in October 2020 and 7,764 in July 2019, before the coronavirus outbreak began, according to bar figures. 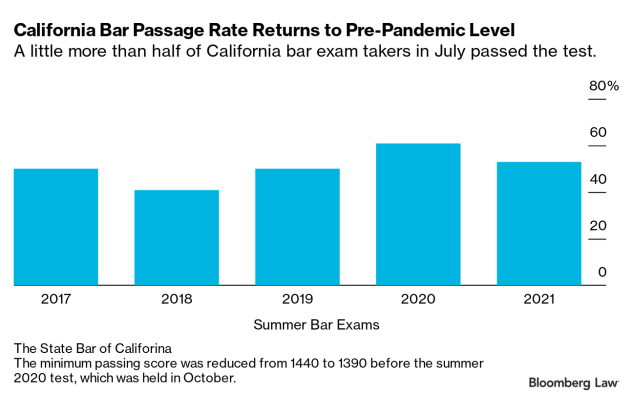 Nationwide, the mean scaled score on the Multistate Bar Exam (MBE) fell to 140.4, a decrease of 0.7 percentage points from July 2019, the last comparable MBE for a July exam, the California bar said. Declines also were recorded in Texas and New York.

“We heartily congratulate the 3,995 applicants who passed the General Bar Exam and the 180 candidates who passed the Attorneys’ Exam, particularly after facing and overcoming the challenges of preparing for and taking the exam amid the extraordinary impacts of the pandemic,” bar Executive Director Leah Wilson said in a statement.

The National Conference of Bar Examiners and state bar officials have cautioned against comparing the July 2021 results with those from October of last year—the first-ever tests to be remote-proctored and held online in about 30 states and Washington, D.C.

The October 2020 test, delayed four months, took place as the pandemic raged across the country and involved smaller pools of candidates who took a shorter exam. That exam also was the first test graded using a streamlined system designed to improve efficiency.

California reported two big spikes in its pass rates in its two most recent tests before July, in part a reaction to the California Supreme Court dropping the “cut score” needed to pass the test from 1440 to 1390 in August last year.

The overall passage rate for the October 2020 test rose to 60.7% from 50% for the July 2019 test, according to the state bar. Nearly three out of four first-time test takers passed, a rate that jumped 10% from the July 2019 first-timer pass rate, to the highest level in 12 years.

The pass rate for California’s next online bar exam, in February, likewise was up just more than 10% from the February 2020 test, which 26.8% passed.

Online bar exams have been marred by reports of tech glitches. In California alone, use of the remote proctoring software resulted in more than 3,000 of the 9,000 test takers initially “flagged” for problems that included possible cheating. Only 47 test-takers ultimately were implicated.

Several states are currently trying to determine the best way to license lawyers in the future.

A blue-ribbon commission in California is attempting to answer several questions about its exam—including whether it’s the right way to determine whether would-be attorneys are competent to practice law.

The NCBE also is looking to overhaul at least a portion of the twice-yearly test used by California and several other states, in an attempt to make the exam more relevant to the practice of law.

In January, the state bar approved a plan to expand its existing Provisional Licensure Program, which allows certain attorneys who have not passed the bar exam to provide certain legal services for clients, including appearing in court and drafting legal documents.

Bar exams in every state will be held in person starting in February, subject to restrictions from state or local public health authorities.