If you had a scintilla of doubt that women of color, particularly Black women, face a special blend of racism and sexism, these hearings should put it to rest.

I am trying mightily to find nuggets of humor in the Supreme Court confirmation hearings for . But it’s not easy.

True, there were a few flashes of comedy—like when (R-Texas) trotted out blowups of illustrations of babies in diapers from a children’s book that he found objectionable. (Cruz is often funny—unintentionally.)

But aside from that interlude of levity, the hearings left me profoundly depressed. Though we now expect Supreme Court nomination hearings to be contentious, partisan affairs, this one struck me as uniquely toxic and mean-spirited. And yes, that has to do with Jackson’s gender and race.

As the first female Black nominee to the Supreme Court, Jackson will likely loom large in our nation’s history. But during the hearings she was bullied, interrupted, and disrespected.

If you had a scintilla of doubt that women of color, particularly Black women, face a special blend of racism and sexism, these hearings should put it to rest.

In ways oblique, blatant, and often wacky, most Republican members of the committee delivered this message: Underneath her Ivy League veneer, Jackson is a dangerous Black woman with an agenda that threatens our neighborhood, our children, and the American way of life.

Here’s how that insidious message breaks down:

Jackson is simpatico with terrorists and child pornographers.

Republicans made this point loud and clear: She cares more about criminals than law-abiding citizens.

(R-S.C.) professed horror that she defended Gitmo detainees when she worked as a federal public defender and later as an associate at Morrison & Foerster, suggesting that she was responsible for unleashing terrorists.

But what Sens. Graham, Cruz, (R-Mo.), and other Republicans really dwelled on were the sentences she handed out to viewers of child pornography, which were more lenient than what the federal guidelines had set. 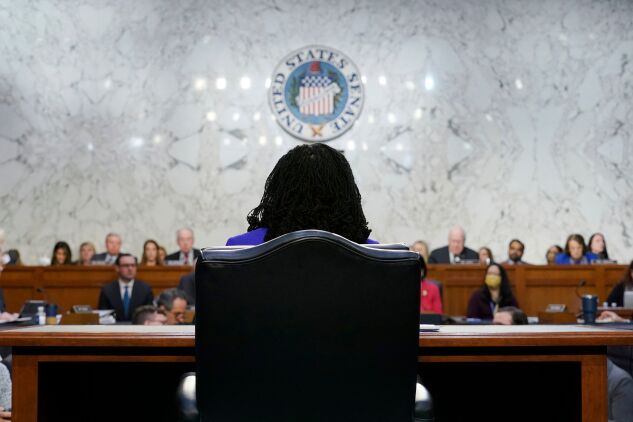 Though Jackson offered a well-reasoned explanation—the guidelines are outdated and it’s up to Congress to change them—the GOP members practically made it sound like she was in cahoots with child pornographers (hello Pizzagate). At several points, Hawley claimed that she had “apologized” to a convicted child pornographer in delivering her sentence.

The subtext: Jackson has a soft place in her heart for criminals, including the most abhorrent sort. Is that because she’s part of that community?

She will inject critical race theory into our courts, our schools, and our drinking water.

Cruz went to town on critical race theory, pummeling Jackson about her role as a board member of Georgetown Day School, where the curriculum, he claimed, “is filled and overflowing with critical race theory.” He cross-examined her about the school’s program and her views on CRT as if she was covering up a terrorist plot that could destroy civilization as we know it.

Of course, CRT is irrelevant to her work as a judge—which Cruz, himself a former Supreme Court clerk, knows damn well. And who cares what’s taught at some fancy private school? But to Cruz it’s political gold to connect her to the boogeyman issue of CRT. After all, she is Black—and aren’t all Black people hell-bent on forcing CRT down our throats?

She will jeopardize womanhood and destroy White privilege.

(R-Tenn.) posed one of the most bizarre questions at the hearing, challenging Jackson to define “woman.” (She deflected the question and said, “I’m not a biologist.”) But what was Blackburn getting at? That putting Jackson on the court will mean that trans girls will dominate the cheerleaders squad?

Blackburn didn’t stop there. She told the nominee: “You serve on the board of a school that teaches kindergartners—five-year-old children—that they can choose their gender and teaches them about so-called white privilege,” adding that the school “pushes an anti-racist education program for white families”—which she found troubling.

A White Southern woman lecturing a Black woman on womanhood, race, and White privilege—how funny is that?

What’s also rich is that some of Jackson’s detractors had the chutzpah to project themselves as guardians of racial equality, as if they could teach Jackson a thing or two about what prejudice really means.

Just before he attacked her for being a stealth CRT queen, Cruz quoted Martin Luther King Jr.'s speech about how children shouldn’t be judged by “the color of their skin.”

And how noble that Graham felt compelled to complain that two other Black female judges—Janice Rogers Brown (a judge on the U.S. Court of Appeals for the District of Columbia Circuit) and (a U.S. District Court judge in South Carolina, whom Biden also considered for the Supreme Court position) weren’t treated fairly by liberals during their careers—as if Jackson had stolen their seats. (Query: Is there a quota on how many Black women can be elevated to the federal bench?)

Another weird moment: when (R-Texas) asked Jackson if she had “celebrated” ’ nomination to the Supreme Court in 1991—as if that’s some sort of a litmus test. (She said “yes”—which was apparently the right answer because Cornyn dropped the topic.)

If there’s one silver lining about this circus it is that no one on the Judiciary Committee suggested that Jackson lacked the intellectual chops for the job. That’s because it’s so crystal clear that she’s more than qualified for the job of Supreme Court justice. If we’ve learned anything from this ordeal it’s that she’s far smarter—not to mention more rational and far more dignified—than her detractors.

Which brings me to this question: What is the point of slamming and demeaning an abundantly qualified candidate to the Supreme Court—particularly one who’s on the brink of making history? I understand that Cruz, Hawley, and others have presidential aspirations and want to score points with their base, but it’s hard to believe that their rabid attacks against Jackson will play well in the long run.

Word to the wise: Stop the nonsense.

To contact the editor responsible for this story: at karaya@bloombergindustry.com

Vivia Chen
Columnist
Crime Focus at Jackson Hearing Most Intense Since Marshall
Jackson Gets ABA Backup as Panel Rebuts Soft-on-Crime Claims (3)
The Next SCOTUS Justice Will Be a Black Woman. Deal With It.
The First Black Female SCOTUS Nominee Must Be ‘Twice as Good’
© 2022 The Bureau of National Affairs, Inc.
All Rights Reserved