Buchalter APC is looking to grow after turning the corner on a long court battle with a former client.
Bing Guan/Bloomberg

Buchalter APC, after settling a decade-long legal battle last year, is re-solidifying its status as a formidable player in Southern California and elsewhere on the West Coast.

The firm has bolstered its revenue by more than a third over the last three years, boosted profits, and expanded headcount by picking up lawyers from midsized peers.

“Buchalter has had a vision to build a regional and national platform by merging with similar-sized firms or smaller firms for some time,” law firm consultant Peter Zeughauser said. “Firms that have a plan are appealing to laterals, and there aren’t many firms like Buchalter’s size that have a real long-term plan.”

The firm’s forward movement comes more than a decade after heirs to the late Edgar Stueve’s Alta-Dena Dairy fortune sued the firm and competitor Berger Kahn. The heirs alleged that an elaborate scheme by Buchalter shareholder J. Wayne Allen destroyed much of their wealth.

After a trial, the firm ultimately settled with the Stueves in April 2020, minutes before an appeals court was set to hear arguments.

Although the Steuves case attracted attention in the local legal industry, ethics attorney David C. Carr, who was an expert witness for Allen, told Bloomberg Law he doesn’t believe the lawsuit has had lasting effects on the firm’s reputation.

“This was a pretty interesting case in our circle of people, but the public at large, I don’t know that they really followed stuff like this very closely,” said Carr, who’s based in San Diego. “My guess is that probably Buchalter wasn’t affected at all by what happened at trial.”

Buchalter continues to expand its footprint in the Northwest: A downtown Seattle office opened in February 2019, shortly after the firm bought the Portland, Ore., based business firm Ater Wynne.

The Ater Wynne acquisition brought about 25 attorneys to Buchalter. It followed the firm’s opening of a San Diego office in November, its first major move since the fraud trial ended about six weeks earlier. 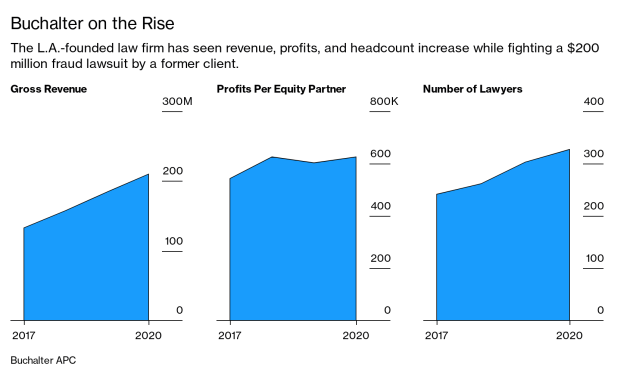 The firm has also made some notable additions to its Orange County office. M.C. Sungaila, a prominent appellate attorney, joined last August from Haynes and Boone, and Joshua Robbins, a former assistant U.S. attorney, jumped ship from Greenberg Gross.

Buchalter continues to push for a national reach “as a full-service firm with diverse practice areas that can weather all parts of an economic cycle,” firm CEO Adam Bass told Bloomberg Law.

The firm enjoyed a $25 million spike in revenue last year. Bass credited “a significant portion” of the spike to the October 2019 merger with Ater Wynn, as well as a diversity of practice areas that includes intellectual property, corporate law, financial restructuring, real estate and healthcare.

“None of these groups depends on the others, and if one group is down, the other groups carry the day,” Bass said.

Though its revenue growth suggested a banner year, Bass said the pandemic made early 2020 “extremely stressful,” with the switch to working from home “requiring a significant capital expenditure.”

The firm’s securing of a $9.2 million loan through the federal Paycheck Protection Program last year helped. Buchalter is one of a handful of law firms nationally that secured one, and Bass said it saved “numerous jobs.”

“Many of our clients’ businesses were completely disrupted,” Bass said. “Our workforce was not equipped for an immediate shift to remote work, and as a result, there was substantial time and expense spent transitioning to a remote work environment and taking measures in the offices to protect our essential workers.”

Pamela Webster, Buchalter’s chief financial officer, told jurors something rarely heard from a law firm leader when she took the witness stand in September 2018: The top brass at Buchalter overlooked concerns about a lawyer’s billing practices because they didn’t want to upset his friend who was a rainmaker for the California firm.

J. Wayne Allen was shielded because of his ties to Martin Florman, Webster testified in the Stueve heirs’ $200 million lawsuit accusing the company of fraud.

Webster said then-CEO Rick Cohen was worried that Buchalter would be forced to close its struggling Orange County office if Florman, who was hired with Allen from rival Berger Kahn in a package deal, headed for the exit.

Allen took the Stueve files with him to Buchalter when he jumped ship in 2007.

Buchalter leaders forced Allen to resign in 2010 after problems grew from the billing issues described by Webster. Allen also allegedly had lied about loaning himself money from the estate.

Allen settled with the estate for $1.25 million, to be paid by an insurer, just before the 2018 trial began. He has denied any wrongdoing and said in a deposition that the Stueve family owed him an apology.

Novell agreed to a $200 million judgment that was never collected.

Berger Kahn also settled, leaving Buchalter as the only defendant during the 16-day trial.

The firm’s defense team from the California-based Greenberg Gross went up against the Stueves’ lead attorney Robert E. Barnes, a sole practitioner whose other clients include rightwing provocateur Alex Jones. Barnes predicted damages of more than $150 million.

But a jury sided with Buchalter, and the firm settled with the Stueves in 2020 to thwart an appeal.

Allen is now based in Texas and remains a member of the California bar. He declined requests for comment. He also paid $1.25 million to settle a separate lawsuit by the Stueves.

Webster is still at Buchalter, while Cohen retired in 2020. Florman, the rainmaker, also remains with the firm as the managing shareholder of the Orange County office.

To contact the correspondent on this story: Meghann M. Cuniff in Los Angeles at meghann.cuniff@gmail.com.