Brownstein Hyatt surpassed the $60 million mark in federal lobbying revenue in 2022, leading a pack of Washington law firms that saw another windfall from government relations work.

The law firm and lobbying shop earned $61.6 million in Lobbying Disclosure Act revenue, a record total for the firm and up 9% from the previous year, according to a Jan. 20 filing by Brownstein Hyatt Farber Schreck. The firm’s biggest clients last year included Talos Energy, Athene Holding and Apollo Global Management.

The past two years on Capitol Hill have been lucrative for lobbyists, as major bills targeting Covid-19 and bolstering US infrastructure reached the finish line. The landscape has shifted with Republicans taking control of the House, and companies that turn to small armies of lobbyists feeling the squeeze of an economic downturn.

K&L Gates partner Karishma Page challenged “the narrative that nothing will happen” in a divided Congress.

“There are a number of pieces of legislation that are either annualized or expiring,” Page said in an interview. “We’re going to see a pattern where those packages serve as vehicles for a host of other issues.”

Akin Gump for the second consecutive year raked in over $53 million in lobbying fees. Holland & Knight, whose clients include Smithfield Foods and the Gulf Energy Alliance, said its federal lobbying revenue was about $43.4 million in 2022, a 24% spike from the prior year. 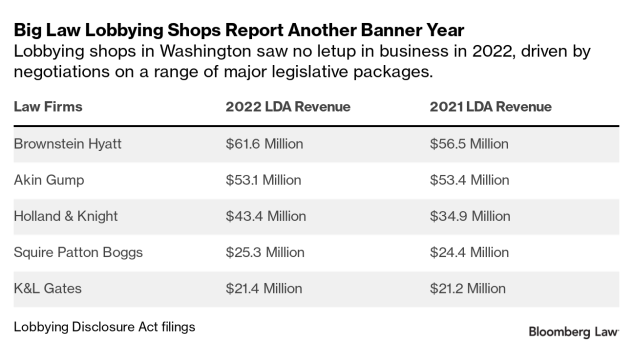 Wide-ranging legislation has helped drive lobbying activity over the past two years: the $1.2 trillion infrastructure package, the $437 billion tax and climate bill, and the Chips and Science Act, which will devote $52 billion to spur US semiconductor production.

‘Flat Will be the New Up’

The farm bill, as well as the Federal Administration Aviation and defense reauthorizations, are among the top agenda items for lawmakers and lobbyists in the coming year, said Page, the K&L Gates partner.

Other issues expected to get the business community’s attention include the federal debt ceiling, competition with China, and new oversight priorities from House Republicans.

The “nonstop” pace on Capitol Hill over the last three years will slow in the new Congress, said Rich Gold, Holland & Knight’s public policy leader. Still, he expects the firm’s lobbying revenue to remain in the same ballpark as last year.

“Flat will be the new up,” Gold said in an interview.

Corporate cost-cutting in response to a looming recession also could impact Washington lobby shops. Page said some clients will be paying closer attention to their spending, given the broader economic uncertainty.

“What the last few years have really shown is that engagement in Washington is an investment that requires consistency,” she said. “That is going to continue in the long term.”

The hire is among a slew of high-profile moves from Congress to the private sector in recent months.

Holland & Knight also earlier this month brought on former Rep. Ed Perlmutter, (D-Col.), who recently retired after eight terms in the House, as a partner in its public policy group.