Baker Botts, Greenberg Traurig, and Kirkland & Ellis are among the U.S. firms the London-based BP has named, according to a company statement.

The panels for two other geographic regions includes firms such as Dentons and Simmons & Simmons in the U.K., and Baker McKenzie in Singapore, BP said. Firms including Arnold & Porter and Freshfields Bruckhaus Deringer will manage the oil and gas company’s global matters.

“The selection process comprised of a competitive bid process focused on rates, commitment to diversity & inclusion and capability relevant to the energy transition,” BP said in the statement. 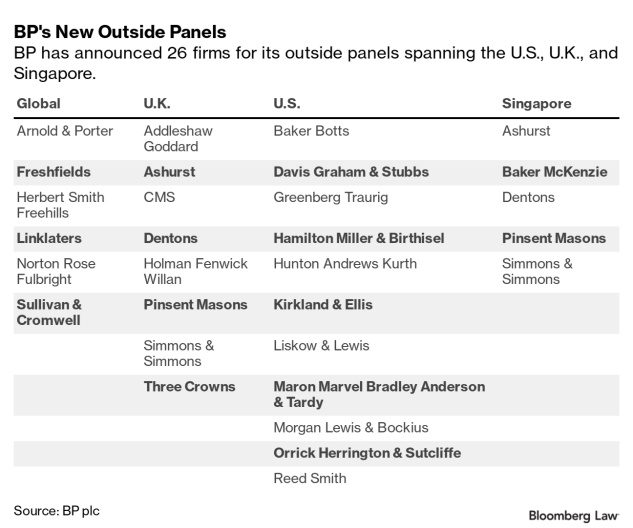 The selection of firms marks an increase from BP’s previous system of two legal panels—one for the U.K. and one for international operations. The American Lawyer first reported the new panels.

Many of the panel firms, like Baker Botts, have previously advised BP on matters such as its $5.6 billion midstream Alaska business sale to Harvest Alaska last year.

BP in May, along with other major energy companies, won a Supreme Court case that could push climate liability cases to the federal court system. That could be more favorable to the energy industry.