Boies Schiller Flexner is rewarding top billers with annual bonuses as high as $165,000, a welcome surprise for associates in what has been a quiet bonus season.

The “extra-extraordinary” bonuses start at $40,000 for the class of 2022 who billed at least 2,600 hours, according to a Boies Schiller memo Bloomberg Law viewed.

As transactional markets slowed late in the year, there has been uncertainty as to how large bonuses would be. Most firms haven’t disclosed what they’ll do. Baker McKenzie and Boies Schiller are the only firms to make year-end bonus announcements so far.

At Boies Schiller, those who don’t qualify for top-biller payouts will see bonuses between $20,000 for first-year lawyers and $115,000 for senior associates, matching the scale Baker McKenzie announced last week.

The targets are identical to last year’s scale set by Wall Street’s Cravath, Swaine & Moore. The class of 2022 will receive a prorated $15,000 bonus, according to the Boies Schiller memo. 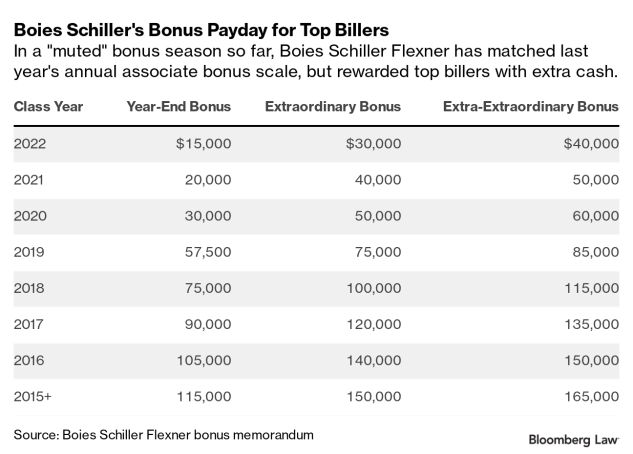 A report by Thomson Reuters earlier this month said that if work continues to slow, law firm management could find themselves “under immense pressure” to cut headcount, “much the same as in 2008-2009.” Layoffs have already been reported at Cooley, Kirkland & Ellis and Gunderson Dettmer.

The firm gives associates the choice of opting into either the market bonus approach or the firm’s formula compensation system.

In its bonus memo, Boies Schiller’s managing partners noted that its associates are “predominantly” on the formula compensation system. The firm created the tiered system “so that high-performing market associates are not disadvantaged,” according to the memo.

‘The Sky is Not Falling’

Firms that have yet to announce bonuses will probably size them in line with the scale announced last year, Loanzon and Major, Lindsay & Africa recruiter Summer Eberhard said.

“There is also an opportunity for firms that have had a successful year to come over the top for associates that have exceeded expectations,” Eberhard said.

The bonuses send a message that the industry is well-positioned despite the economic circumstances, Eberhard said. They also show that while there have been layoffs, not all firms are similarly situated, she said.

If the trend continues of exceeding market bonuses for top billers, Eberhard said, “it is a positive signal to associates that may be worried about the industry as a whole that the sky is not falling.”

Loanzon said she wonders how many associates will receive bonuses at Big Law firms if they’re being tied to high billable hours requirements, given the economic uncertainty and slowdown, especially in the corporate sector.

“It’s one story announcing bonuses, but if we tie it to a billable hours requirement where a majority of associates are not going to meet that requirement and will not earn a bonus, that’s unfortunate,” she said. “It’s almost as if the firm is not giving out a bonus.”

(Updated with comments from Eberhard and Loanzon throughout)