Black general counsel lost 6% of their representation within the Fortune 1000 last year, according to a new survey, even as the legal industry and major corporations made broader pushes for increased diversity.

The Minority Corporate Counsel Association’s latest annual Fortune 1000 survey released Monday indicated that the nation’s highest-revenue companies generally have made only limited progress growing diversity atop their law departments. But Black lawyers had the hardest time in 2020, with a net loss of three general counsel seats.

“The numbers are beyond disappointing,” said Jean Lee, president and CEO of the MCCA, adding that she was surprised Black lawyers lost seats after a year filled with discussions around race and social justice. “I know that there is change coming. I’m positive about the change that’s coming. But this certainly derailed some of my positivity.”

The new MCCA data provides an unusual glimpse into general counsel diversity, at a time when corporate D&I efforts are in the spotlight, but questions linger as to whether the momentum will continue. A recent Bloomberg analysis, for instance, showed discussion of racism and social justice by executives on S&P 500 company earnings calls has slowed significantly since Q3 of 2020.

The engagement of the top brass in diversity efforts is often noted as a key component to their success, whether in a law firm or a company.

“It’s not just enough to have a diverse workforce, we need diverse leadership, because we know when we have a diverse leadership, we can have the conversations we need to have at the highest level within the organization.” Lanesha Minnix, chief legal officer of Flowserve Corp., and a participant in Bloomberg Law’s The Black General Counsel Project, said in the MCCA survey report. 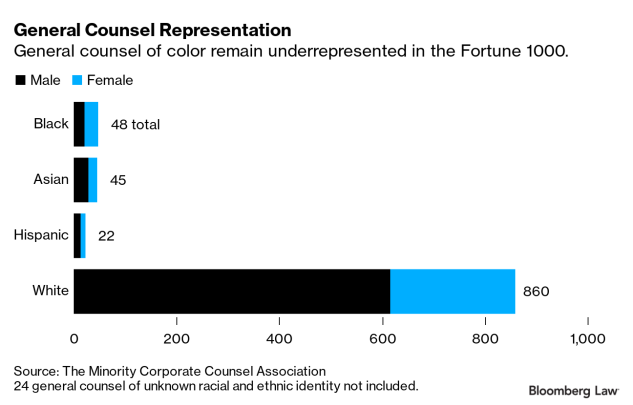 Last year’s backwards step in racial diversity might be explained by a lower level of turnover at Fortune 1000 general counsels’ offices compared to previous years, according to the report. While there were 216 open legal chief openings in the Fortune 1000 in 2019, there were 139 in 2020, and many of those roles went to White lawyers.

Out of 118 opportunities for companies to pick a lawyer of color to succeed a White general counsel, only 19, or 16%, made the switch, the report said. In comparison, over 78% of openings made by lawyers of color departing their jobs were filled by White lawyers.

There was more progress on gender diversity. Female general counsel increased by 2.36%, which includes a net gain of eight seats within the Fortune 1000 for White women, the report said, for a total of 296 female legal chiefs.

“White women lead the charge for change with a 35.34% rate of filling available seats that were not previously female,” the report said.

In the longer view, the report said, minorities have made significant gains over the years when it comes to representation among Fortune 1000 general counsel.

“In 2004, the number from GCs of racially or ethnically underrepresented backgrounds stood at just 43,” the report said, a total that’s nearly tripled in the last 16 years.

It’s also likely that in the future the general counsel role will continue to become more diverse, based on the trends in data and the demographics of current law school students, the report found.

“The coveted spot of general counsel does not enjoy the elasticity that comes with more entry level positions. Rather, the pipeline begins decades before,” according to the report.

Sonya Olds Som, a partner at legal recruiting firm Heidrick & Struggles, said in the report it takes “quite some time to grow a GC,” but the industry shouldn’t become discouraged.

“It’s funny, there’s always a lot of talk about diversity fatigue,” she said. “So, for some people, a certain amount of cynicism or bitterness can set in. I personally just refuse to give in to that.”

Other findings in the survey include: