Welcome back to the Big Law Business column on the changing legal marketplace written by me, Roy Strom. Today, we look at Big Law’s chances of growing profits in 2022. Sign up to receive this column in your inbox on Thursday mornings.

What goes up must come down. It’s a lesson seemingly every financial asset is reminding us lately. So many early “pandemic darlings”—Netflix, Peloton, Zoom—that surged as Covid-19 took hold and people stayed home aren’t looking like they’ve won much of anything, two years later.

Big Law profits are next at risk of faltering from record highs. Large firms were always bound to be victims of their own success—and overwork. Now they are facing rising costs and growing economic uncertainty, too.

Big Law firms aren’t publicly traded. The closest equivalent the industry has is the annual release of AmLaw’s profits per equity partner.

That figure, set to be reported next month, will no doubt show the booming value of holding equity in the world’s most prestigious law firms. Many of the numbers reported by AmLaw so far have been staggering. Cooley, for instance, told AmLaw the firm’s profits per partner rose nearly $900,000 from last year—a 28% increase—to $4 million.

It’s possible that average profits per partner across the AmLaw 100 could have grown as much as 20% last year. That’s on top of 13% growth in 2020. It’s a huge jump from the more recent trend of 6% profit growth in the previous three years.

If profit growth comes in at 20%, the unexpected pandemic boom would have earned the average AmLaw 100 partner about $460,000 more over the last two years than if profits had grown at their longer-term trend line. 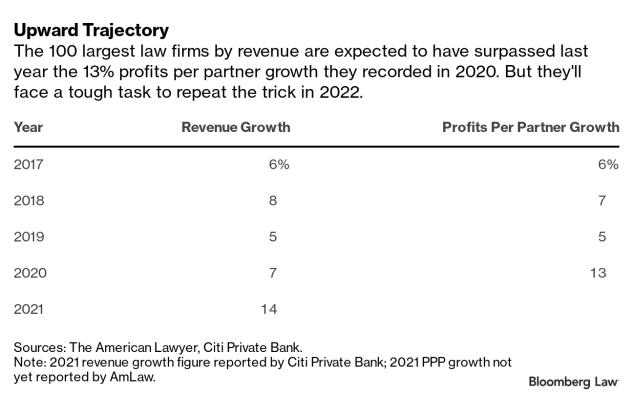 Is there any chance the current profit levels are sustainable? I asked four law firm consultants this week, and none of them was terribly optimistic.

“It certainly will be really hard to repeat any kind of growth,” said Lisa Smith at Fairfax Associates. “Firms will struggle to match this year’s results, and that might be possible, though it’s going to be hard. I can’t imagine any firms will be able to move forward with 20% to 30% growth in profitability.”

The economic environment is growing cloudy on multiple fronts.

Russia’s invasion of Ukraine has spooked markets, my colleague Sam Skolnik reported this week. Two weeks passed without an initial public offering in the U.S.—the longest drought since 2009, Bloomberg reported. Covid cases are spiking again in China and Asia. And the U.S. Federal Reserve has started to raise interest rates.

“Those and other factors are question marks hanging over the minds of many law firm leaders who are otherwise cautiously optimistic about another strong year,” said Kent Zimmermann at Zeughauser Group.

Publicly traded companies that benefited from new consumer trends during the pandemic are suffering so much now because they failed to temper investor expectations for what would happen when the world opened back up.

Peloton is perhaps the best example. The company “got trapped in its trillion-dollar fantasy,” as Bloomberg Businessweek put it.

Managing partners will face a similar messaging challenge. They’ll need to convince partners that lower profits aren’t an inherent failure—they’re to be expected.

“If you are going to see more moderated levels of revenue growth together with an acceleration of expense growth, that is of course going to result in moderation of profit growth numbers the industry sees this year,” said Gretta Rusanow, head of advisory services for Citi Private Bank’s Law Firm Group.

In other words, partners shouldn’t get trapped in their own trillion-dollar fantasies. What went up will probably come back down. On the bright side, that also counts for the long hours lawyers have been putting in.

On Big Law and Russia: Dentons and DLA Piper cut ties with their Russian offices, and AmLaw reports all 25 Big Law firms with outposts in the country have pulled out since its invasion of Ukraine. That’s led to spats in courtrooms. Jenner & Block said Russian bank Sberbank shouldn’t be allowed to pause a discovery deadline while it replaces its lawyers from White & Case and Debevoise.