An ongoing pay war is making lawyers at some of the top firms in the world more money than ever before. It’s also exposing a growing fault line between the richest firms and everyone else.

In just a few weeks, Milbank LLP, Davis Polk & Wardwell and Cravath Swaine & Moore all announced a series of compensation increases that saw annual pay soar by 13% to $415,000 for their most senior associates.

As the salary scales reach new heights, many of the top performing law firms have quickly moved to match—seeing it as an imperative in the tightening battle for top associate talent. Now, a small group of the richest firms appears to be pulling away from the pack.

“The firms that can match the Cravath salaries are making a point of setting themselves apart,” said Katherine Loanzon, managing director at legal headhunter Kinney Recruiting. “They’re telling the market they’re considering themselves part of the elite firms,” she said.

Some firms can easily bump salaries to keep up. For others outside of a select tier, the barrage of raises is a risky proposition.

Many firms matched last year’s associate salary increases and bonuses—whether because of competitive market forces or for the appearance of prestige—but the latest round of pay boosts poses a fresh threat to their finances. It may have some opting out and looking at other tools in their recruitment arsenals.

‘Elite Firms Have No Choice’

Milbank got the salary war started in January, announcing a new scale that increased pay for first-year associates to $215,000 a year. Second, third- and fourth-year associates saw their salaries jump $10,000, under that scale, while midlevel and senior associates saw a $20,000 jump, reaching $385,000 at the highest end.

Davis Polk came over the top a few weeks later, bumping up the Milbank scale for fourth- through eighth-year associates by 3%. Less than a week later, Cravath announced its scale, which surpassed Davis Polk for mid-level and senior associates.

In the days following Davis Polk’s announcement, many of the top firms were quick to follow suit. In the week since Cravath announced its new scale, at least 28 firms have matched that benchmark. Of those firms, at least 16 are among the top 30 law firms in profits per equity partner, according to 2020 figures by the American Lawyer.

There has been an increasing chasm between the top performing 5% to 10% of law firms and everyone else, said Janet Stanton, a partner at law firm management consultancy Adam Smith Esq. Associate compensation is yet another example of the divide.

“The elite firms have no choice—they have to match. This is just cost of entry,” she said. 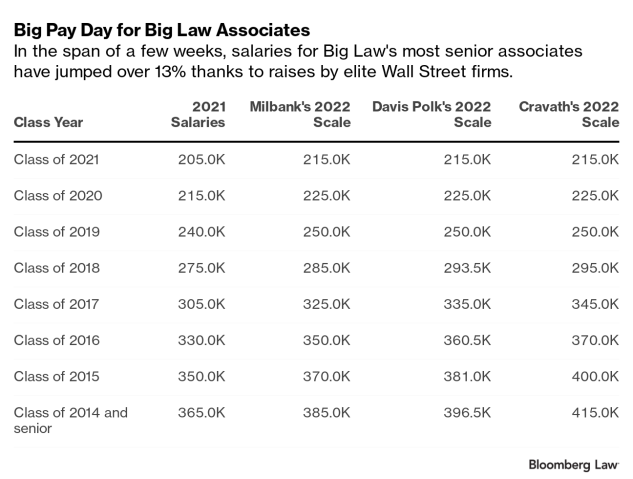 But not everyone plays in the same sandbox. That has already led to a rift among firms in partner compensation, with some offering partners $10 million a year or more, said Kent Zimmermann, a consultant for law firm management at the Zeughauser Group.

“We are at a point when the market for associate compensation is segmenting just as it did for partner comp previously,” Zimmermann said.

Expenses driven by compensation are starting to grow faster than revenue at some firms, according to Zimmermann.

Associate salaries stayed flat for three years before firms upped the pay scale in 2021. Salaries have now jumped by more than 22% at the most senior end in less than two years.

“The problem will get more acute for more firms when the economy softens,” Zimmermann said.

The moves have come with new financial pressure for those regional and smaller firms to match to keep their talent. They’ve also been forced to consider raising billing rates for their clients, said Shannan Rahman, an Atlanta-based managing partner of legal recruitment firm the Partners Group.

Cravath and other firms were “pretty smart” to focus on boosting pay for midlevel and senior associates, Rahman said.

“That’s when they’re the most vulnerable, either to be poached by another firm or to do something different,” like take an in-house job in a company’s legal department, she said.

Associates at that level looking to move in-house typically know they’re taking a pay cut, but they could justify it in the past by also knowing they were likely to work fewer hours, Rahman said. Now, they’re looking at losing out on as much as $200,000 a year if they make the jump.

Still, Rahman said not all of the partners at the largest 50 firms that she talks with are immediately buying in on the latest round of pay raises.

“They’re kind of putting their hands up like, we don’t want to play this game,” Rahman said. “Particularly at firms that aren’t the Cravaths and that have that level of profit, I think you’re going to get more and more pushback from partners.”

Stanton, the consultant, said law firms need to know who they are and where they stand in the market.