Overworked and stressed, associates should be challenging the status quo, radically realigning their lives, and telling Big Law to go to hell. Right?

Who hasn’t fantasized screaming, “Take this job and shove it!” at the office (or on Zoom) and quitting in a blaze of glory?

In the last year or so, people have been doing just that—more or less. According to the U.S. Labor Department, a staggering 4.4 million quit their jobs in September. And Harvard Business Review reports that employees between the ages of 30 and 45 saw the largest jump in resignation rates, with an average increase of more than 20% between 2020 and 2021.

If there’s a segment of the workforce that should be ripe for “The Great Resignation,” it should be the lawyering class, particularly those in the associate ranks—Millennials and Gen Zers—who’ve been working like dogs during the pandemic. Stressed and anguished, they’re also famous for being outspoken about telling their bosses exactly what they want.

Given all that they’ve been through in the last 18 months or so, are they finally fed up enough with Big Law to jump ship?

Yes, says Mark Weber, Harvard Law School’s assistant dean for career services. “We know it’s happening because we’re getting calls from alumni who are saying, ‘everyone around me has left and I’m drowning.’ Firms are paying enormous bonuses to retain associates because that’s still cheaper than leaving business on the table.” Despite all the monetary goodies, Weber says the workload is “not sustainable.” The big question, he adds, is whether lawyers will drop out permanently.

What’s indisputable is that the legal market is sizzling and lawyers are bouncing around like pinballs. “Folks are certainly moving about, both from one firm to another and also back and forth between in-house and law firms,” says James Leipold, the head of National Association for Legal Placement. He adds that NALP’s upcoming annual lateral recruiting report “will certainly confirm that lateral partner and associate hiring is way up.” 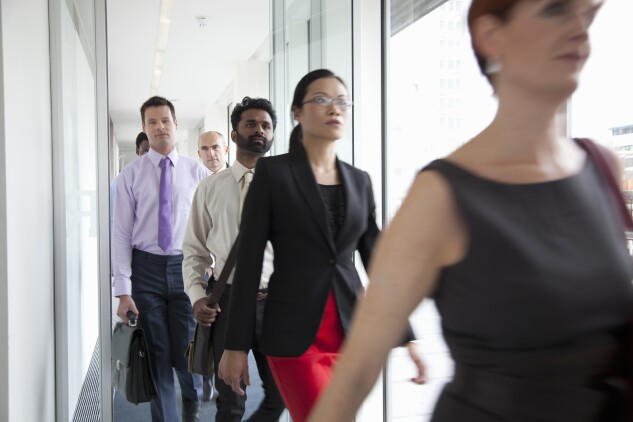 Despite all the commotion about how Big Law can’t hold onto its talent, lawyers are still flocking to major firms. “Big Law is retaining more of its talent than it has in the past,” says Adam Oliver, the CEO of Firm Prospects, an intelligence company that analyzes law firm hiring. “It’s keeping 17.71% more of its attorneys within the Big Law ranks in 2021 than we saw in 2019”—before the advent of COVID. (Firm Prospects tracked almost 12,000 moves in 2021 and almost 11,000 moves in 2019.)

Indeed, in my talks with recruiters, law school career counselors, associates, and law firm administrators, the news flash is that Big Law’s “Great Resignation” is a big trickle. “People are looking for change but they’re not going off the grid,” says Michele Fivel, a recruiter with Major Lindsey & Africa. “It’s more like the Great Reshuffling,” sums up Oliver.

How anticlimactic. I’m not saying that all law firms are the same but how soul-altering is it to go from Davis Polk to Simpson Thatcher, or Skadden Arps to Latham Watkins?

Call me a romantic but I had imagined associates resigning en masse to do some kind of “Eat-Pray-Love” thing. I thought this was the moment when young lawyers would seek a radical re-alignment of their lives and tell Big Law to go to hell.

In fact, I asked: Does anyone know of Big Law types who’ve decamped to start a yoga retreat, goat farm or knitting shop?

“God, no,” responds Margie Boone, Harvard Law’s director of alumni advising. “I’m not hearing of people dropping out completely—it’s not like they’re suddenly discovering they have a trust fund.” But, she adds, “they are seeking more meaning in their work.” Some alumni, she adds, are taking much-needed breaks in their careers and asking, “how big a gap can I have on my resume?”

Keeping the Big Law option open while striving for more “meaning” seems to be a running theme at the moment. “They’re not leaving but they’re more insistent about what they want,” says Irene Dorzback, the head of career counseling at NYU School of Law. “They are staying in law but looking for different ways to do their job,” alluding to the importance of remote work for young associates.

And what else are associates seeking as they move from one firm to another? Because of the extraordinary demand for talent, associates are in the driver’s seat, says Summer Eberhard, a recruiter with Major Lindsey & Africa. “They don’t have to accept their current role because there’s an abundance of opportunities. They want jobs that check all the boxes—less hours, more mental health support, more diversity and remote work.”

All of this leads to my next question: for the associates who are shuffling around, are they getting those boxes checked?

“They’re leaving but not happier,” says the recruiting manager of a major firm. “I’ve also seen also a boomerang effect in which associates who’ve left are returning to their old firms. Some firms are actually paying to get them back.” But the temptation to go to another firm is irresistible, says this manager: “They’re thinking, oh, I’m not that happy here but if firms are giving these crazy bonuses, I’ll go for that extra $100k and get two weeks off between jobs.”

Lateral associates might not be happier but they’re definitely richer. And maybe that’s good enough.

Yet, lawyers seem to talk out of both sides of their mouths about what they want. “When associates move, it’s not for money because they’re willing to make less for fewer hours or better long term prospects,” says recruiter Fivel. “[B]ut everybody asks about sign-on bonuses. Associates think if I’m working 2,400 hours anyway, I’ll go where they pay the most.” Another recruiter, Dan Hatch, puts it more succinctly: “Money is a good deodorant for other problems.”

Associates don’t seem to disagree. “I think people are really burned out, and firms are not making any effort to address it whatsoever,” says a third-year associate at a New York Big Law firm. “But despite the stress and unhappiness, I don’t see a great resignation. We all sacrificed a lot already to get where we are.” He adds, however, some of his friends are just holding on for bonuses at the end of the year: “Perhaps in January we’ll see a good amount of departures.”

Somehow, I wouldn’t hold my breath for a January surprise.