Welcome back to the Big Law Business column on the changing legal marketplace written by me, Roy Strom. Today, we look at how a boom-turned-bust in restructurings is impacting Big Law. Sign up to receive this column in your inbox on Thursday mornings.

Big Law bankruptcy practices just finished one of their worst years in decades.

Through January, there hadn’t been a major public-company bankruptcy in more than three months, according to the UCLA-LoPucki Bankruptcy Research Database. That’s remarkable, as companies in 2020 averaged more than one filing a week.

The last year there were so few filings was 1987.

I wrote a year ago about the large number of winners in 2020 coming out of a Covid-induced bankruptcy boom. Kirkland & Ellis earned more than $200 million in legal fees billed during the run-up to more than 20 major restructurings it worked on in 2020.

But last year, Kirkland earned about a tenth of those fees on two such cases. Other major firms, including Latham & Watkins and Weil Gotshal, saw similar booms and busts. Those firms declined to comment.

Bankruptcy practices were the lone drag on demand for lawyers’ time in 2021, according to Thomson Reuters data, which showed a near 8% plunge in hours billed from 2020. The group was down 5.4% from a more normal 2019. 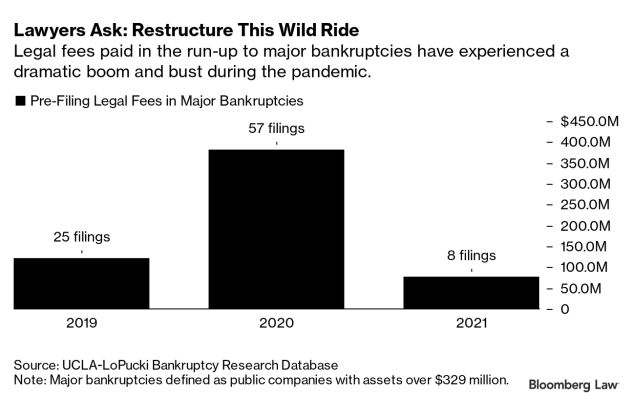 I wrote in October about the glut of filings turning to a trickle. I said at the time that how firms treated bankruptcy practitioners during a downturn could foretell how they respond when (if!?) merger and acquisition levels moderate from their current torrid pace.

The slowdown is putting an uneven level of stress on law firm leaders, Kent Zimmermann, a consultant for firms at the Zeughauser Group, told me.

Firms with major bankruptcy practices know the work has a feast-or-famine streak and are happy to maintain their restructuring groups as a counter-cyclical hedge, he said. Many of those firms are fine with their current product mix: Dealwork work is their profit engine, and it’s roaring right now.

But most firms do not have market-leading restructuring groups. They are the ones Zimmermann sees struggling the most during a downturn—in part because the practice is never a big winner. They don’t cash in as much during the bankruptcy booms.

“It’s as if they wait for years to go swimming and when they do, they are often relegated to the shallow end,” he said. “That is frustrating for some firms and makes them wonder what they should do with the practice.”

It’s hard to know when the market will turn for restructuring groups.

The slowdown has lasted longer than some restructuring experts predicted. Kirkland’s bankruptcy group founder, James Sprayregen, expected a wave of filings in the latter half of last year, he told Bloomberg in late 2020. It never came.

Around this time last year, I said there was no slowdown in sight, pointing to record debt levels owed by so-called “zombie” companies who aren’t bringing in enough cash to service interest payments. The zombies spent last year healing. Bloomberg reported in December that the number of such companies in the Russell 3000 Index had fallen 13% from the start of the year.

It’s hard to know what will cause bankruptcy filings to come back to life, or when that will happen. So, I’ll make no predictions this year.

On Cadwalader: Cadwalader saw a stunning 72% surge in profits per equity partner last year, and the firm’s chair, Pat Quinn, told Meghan Tribe he will focus on advising the types of clients that led to that success rather than seeking “world domination” as he sees some other firms doing.

On Big Law Expansion: Big Law firms have ventured beyond the biggest cities into places like Austin, Texas and Salt Lake City. The trend could soon see Big Law offices pop up in places like Fresno, California or Greenville, South Carolina, Andrew Maloney reports at The American Lawyer.