Welcome back to the Big Law Business column on the changing legal marketplace written by me, Roy Strom. This week, we look at a major law firm’s recent offering of a more flexible job for lawyers and what it says about the tight market for laterals. Sign up to receive this column in your inbox most Thursday mornings.

I remain interested in what is causing the tight market for Big Law associates.

There are two common explanations, both of which could be true at the same time.

One is: Big Law firms are experiencing a surge of demand they didn’t anticipate.

The other is: Big Law is experiencing mass attrition because junior lawyers don’t like the job anymore.

I’ve said before these problems should elicit different responses. The first scenario could be solved by hiring more associates or taking on less work. The good news about this problem is that law firms have been doing both things, and the problem is probably transitory—to use the parlance of our times.

But the second scenario—if it’s happening—presents a more difficult problem that law firms have done little to address. I wrote in July: “If the problem is the job is so bad that people are walking away en masse, then the next marginal raise might be throwing good money after bad. The job might need to change.”

This week, Allen & Overy offered a new type of job for lawyers in the U.S.

The U.K.-founded firm expanded its “flexible resourcing platform” to New York. It intends to hire lawyers from junior associates to partners to support Allen & Overy’s U.S. clients on domestic and international matters.

The platform, called Peerpoint, launched in 2013 and now has about 350 lawyers across Europe, the Middle East and Asia. The firm won’t say how many lawyers it is looking to hire in the U.S.

The lawyers will work on similar types of high-end legal projects that clients turn to Allen & Overy for, Amie Davidson, who runs the U.S Peerpoint operation, said in an interview. They will work on a project basis and be compensated “comparably” for their time. Davidson said the group is not trying to be a low-cost provider of lawyers but to provide “high-quality skillsets” for discrete projects.

The firm’s leaders believe the pandemic and the ensuing surge in work at Big Law firms has drawn lawyers to flexible work environments.

“A lot of people are asking: ‘Is this the path I want to continue on? Is there more I want to be doing with my life?’” Davidson said. “For those lawyers who step back and ask if they want to follow the traditional Big Law path or stay in their current in-house role, this is an opportunity to do something different.”

Across the country, people are quitting their jobs at all-time levels, according to the Bureau of Labor Statistics.

That’s true for a broad category of employees that includes lawyers and other business professionals, which has seen more than 700,000 people quit their jobs in two of the past five months, BLS data show. That threshold had never been breached in a data set that runs to 2001.

But the quitting is not terribly out of line from pre-pandemic levels. And far fewer lawyers and business professionals quit their jobs in 2020, which could explain some of the elevated levels since. 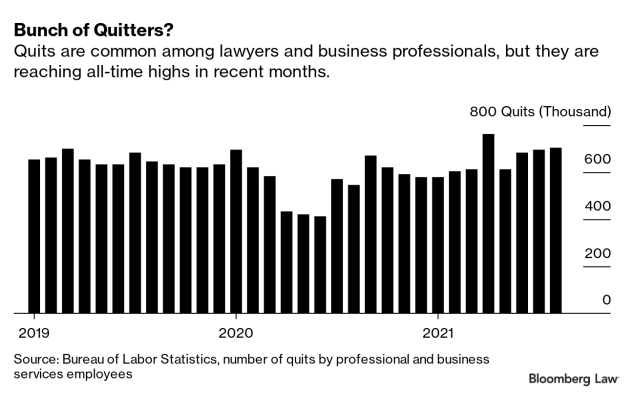 Kate Reder Sheikh, a managing director at legal recruiter Major, Lindsey & Africa, said more associates than average are choosing to leave their firms. She placed more lawyers at boutique firms or in non-traditional firms over the past 18 months than in the rest of her seven-plus years of recruiting combined, she said.

“Law firms are seeing attrition at a higher rate than we’ve seen in the past to more non-traditional career paths,” Sheikh said. “These alternative structures that are popping up are not necessarily in response to what associates say they want as much as in response to attrition.”

Axiom Law, which provides a flexible lawyering service similar to Peerpoint, has hired more lawyers this year, 900, than ever before, said Sara Morgan, head of legal talent for the company. The company has a record number of lawyers actively working on engagements, she said.

But it has also seen some of its lawyers leave for Big Law—something that had not happened in meaningful numbers before, Morgan said. She noted some quickly return and attributed some of the moves to Big Law’s recent pay increases.

“There are those who’ve said the pandemic has made me rethink my life and there are just more important things to me than money,” Morgan said. “On the other spectrum is people who think life is so short, why don’t I make as much money as I possibly can and then leave or retire?”

The narrative that Big Law is facing a crisis of apathy has taken hold in some corners. Read this thread for too long and you might quit your job, too.

A lot of people have made big life changes during the pandemic, and employers are seeing a realignment from that. Turnover is difficult for managers, especially during a period of intense workloads. But I’m not convinced it rises to an existential threat for law firms, which could still do more to cater to junior lawyers’ tastes.

The professor who coined the term “The Great Resignation” in May also predicted then that employers would eventually see high numbers of “boomerang” employees—those who return to their old gigs after short-lived pandemic epiphanies.

I continue to be interested in finding more data on what is one of the most consequential ongoing debates in the industry. One data point will be how many lawyers join Peerpoint and services like it.

On 401(k)s and Legal Fees: My colleague Jacklyn Wille reports the spike in lawsuits alleging excessive 401(k) fees has upended the insurance market. Deductibles for legal fees have risen to $10 million or more in some cases, Wille reports. That adds up to a lot of money when experts also tell Wille that exposure to these lawsuits is “metastasizing.”

On The Las Vegas Raiders: Brian Baxter reports the NFL franchise announced a new general counsel the same week head coach Jon Gruden departed following the disclosure of racist, misogynistic, and homophobic emails sent by Gruden within the past decade.

On a Big Law Chair’s Future: Ruiqi Chen reports Paul Hastings chairman, Seth Zachary, sees a future in the public sector working on tax policy and voting rights after he leaves the firm in 2024. Zachary will step down from his leadership post in a year.