Law firms that poached attorneys from rivals at record levels in the past two years confront a challenge in preventing the high-priced talent from bolting again.

The 350 largest law firms, trying to keep up with a surge in legal demand, made more than 10,000 lateral hires in the first six months of 2022 and 2021—double the pace of five years ago, Decipher Investigative Intelligence data shows. Historically, about half of lateral hires move again within five years, according to the research firm.

“One of the risks of growth primarily by lateral acquisition is that money is the only glue,” said Tom Sharbaugh, a Penn State Law professor and former Morgan Lewis managing partner. “If people come for money, they’ll leave for money.”

Legal operations have long focused on retention, as the days of firms hiring lawyers out of school and keeping them until retirement vanished decades ago. But the red-hot lateral market has intensified the challenge of keeping all-star partners and associates on the payroll and ensuring bigger recruiting bets pay off.

“The sheer volume of lateral hires means that lateral failures can snowball quickly,” said Michael Ellenhorn, chief executive officer of Decipher. “Bad hires could lead a firm to bank on millions and millions in expected revenue with top-of-market payouts that simply won’t materialize.” 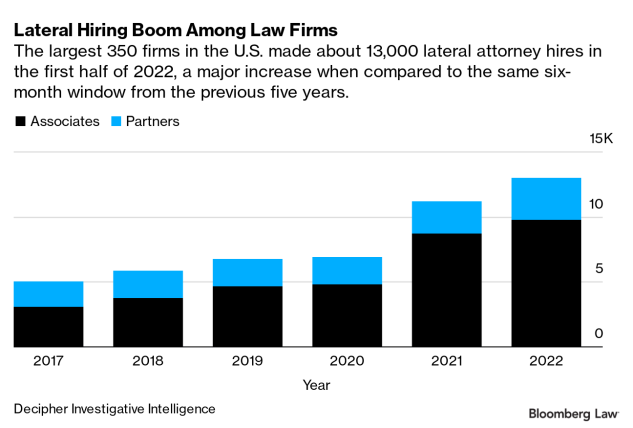 Firm actions show how competitive the tug-of-war for talent has become, with some poachers offering more than $10 million a year to court certain rainmakers.

Greenberg Traurig has added 200 shareholders and counsel since 2021, according to the firm.

“We’ve maintained a fiscally responsible firm,” Greenberg Traurig executive chairman Richard Rosenbaum said. “We have not done anything kind of crazy to get people to come, which you see happening at some places.”

Gordon Rees, an AmLaw100 firm located in all 50 states, has been among the most active in lateral hiring, bringing on 425 lateral attorneys, including nearly 60 partners, since 2021, according to Leopard Solutions.

Money is a “magnet” in recruiting but it can’t be the glue, said Gordon Rees chair Dion Cominos. Money “needs to be backed up with shared purpose and culture, and it’s incumbent on firm leadership to instill that in laterals,” he said.

The firm has tried to give its attorneys autonomy—it has avoided making any mandatory return-to-work policies, Cominos said.

Sheppard Mullin is among the more than 20 law firms that have made 200-plus lateral hires since 2021, including partners, associates and counsel, according to Leopard Solutions. The firms have experienced varying levels of turnover.

“It has been a frenzy of competition over the last couple of years,” Sheppard Mullin chair Luca Salvi said. “We’re trying to minimize dislocation. It’s not just about money. It’s making sure people are connected and invested in the firm.”

VIDEO: Steven Davis and the Rise and Fall of Dewey & LeBoeuf

Some firms that sharply ramped up investments in lateral hiring and associate salaries during the legal work boom could be at risk if the economy dampens, said Bruce MacEwen, a law firm management consultant at Adam Smith, Esq.

Global values of merger and acquisitions fell 17% in the first six months of the year compared with the same period of 2021.

“Here’s a news flash: M&A is cyclical,” MacEwen said. “Something that looks supportable in a bull market all of a sudden may not make a lot of economic sense in a down market.”

The now-defunct Dewey & LeBoeuf was once the epitome of a growth-by-lateral hiring strategy, as the firm aggressively recruited top-rate attorneys, luring them with lavish compensation guarantees.

Firms today do a better job of integrating lateral attorneys and promoting cohesive cultures, said David Wilkins, faculty director of the Center on the Legal Profession at Harvard Law School.

Still, the changing environment in Big Law is something that can’t be brushed aside, he said, especially for the firms that cannot regularly match salaries and payouts of the industry’s titans.

“Law firms have traditionally depended upon partners developing bonds over long periods of time,” Wilkins said. “In a world where fewer and fewer lawyers actually follow this traditional path, firms will have to find new ways to create thick cultures.”