Companies have hit the brakes on going public this year, ending a lucrative stretch for law firms handling those deals and halting a talent war for attorneys with IPO expertise.

Money raised by US initial public offerings in the first half of the year fell to $14.6 billion, down more than 90% from the $167 billion during the same time last year, data compiled by Bloomberg show. The latest six-month total is the lowest since 2016.

The downturn is the culmination of the largest swing in recent memory for a segment of the legal business that’s prone to boom-and-bust cycles. The dramatic swing is in large part driven by the end of skyrocketing demand by special purpose acquisition companies, or SPACs, which raised more than $100 billion in the first half of last year alone.

“We’ve been here before and we’ll be here again,” said Craig Marcus, co-chair of Ropes & Gray’s capital markets practice. “It’s the end of the cycle.”

Lawyers pointed to a bear market that’s crushed valuations and spooked buyers and sellers of newly listed shares alike. The S&P 500 is coming off of its worst first-half performance since 1970, and the US Federal Reserve is raising interest rates to tame inflation, flushing out hype built during easy money policies brought on by the pandemic.

Big firms with large capital markets groups aren’t laying off lawyers, but most have slowed or stopped hiring. That’s a sharp turn after a two-year stretch in which many scrambled to recruit and retain talent as the market boomed.

“We’re in the re-pricing of assets stage right now, and we all know the business is cyclical and it’s going to come back,” said David Goldschmidt, global head of Skadden’s capital markets group. “The million dollar question is when and what will prompt it to come back?” 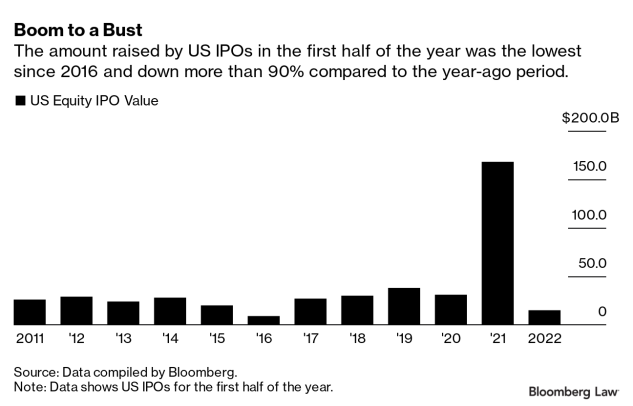 Hiring in capital markets practices by the top 50 law firms is down a quarter to a third from a year ago, according to data from Firm Prospects, a law firm and attorney analytics company. Those firms hired 34 partners and 117 associates in capital markets practices during the first half, Firm Prospects said. That compares to 45 partners and 176 associates hired during the same period last year.

While the slowdown is likely to hit firms’ bottom lines, a possible silver lining is it allowed lawyers to return to a more sustainable level of work. The boom-time’s long hours drove fears of burnout for some associates, even as they were showered with bonuses and pay raises to keep working long hours.

“People aren’t just sitting at home working like they were the last two summers, they’re a little more out and about this summer,” said Mitch Nussbaum, vice chair of Loeb & Loeb and co-chair of the firm’s capital markets and corporate department.

Globally, no firm advised issuers on more than 30 IPOs through the first half. Ten firms had crossed that threshold at this time last year, data compiled by Bloomberg show.

Only three firms helped US issuers raise a total of more than $1 billion through the first half: Maples & Calder, Weil Gotshal & Manges, and Davis Polk & Wardwell, according to the Bloomberg data. Maples & Calder specializes as local Cayman Islands counsel for SPAC IPOs. 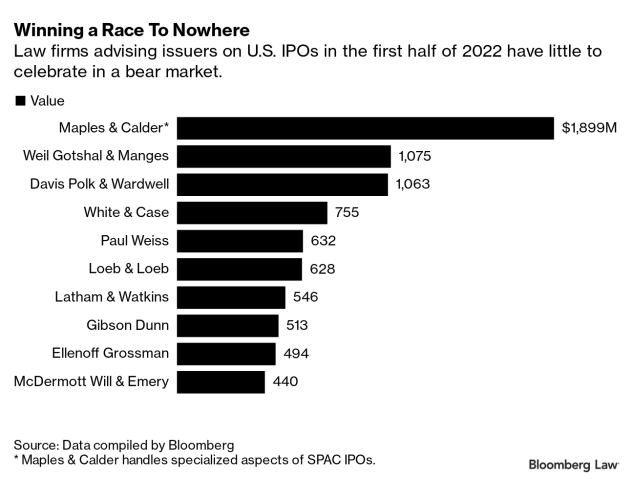 The washout won’t impact the long-term strategy at Latham’s capital markets practice, said the leader of that group, Ian Schuman. The firm is still looking to “selectively” hire lawyers and the group is busy with the day-to-day management of public company work. The group added 100 public company clients last year, Schuman said.

“It’s a long-term strategy, and the markets will open back up. When they do, it’ll be a mad rush and we’ll need everybody to handle the work,” Schuman said. He added that many companies are waiting to access public markets once volatility calms.

Skadden’s Goldschmidt said the firm is being “judicious” about any lateral hiring.

The three busiest firms in the US underwriters’ market were Ellenoff Grossman, Ropes & Gray, and Davis Polk. All three advised on deals worth nearly $2 billion or more. Ellenoff Grossman specializes in the SPAC market. 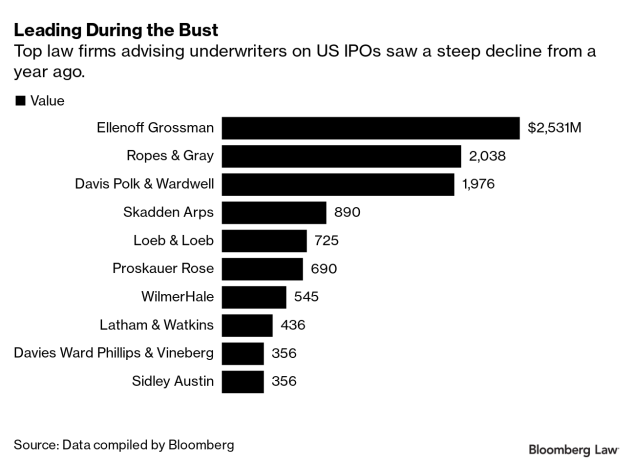 “In the capital markets practice, for people who do the work I do, it’s definitely not like last year,” said Michael Kaplan, head of Davis Polk’s corporate department. “July 4 was a relatively quiet holiday weekend.”

The SPAC market has also been roiled by proposed rules from the US Securities and Exchange Commission. Lawyers say the rules, which would add liability for underwriters, would add to the cost of taking companies public through blank check mergers. The SEC’s proposal has caused some major banks, including Bank of America, Goldman Sachs, and Citigroup, to pause their activity with SPACs.

For lawyers who are now taking vacations, occasionally commuting to the office, and not working overnight and throughout weekends, the SPAC bust adds to the list of reasons why this year is so different from last.

“There’s no question we were in a frenzy during the end of 2020 and the early part of 2021, which was really unsustainable,” said Joel Rubinstein, a partner in White & Case’s capital markets group. “But people are not panicking right now.”