Law firms are planting flags near hedge funds, banks, and wealth managers they followed to Miami, showing real estate for lawyers hinges on where current and future clients are.

Sidley Austin and Winston & Strawn secured space in the 55-story office tower, 830 Brickell, being built in the financial district in Miami’s urban core. CI Financial Corp. and Thoma Bravo also chose the building. Apollo Global Management, Point72 Asset Management, and Moore Capital Management will be a few blocks away. All the financial firms moved to the city since the start of 2020.

King & Spalding chose a downtown Miami high rise this year for its new office in the city, joining area veterans K&L Gates and DLA Piper near the federal district courts. Blackstone Inc. is also downtown, a few blocks away.

Kirkland & Ellis, which announced in May it is opening a Miami office, declined to comment on the location it’s choosing.

“When it comes to law firms, many of them are following where their client bases are,” said Barbara Black, managing director of JLL real estate. “Brickell’s been getting the most of the law firm attention because it has the new product, 830 Brickell, a trophy building that has all the bells and whistles and many clients.” 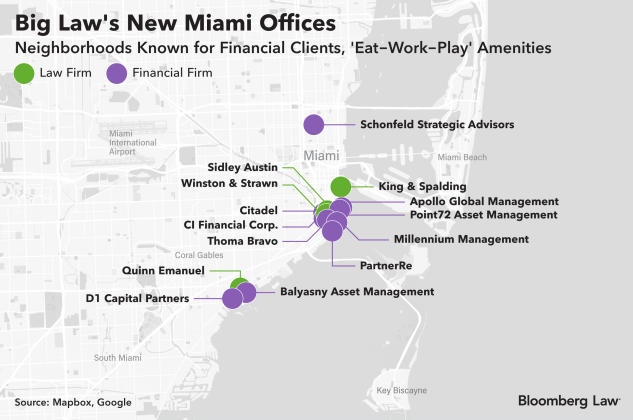 Financial firms have been surging into Miami, taking advantage of lower taxes and warm weather that is friendly to workers.

Andreessen Horowitz, Blackstone, Ken Griffin’s Citadel, Dan Sundheim’s D1 Capital Partners and Josh Harris’s HRS Management, all in the Miami area, are among financial firms that have increased their presence in the state.

The moves have heated up a real estate market with limited Class A office supply and finite land, said Ryan Holtzman, a Cushman & Wakefield broker for office towers across Miami. Firms looking for proximity to business, mass transit, and eat-work-play amenities will have to “move at warp speed,” he said.

New office tenants in Miami’s greater downtown area represented over 45% of leasing activity in 2021 compared with 15% in 2019, according to the Miami Downtown Development Authority. Lease rates for Class A space jumped nearly 17% in 2021, with Brickell seeing the largest rate growth of 23%, according to the authority.

Office rents are up nearly 11% this year in the second quarter compared with a year earlier, Bloomberg News reported in July, citing Jones Lang LaSalle Inc.

Miami had long been a bridge to Latin America for banks and Big Law, but the pandemic-era capital influx gave lawyers an additional reason to focus on the area, said Enrique Martin, Winston & Strawn’s managing partner in the city.

“That migration of capital has certainly caught the attention of several international law firms that didn’t really view Miami as anything other than a gateway city,” said Martin, a native of the area. “The expectation is that the deal work disputes from the movement of that capital, and the management of investments from South Florida, should result in additional legal work.”

The city’s Brickell area, which some locals call the ‘Wall Street of the South,’ saw more than 53% of Miami’s total commercial leasing activity in 2021, according to a report by HR&A Advisors Inc.

By grabbing space at 830 Brickell, Sidley Austin and Winston & Strawn chose a tower at the center of the neighborhood’s growth. The building, with its white-marble floor and black-slat-paneled walls in the lobby, will include a rooftop bar and restaurant, fitness center, and more than a million feet of “uninterrupted glass,” according to the developers.

“We have some clients in our building, as well as in walking distance, which was important to us,” said Yvette Ostolaza, Sidley Austin firm chair, of the firm’s 60,000-square-foot lease in the building.

Just steps from the tower, luxury condos, walkable streets, and upmarket restaurants line Brickell Avenue. The neighborhood has grown in the last two decades into a haven for young professionals and families.

“It just had that perfect triangle of different things—from housing, to commuting, to our clients,” Ostolaza said.

Others seeking a quintessential, laid-back Miami vibe with proximity to the major finance and government hubs choose Coconut Grove, which boasts prestigious private schools and near-the-ocean leisure, or Wynwood, known for its public art and eclectic bar trappings.

Spacious Class A office space is hard to come by in Miami, however. It presented some challenges for law firms looking for newly built, high quality space to accommodate continued growth.

“The backdrop you start with is Miami being in short supply of new buildings,” Winston & Strawn’s Martin said. “You’re starting with limited choices.”

The demand has created a hyper-competitive, highly secretive market, with some brokers and industry advisers under stringent non-disclosure agreements. Several brokers said a few law firm office transactions are still in the works.

“I wish I could share more, but that’d be career ending,” said Shay Pope, a CBRE senior vice president and broker.

CBRE’s Pope said big-name developers are watching the demand and planning office towers to meet it.

Related Cos. of Manhattan’s Hudson Yards fame is behind one of the tallest office towers to come in Brickell. Helm Equities is also developing its first Miami office building and flaunting expansive outdoor space.

It’ll take a year or more for such developments to start construction, and longer still to open.

“We have a finite amount of land for development, and that’s why we haven’t seen that crazy urban sprawl that we’ve seen in other major markets,” Cushman & Wakefield’s Holtzman said. “It’s scarce, but if you want it, you better take it right away.”