Law firms that use a Swiss structure to market operations risk having to bolster conflicts checks or face possible lawsuit damage awards in the tens of millions of dollars.

At least six major U.S. firms affiliate with other law operations under the Swiss verein model to market services globally as if they were a single entity. A pending appeals court decision of a $32.3 million award against Dentons tests whether firms using the structure must do conflicts checks with all affiliate members before taking on a client.

“I’m sure there’s a high level of distress over what happened in this case,” said law firm consultant Peter Zeughauser, noting that conflicts checks can be expensive and time consuming. “Firms worry a lot about their reputations for trustworthiness and integrity—and because of that, they worry about conflicts.”

The structure, first used by sports clubs and non-profits, and then accounting firms, lets multiple operations affiliate to market under one brand while limiting liability between offices and keeping separation on matters such as profits, pay and taxes.

Swiss verien firms risk losing business if they’re required to disclose conflicts related to affiliates’ work. Existing clients may balk at other representations. Potential clients could decide to go elsewhere when they learn who else the firm is representing.

Conflict checks that turn up nothing can still take time and limit the ability of partners to bill clients on new matters until the checks are done, said Zeughauser, whose group has worked for Dentons, Baker McKenzie and other Swiss verein firms.

“To partners, conflict check lags can become a significant annoyance,” he said.

The matter before the appeals court began when RevoLaze Inc., a Clearlake, Ohio-based company that develops laser technology for denim, enlisted Dentons in the U.S. to represent the company in 2015 in a patent case.

RevoLaze later alleged that Dentons shouldn’t have taken the case because of a conflict. The U.S. firm’s verein affiliate in Canada represented Gap Inc., which RevoLaze sued for patent infringement. The company accused Dentons in the U.S. of malpractice.

Dentons responded that the Canada and U.S. firms were completely separate. It also argued that the U.S. firm had disclosed the affiliation to RevoLaze.

An Ohio state court judge sided with the company, and a Cuyahoga County jury awarded RevoLaze $32.3 million in February 2020. 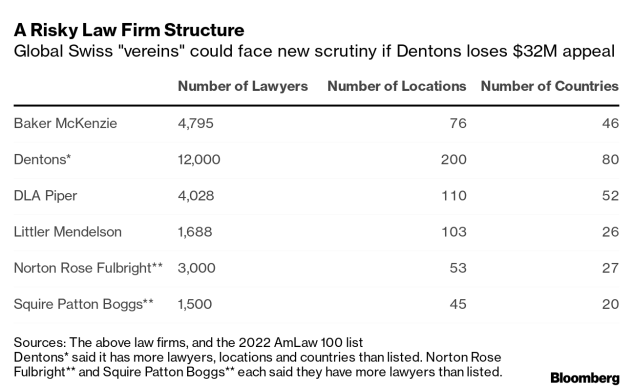 Dentons appealed. The appeals court decision is likely coming soon because oral arguments were held more than a year ago.

The jury’s award is the largest legal malpractice judgment in Ohio history, according to Patterson Law Firm, which brought the case for RevoLaze. “We’re feeling pretty confident” regarding the company’s chances on appeal, Patterson member Kristi Browne said.

Squire Patton Boggs, one of the firms that operates as a Swiss verein, said through a spokesman that the Dentons decision has no bearing on it.

“We have always employed a conflicts check system using a ‘one-firm’ approach, meaning conflicts checks are run through one global conflicts checking system that adapts to the most stringent conflicts and ethics laws,” said the spokesman, Angelo Kakolyris, in a statement.

The RevoLaze case originated at the U.S. International Trade Commission, where an administrative law judge disqualified Dentons from representing the company. The judge rejected Dentons’ contention that its U.S. operation was separate from its Canadian affiliate.

Dentons noted at the time of the jury award that the ITC later overturned the administrative law judge’s decision.

A key question in the appeal is whether Swiss verein firms should be treated more like a single entity for the purpose of conflicts checks rather than a group of separate law firms that affiliate for marketing.

“Clients should be concerned because everybody’s entitled to loyalty and confidentiality,” said legal ethics consultant Jan Jacobowitz. “There needs to be transparency.”

Jim Jones, senior fellow at Georgetown Law’s Center on Ethics and the Legal Profession, said the case could prove to be a cautionary tale for Swiss verein firms’ ability and willingness to fully disclose potential conflicts to clients, especially given that from country to country, “conflicts rules are all over the place.”

“I’ve always been extremely dubious that Swiss vereins could protect you against ethical obligations,” Jones said.

Even if Dentons loses its appeal, firms will likely adapt to the new regime on conflicts checks, Zeughauser said. Firms that have inefficient conflicts checks will need to improve their systems so that the examinations don’t slow the flow of business, he said.

RevoLaze argues in its appeals brief that Dentons has abandoned its main contention that no conflict existed because Gap and RevoLaze were represented by different firms.

“After losing the issue at trial, Dentons no longer disputes that the verein is one firm,” the company’s lawyers claim in their filing.

But Dentons makes a range of other arguments, including that RevoLaze failed to present legally sufficient evidence of damages.

The firm also argues that the company didn’t prove Dentons breached a duty of care, given that no attorney had ever been disqualified from ITC proceedings in “remotely similar” circumstances.

At a panel discussion in 2016, Dentons general counsel Edward Reich made comments about Swiss vereins and conflicts checks. He said that from the beginning of a firm’s relationship with clients, the clients should have a clear understanding of what the verein structure means through “robust” engagement agreements.

While the firm runs conflict checks firm-wide, “that doesn’t mean we’ll apply the most restrictive rule in any given situation” because that’s not always required or even desired by the client, Reich said at the time.

“Clients retaining us in the U.K. don’t want to hear that we can’t undertake their matter because some rule in New York doesn’t allow it,” he said then.