Welcome back to the Big Law Business column on the changing legal marketplace written by me, Roy Strom. Today, we look at how Big Law and “distributed law” has converged over the past year, and what that means going forward. Sign up to receive this column in your Inbox on Thursday mornings.

James Fisher and Kevin Broyles left their law firms in 2002 to launch a competitor of their own with a couple new twists. First, there wouldn’t be offices. Second, individual lawyers would keep up to 80% of the revenue they generate.

At least a few years ago, Fisher started predicting that his firm FisherBroyles would reach a status held by the places where he used to work (Holland & Knight, Morris Manning & Martin, and Baker McKenzie): Ranked as one of the 200 largest in the country by revenue.

This week, Fisher’s prediction came true. FisherBroyles cracked the AmLaw 200 with $105 million in revenue in 2020 after hiring 51 partners, almost all from top firms, over the last 12 months. The firm’s revenue grew 14% last year, and Broyles said the firm is on pace to grow its top line 20% this year. 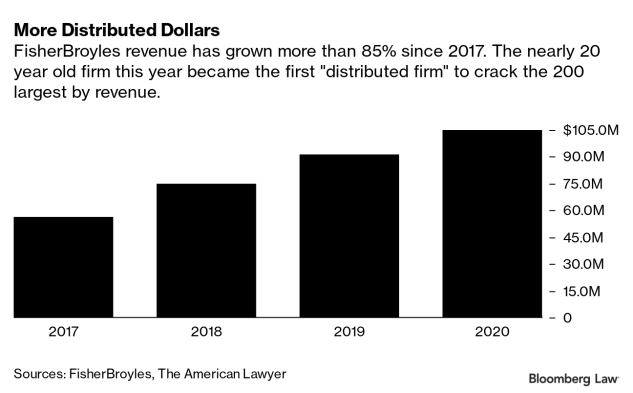 The non-traditional firm cracked the list in a year when Big Law firms have never looked more like the cohort of “virtual” or “distributed” firms. Partners have been working from home for more than a year and they’re taking home a bigger chunk of revenue after management shaved costs during the pandemic.

The question I have is: In the longer-term competition between Big Law and remote law, who benefits more from the convergence?

For their part, Fisher and Broyles said their pitch to Big Law partners has been streamlined during the pandemic. They no longer spend time convincing partners they can work from home. They said some Big Law partners looked longingly at the FisherBroyles economic model, which pays partners based on their billings twice a month,when many firms briefly stalled distributions.

It’s hard to compare profits per partner at AmLaw firms to what a partner would make at FisherBroyles. AmLaw’s profits per equity partner figures are simply the firm’s total profit distributions divided by the number of equity partners.

While that’s not all that instructive when trying to determine how much an individual partner makes at any firm, it’s even less helpful when applied to FisherBroyles, where AmLaw says profits per equity partner are $359,000—good for second-to-last among the 200 largest firms.

AmLaw considers all of FisherBroyles’ partners the “equity” kind, even though they don’t pay capital into the firm and they don’t necessarily receive any of the firm’s “profits.” They receive up to 80% of the revenue they generate, and if they recruit a partner to join, they earn 2% of that partner’s revenue in perpetuity.

Cracking the AmLaw 200, Broyles said, is “the culmination of 12 months of a crescendo of credibility for the distributed model. That credibility will lead to even faster growth for our firm.”

FisherBroyles handles a full range of legal services for clients. Michael Pierson, managing partner of the firm’s global corporate practice, said the work has become more sophisticated in the past year as clients have followed lawyers joining from major firms like Crowell & Moring, DLA Piper, Winston & Strawn, and Sullivan & Cromwell.

I’ve spoken to partners at Big Law firms who started taking virtual firms more seriously after spending months working from home. The office is a physical reminder of the benefits of being connected to a Big Law brand. You dress up for it. You drive into a big city. You see colleagues and clients who do interesting things. Those emotional connections have gone missing over most of the last year.

On the other hand, some Big Law partners might like the more casual environment firms are encouraging. If you liked bunkering down in your office without interruptions from family back home or colleagues in the office next door, Big Law’s half-filled spaces could be a sanctuary.

But there’s still the dollars and cents of it. Big Law partners returning to half-filled offices could resent paying for all that empty space. They might return to a thinned-out support staff, as well. At that point, returning to a home office and keeping a bigger share of the revenue they generate might sound like a bargain.

Even if firms have cut costs, it’s hard to compete with the overhead savings virtual firms accomplish without leases, staff, and associates. That’s just one of the arguments.

“There is no way you can ignore the headwinds of real estate and exorbitant associate salaries when it comes to overhead,” Fisher said. “A lot of partners aren’t seeing those profits per partner trickle down the same way they would at FisherBroyles.”

I wrote in 2017 that remote firms were “a growing threat” to Big Law. The threat only seems to have grown.

On Associate Competition: Big Law firms are venturing into new cities to snap up talent to relieve overworked associates in corporate practices, and that’s causing problems for regional firms in those cities, Meghan Tribe reports.

On Office Re-Openings: Goodwin Procter and White & Case became two of the latest firms to target mid-September for bringing more lawyers back into the office. Like most Big Law firms at this point, they are stressing flexibility and don’t expect lawyers to return to the office five days a week.

On New Office Openings: Cooley officially launched its Chicago office, which I wrote last month was imminent. The firm snagged partners from Winston & Strawn, DLA Piper, and Latham & Watkins. It amounts to a bet on the Windy City’s tech and start-up scene.

On Regulatory Sandboxes: Rocket Lawyer is seeking to become an alternative business structure under an Arizona Supreme Court program that will allow companies owned by non-lawyer to provide some legal services, Sam Skolnik reports.

On Bradley Gayton: The Coca-Cola Company’s former general counsel joined the board of directors at tax software company Vertex Inc., Ruiqi Chen writes. He joins the board of the company that partners with companies like Deloitte and Oracle to provide tax compliance software and services just weeks after he abruptly left the soda maker’s top legal post.