Companies like Deloitte may be able to compete more directly with law firms as states tinker with legal services rules.
Benjamin Girette/Bloomberg

The Big Four accounting companies are not likely to try to directly compete with law firms in Arizona and Utah until other states follow their lead in loosening restrictions on legal service providers, according to a top voice in industry innovation.

“They are creatures of scale, not one-offs,” Don Bivens, chair of the American Bar Association’s Center for Innovation, and a former member of an Arizona task force that recommended rule changes in the state, said of Deloitte, EY, KPMG, and PwC.

Bivens told Bloomberg Law that he has discussed with Deloitte executive Bob Taylor regulatory changes that can clear a path for companies to provide legal services. In a May 5 email from Bivens to Taylor, Bivens said the pair discussed him meeting with a group of Deloitte employees to talk about “new developments” in Arizona and similar moves in some 12 other states that are “also looking to review their traditional ethics rules.”

That meeting hasn’t happened, Bivens said. He said Deloitte and other Big Four companies are more likely to look to enter the market only if many other states follow Arizona or, like Utah, experiment with a “regulatory sandbox.”

Bloomberg Law obtained the email through a public records request.

Legal industry deregulation efforts in Arizona, Utah, and California long have been seen as potentially giving the Big Four the means to compete head on with the country’s largest law firms, something existing state rules have prevented.

The Big Four “is well established, growing, and challenging the bar to compete for the attention and business of corporate clients already,” said Susan Hackett, CEO of the consultancy Legal Executive Leadership.

Arizona has gone the farthest in its legal industry deregulation efforts, last year agreeing to scrap its ethics Rule 5.4—which had prohibited law firms from forming partnerships with nonlawyers, or sharing fees with them.

Bivens said he initiated the conversation with Taylor, who also volunteers with the ABA’s innovation center. He said their initial Zoom call mostly pertained to a new data initiative both are involved in to develop standard metrics to measure the impact of changes to legal services regulation changes.

Taylor, who joined Deloitte in March after 25 years as an in-house lawyer at Liberty Mutual, declined comment. He hasn’t yet responded to Bivens’ May 5 email, Bivens said.

During a podcast appearance in April, Taylor said he doesn’t currently see Deloitte in direct competition with law firms “in the sense that we are not providing legal advice.”

While Taylor didn’t discuss the effects of state regulatory reforms, he did say he’d like to see law firms “lean in” to the notion of coordinating more legal services work for corporate clients with Deloitte. “I think together, the sum of legal business services from Deloitte and law firms can really create some superior value for our clients,” he said. 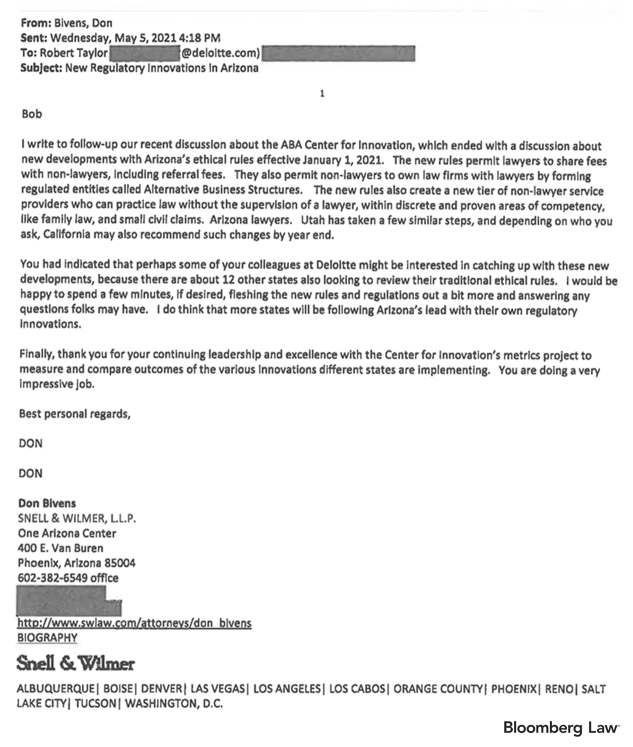 The Utah sandbox is a seven-year pilot program that allows new types of legal services operations, including those owned by non-layers, to gauge benefits to consumers. California bar officials are currently weighing whether to initiate a similar operation, which would make the Golden State the largest legal services market in the U.S. to loosen regulations.

Utah, Arizona, and California have been joined by a number of big states in recent months—including New York, Florida, Illinois, and North Carolina—that also are considering legal system rules changes that ultimately could give companies, including the Big Four, new ways to compete with Big Law firms.

The Big Four haven’t waited for reforms to strengthen their ties in the U.S. legal market. Deloitte and KPMG, for example, have cemented alliances with workplace-focused law firms Epstein Becker Green and Ogletree Deakins, respectively.

At the same time, EY and Deloitte last year announced new efforts to increase their legal services team revenues in the U.S., including through sales of automation tools and other legal tech streamlining services to corporate counsel offices.

VIDEO: The Big Four accounting firms employ enough lawyers to rank among the largest law firms by headcount. As Bloomberg Law’s Sam Skolnik explains in this video, for law firms “there’s real reason to be concerned about the rise of the Big Four in the legal space.”