Among the many traditions of official Washington restored in President Joe Biden’s White House is its age-old reputation as a magnet for lawyers.

More than half of ‘s senior staff of more than 50 have law degrees, even though most are in roles without a legal focus, according to a Bloomberg Law analysis of White House appointments as of Inauguration Day. They come from top-rated law schools—12 from Yale Law alone—and their experiences lean heavily toward many years in Washington with little in the private sector.

The collective resumes highlight Biden’s intention to reinstate old-school policymaking amid a global pandemic and slew of other coalescing national crises. Surrounding himself with people who are well-versed in the pitfalls of regulation could help avert the legal flubs that repeatedly sabotaged President ‘s ability to advance his agenda.

“It’s not necessarily the training in this statute or that case law” that the president is relying on, said Trish Refo, president of the American Bar Association. “It’s people who have critical thinking and problem solving skills.”

In addition to Yale Law, top-ranked law schools attended by top aides include Harvard, Georgetown, University of Chicago, and New York University. Most lack law firm experience, though 11 had stints at places such as WilmerHale, Jenner & Block, and O’Melveny & Myers during their careers. Corporate experience is also slim, though two worked at —one in the general counsel’s office.

Eighty-five percent of Biden’s senior staff worked in the executive branch under President . A third spent a portion of their career working for members of Congress, including stints managing the Senate floor for Majority Whip (D-Ill.) or advising then-Sen. Biden when he chaired the chamber’s Judiciary Committee. Senior-level hill aides often have a law degree: at least 22% of House leadership and committee staff attended law school, according to a 2019 survey.

The White House did not respond to requests for comment.

A few of the law school graduates—such as Jonathan Su, Stuart Delery, and Danielle Conley, are doing expressly legal jobs in the White House counsel’s office under former law professor Dana Remus. But others aren’t necessarily doing traditional lawyering, such as senior adviser Mike Donilon, who has been at the president’s side for decades, and , head of the White House Office of Public Engagement.

Biden pitched himself to voters as a steady leader who could act quickly to steer the country through crisis, and law schools train students to set emotions aside, analyze complex sets of facts, and follow process.

“When people see there are lots of ‘lawyers,’ they have to remember there are lawyers who could be there for any number of different reasons, but what they share is a certain kind of intellectual training that’s very rigorous and academically demanding,” said Vincent Rougeau, president of the Association of American Law Schools. “That allows them to do some things that have a high level of complexity in an effective way.” 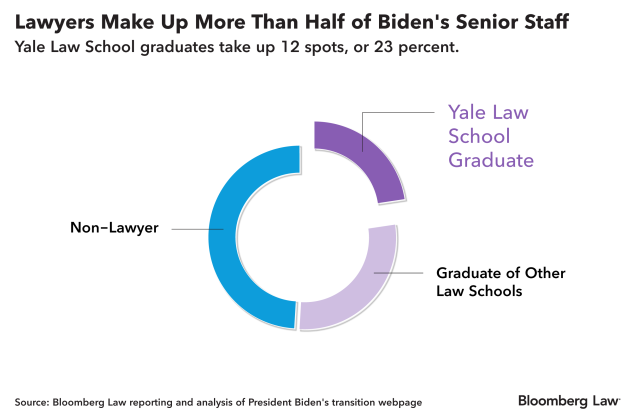 The courts struck down a number of Trump health, immigration, and environmental rules—including after he left office—because staff violated the law that governs how federal agencies develop and issue regulations. One analysis from the Institute for Policy Integrity at New York University, a non-partisan research group focused on governmental decision-making, found that the administration lost more than 80% of its legal attempts to undo regulations or write new rules.

A report from Public Citizen, a consumer advocacy organization, found that Trump’s team violated an obscure law when writing regulations in its final days, giving Biden the opportunity to freeze dozens of last-minute Trump rules.

Trump was known for prizing loyalty over experience when picking his closest aides. The most enduring members of his senior staff, a group known for its high turnover, included his daughter Ivanka Trump, whose degree is in economics, and son-in-law, earned a law degree from George Washington University but spent her career in polling before joining the White House, and only two of Trump’s four chiefs of staff, and , attended law school.

Former White House counsel earned his law degree from Widener University and worked as an elections lawyer before joining the administration.

Biden’s chief of staff, Ron Klain, is a Harvard Law graduate whom Obama once appointed to a federal agency that recommends improvements to how the government writes regulations. (Trump appointed McGahn to the same council.) Jessica Hertz, the president’s cabinet secretary and a University of Chicago Law alumna, worked in the little-known White House Office of Information and Regulatory Affairs during the Obama years.

In Democratic administrations, that office tends to serve as the nerve center for regulations written across the executive branch. It fine-tunes rules penned by individual agencies, makes sure each agency’s proposals align with the president’s policy preferences, and checks that they don’t contradict another department’s perspective on an issue. Biden has yet to pick someone to head that office.

Regulation “is a whole system, just like the criminal law system,” Rougeau said. “It’s a system that is often invisible to a lot of people unless they have to engage it.”

Being surrounded by staff with similar backgrounds poses a potential risk if Biden wants a breadth of perspectives ahead of making a decision, said , former chief of staff to President Bill Clinton, in a phone interview. Administrations falter when a president lacks input from outside the White House bubble, such as when Clinton cut down on public appearances around the time of his impeachment in 1998, he added.

The White House, however, can get access to outside policy specialists easily, said , who served as a top domestic policy aide to President before leaving to run the Education Department.

“As far as I am concerned, whether it is dogcatcher or lawyer, the one thing these people have in common is their ability to understand and navigate Washington, which is absolutely fundamental for a successful presidency,” said Ken Duberstein, who served President Ronald Reagan as chief of staff, in a phone interview.