Emma Compton, who graduated from law school only two years ago, is juggling everything from medical agreements to intellectual property matters and stadium sponsorship deals in her new role with the team.

For Compton, who grew up in Cincinnati and has been going to Bengals games all her life, her dream job is a product of hard work and—like any good football player—being in the right place at the right time.

“I was a fan first and always had a passion for this team,” said Compton, who interned for the Bengals in college. “But being able to mold two different passions of mine in sports and the law is awesome and kind of surreal.” 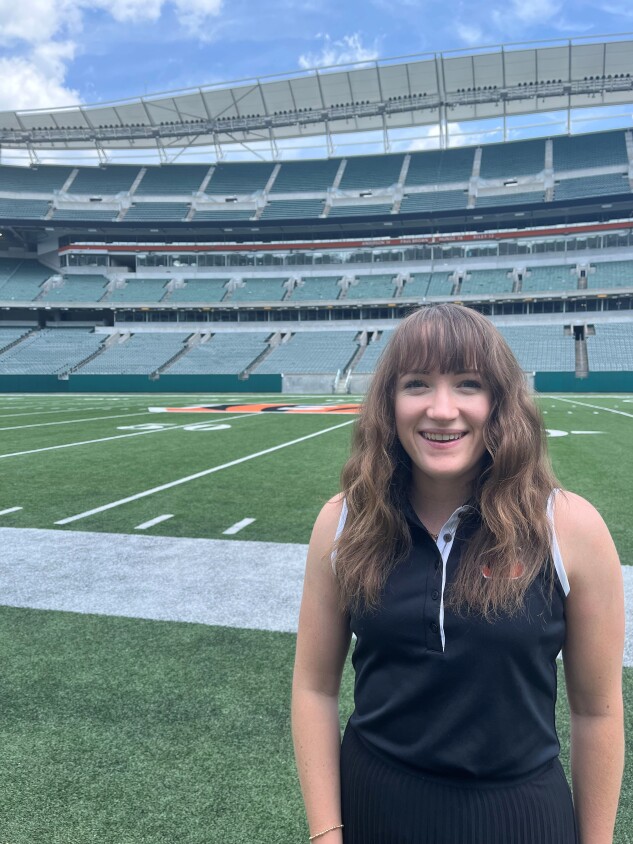 While August is often a month for vacation and a lighter workload for many in-house lawyers and their Big Law brethren, Compton is now in her busy season. The Bengals are selling naming rights to their 65,500-seat Paul Brown Stadium to Paycor HCM Inc., a human resources software company, and are currently in a preseason schedule ahead of a regular season opener set for Sept. 11 against the rival Pittsburgh Steelers.

Compton was hired amid negotiations for the Paycor deal, which will change the name of a stadium named after the Bengals’ late co-founder and father of current owner and Harvard Law School graduate Mike Brown.

Last season’s unexpected run to Super Bowl LVI, which the AFC champion Bengals lost 23-20 to the Los Angeles Rams, and a desire to secure new revenue streams led the club to add a dedicated in-house counsel, said W. Stuart Dornette, a longtime legal adviser to the franchise and partner at Taft Stettinius & Hollister.

Robert McDonald, a partner and chair of the business practice at Taft, took the lead for the Bengals as outside counsel on the stadium naming rights deal.

Compton said she’s working closely with Taft lawyers on several matters, including the 16-year agreement with Paycor that Sportico reported could annually generate between $8 million to $12 million for the team. She praised Dornette and Taft, which helped incorporate the team in 1967, for getting her up to speed in her new job.

“It helps to have someone in-house to filter questions and answer quickly,” said Compton about her position with the club, which she started in May.

Bloomberg Law reported in February on the Bengals being one of the few NFL franchises not to have a dedicated in-house counsel. The team has had lawyers in non-legal positions. Brown’s family includes his daughter Katie Brown Blackburn and her husband Troy Blackburn, both former Taft associates.

It was Troy Blackburn, who along with his wife are part of the business side of Bengals management, who Compton said helped her break into the sports business.

During her time as an undergraduate at the University of Cincinnati, Compton spent four years working for the Bengals as part of their game-day staff, first as an intern.

The additional responsibility led her to go to school part-time. “I was happy that they trusted me to take on such an important role as a college student,” Compton said.

She graduated in 2020 from the University of Dayton School of Law and landed a job as an associate at Keating Muething & Klekamp, a Cincinnati-based law firm with ties to other professional sports teams in the city. Compton did some game-day marketing work in college for FC Cincinnati, a Major League Soccer team that earlier this year hired a former Keating Muething lawyer as its head of legal affairs.

Compton handled corporate and real estate matters at Keating Muething, where she sharpened her general business law skills, a necessary background for making a move in-house in the sporting space. She also went out of her way to work with other lawyers at the firm doing work for sports industry clients like FC Cincinnati.

“Sports is such a niche area, it felt like I needed to get experience in other areas like IP, which I’m doing a lot of here,” Compton said. “Pigeonholing yourself to one area of the law when you’re so young doesn’t necessarily work for long-term career success.”

For former associates like herself looking to snag a coveted legal job in the sports sector, Compton emphasized the critical importance of networking—she kept in touch with Troy Blackburn. Compton was considering another opportunity when she approached Blackburn earlier this year to get his thoughts about that position.

“I came to Troy because I viewed him as a mentor, appreciated his advice, and took it to heart—it felt like he had my best interest in mind,” Compton said.

Blackburn, however, also had the Bengals’ needs in mind. He told Compton the team was looking to hire someone, and soon the former intern was back with the Bengals.