Several states say they could make their bar exams easier to pass as a way to address racial diversity problems and access-to-justice issues entrenched in the legal profession.

Their statements coincide with the first data from California, which permanently lowered its “cut score” last summer just incrementally—but saw significant changes in the racial make-up of those passing the test to become its newest lawyers.

“We anticipate that changes to the bar exam may involve changes in scoring,” said Idaho Supreme Court spokesman Nate Poppino. “Diversity and inclusion, access to justice, and minimum competency will all be issues to consider if and when the bar exam format and passing score are changed.”

Court officials from Texas, Arizona, and Michigan said they’re also monitoring efforts from a national testing group to modify the bar exam, with an eye toward eventual changes in their own states.

“We’re very interested in a diverse legal profession to be able to best represent a very diverse state,” said Texas Supreme Court Justice Brett Busby. “We know the cut score may play a role, but we need to collect some real data on this.”

Several other states—including New York, Pennsylvania, Connecticut, North Carolina, and Utah—said they could consider lowering cut scores based on their own reviews and after studying how the moves play out elsewhere. Their answers came in response to questions from Bloomberg Law to bar exam authorities and top courts in the 50 states and Washington, D.C.

Lowering exam passing scores even slightly could boost the ranks of Black and Hispanic attorneys, according to the data from the State Bar of California released on March 5.

The state found that lowering the cut score from by about 3.5%—from a score of 1,440 to 1,390—led to about a 15% higher passage rate than would have been the case had the cut score not been lowered, said California state bar spokeswoman Teresa Ruano.

Other factors may also have contributed to the jump in passage rates. California and several states that moved their tests online for the first time reported an upswing in passage rates in 2020. The multiple choice portion of the test was cut in half for the October 2020 exam to 100 questions. 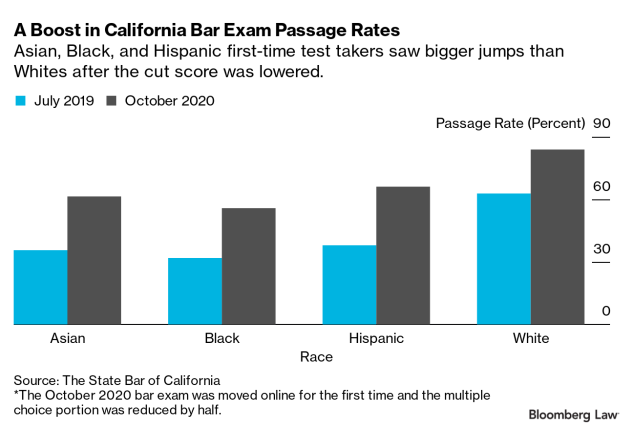 Bar exam reform advocates have argued that lowering cut scores could help address a pair of issues plaguing the legal profession: its overwhelming whiteness in comparison with changing American demographics, and the need to provide access for civil legal help, especially as Covid-19 has spurred job losses in the millions and growing numbers of evictions.

“We need lawyers more than ever to address the kinds of harms that are present,” said Victor Quintanilla, an Indiana University law professor who co-authored a recent cut score study. “It’s urgent that we solve this soon.”

In his sole dissent from the March 25 decision in Rhode Island, state Supreme Court Justice William P. Robinson III wrote: “It is my earnest conviction that caution should be the watchword when a proposal is made to make such a change with respect to an exam, the successful completion of which is an important prerequisite to admission to the bar.”

Two recent, connected studies found no relationship between cut scores and the number of complaints, formal charges, or disciplinary actions taken against attorneys.

The National Conference of Bar Examiners in January recommended a restructured test with greater emphasis on lawyering skills “to better reflect real-world practice and the types of activities newly licensed lawyers perform.”

Washington state, Oregon, North Carolina, and Hawaii temporarily lowered their cut scores for the October 2020 exam, citing the pandemic. All except Oregon extended the lower score through the first 2021 exam last month. Washington state announced it’s extending its lower score at least through its July test.

In 2003, when the Florida Supreme Court increased the state’s scaled bar exam passing score from 131 to 133 out of a possible 200—and ordered that the score be raised again the following year to 136—it relied on “empirical analysis” of minimum competence needed to practice law in the state , said Michele Gavagni, executive director of the Florida Board of Bar Examiners.

Florida does not offer “reciprocity” to experienced lawyers already admitted to practice in other states, meaning those attorneys generally need to pass the bar exam if they want practice in the Sunshine State.

The board is now doing a “comprehensive analysis” of the practice of law in Florida before making any new recommendations to the court, Gavagni said, to ensure any recommendations “will continue to be based on rigorously developed evidence.”

State courts and bar exam authorities are the “decision-makers” when deciding on a bar exam passing standard, said NCBE spokeswoman Valerie Hickman. “In other words, jurisdictions decide what performance level (the cut score) constitutes an appropriate demonstration of proficiency in the knowledge and skills (the test content) assessed by the bar exam.”

While Florida and several other states still have their own bar exams, 38 states and the District of Columbia administer the exact same test: the uniform bar exam.

But the passing score isn’t uniform. Those 38 states—15 of which also include jurisdiction-specific law components as part of the test—have a hodgepodge of nine different cut scores ranging from a high of 280 in Alaska to a low of 260 in Alabama and four other states.

“What is it about the practice of law in these states that demands that Ohio or Texas attorneys earn ten more points to pass than would be required in Alabama?” wrote Marsha Griggs, a law professor at Washburn University School of Law in Kansas, in a 2019 paper. “If the content of the exam is identical across jurisdictions, why does it take sixteen more points to prove competence in Colorado than in Missouri?”

Rhode Island’s decision to lower its passing score to 270 from 276 is retroactive to February’s exam. The court didn’t specify reasons for lowering the score but said it was accepting a recommendation from the state’s Board of Bar Examiners.

Outside the states using the standard test grading scales vary widely, so it’s a challenge to compare various tests that include multiple choice and essay components.

The NCBE converted state scales to one connected to the multistate bar exam, which almost every U.S. jurisdiction includes in its test. This scale historically showed Delaware with the highest cut score, followed by California.

When the California Supreme Court lowered its cut score last July, the justices noted that California was one of two states “with the highest pass score for its minimum competency exam"—implying that it needed to be adjusted to be closer to the national mean.

The study by Quintanilla and a team of academics found that lower cut scores narrow the “achievement gap” between Whites and racial and ethnic minorities, and would spur an increase in the number of newly admitted minority attorneys in California. It also noted that 60% of California adults are people of color, but just 32% of its attorneys were as of 2019.

The study looked at more than 85,000 tests from 2009 to 2018, and included discipline data from the American Bar Association.

The legal profession has historically proven tougher for minorities to enter, in part because of the costs involved, but also other issues with standardized testing.

Griggs said the bar exam in most states has “not evolved substantially” for nearly 50 years.

“To this day we see racial disparities in bar pass outcomes,” Griggs said at the virtual conference. “We see incongruity between the skills necessary for law practice and the content of the bar exam.”

“Most states are not doing empirical work to establish the proper cut score,” Smith told Bloomberg Law. “That’s the very definition of arbitrariness.”