Multistate bar exam takers across the country performed about as well on the July edition of the test as those who sat for it the summer before the pandemic started, according to new data.

Lawyers in training scored an average 140.4 on the July MBE, according to the National Conference of Bar Examiners. That’s down slightly from 141.1 in July 2019, the most recent instance when a full national group was tested.

The numbers were released in the wake of remote-proctored bar exams administered during the pandemic that repeatedly were marred by accounts of tech glitches and spurred a sense of chaos. The next round of tests in February 2022 are each set to be held in-person, meaning facial IDs will once again be made exclusively by human proctors.

The overall number of test takers from the total number of U.S. states and jurisdictions, almost 45,900, barely exceeded the number who took the test in July 2019, a bit over 45,300, the NCBE said. The group noted that it couldn’t accurately compare the July tests with those more recent tests administered during the pandemic, given that much smaller groups of examinees took the full MBE in July, September, or October of last year. 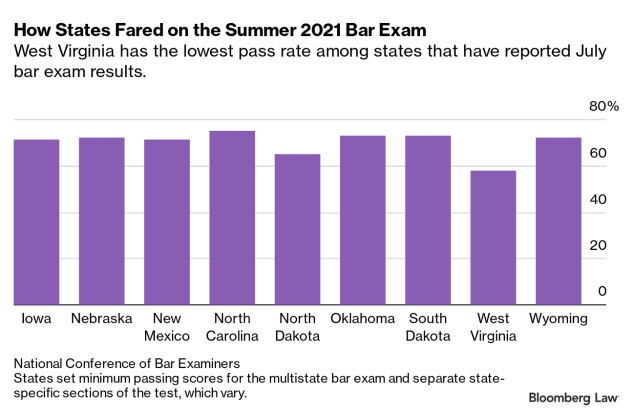 The MBE is composed of 200 multiple choice questions—a number cut in half during the October 2020 bar exams in response to the pandemic, but later restored back to 200.

The MBE is an important portion of overall state bar exams, which are administered twice per year. Passing scores, determined state by state, are based on performance on the MBE, as well as essay tests and other legal knowledge gauges.

Individual state overall bar exam pass rates for the July 2021 exam are being released in drips and drabs; so far, just nine mostly smaller states have released their rates, according to the NCBE.

The tests held after Covid-19 took root—which included remote proctored exams held for the first time in many of the largest states—were plagued by technical issues that many test takers say caused them intense distress. Soon after the late-July test, a Pennsylvania-based plaintiffs law firm said it was is weighing a class action suit over the faulty software from ExamSoft used in the exams.