Steptoe & Johnson LLP attorneys examine patent filings for autonomous vehicles to explain where the U.S. stands with self-driving vehicles, including the state of technology and what is needed to put AVs on the road. They provide strategies for manufacturers and tech companies to avoid patent litigation.

The development of autonomous vehicles represents a considerable opportunity. In 2021, the total investment activity for self-driving vehicles increased five fold from 2020, from $1.3 billion in 2020 to $6.5 billion in 2021.

Innovation is crucial to the development of autonomous vehicles and patents play an important role in encouraging creative activity. As shown below, autonomous vehicle patent filings have been on the rise in recent years. Though many of the recent infringement lawsuits targeting automakers were initiated by non-practicing entities, as the market grows and develops, patent litigation between automaker competitors might become justified. It is therefore important for automakers to continue to build their patent portfolios.

Generally speaking, there are five levels of automated driving, with level zero having no automation at all. At the highest level of automation, level 5, cars are capable of performing all driving functions under all conditions, by driving themselves without any human interaction.

The transition to self-driving cars will be a gradual process, with more and more autonomous features being added to new models of cars. Currently, level 2 cars commercially available—for example, Tesla’s Autopilot and Cadillac’s Super Cruise. These vehicles have many autonomous features, such as adaptive cruise control, lane-keeping, lane-changing, auto-parking, emergency braking, and semi-autonomous navigation on highway.

One category of vehicles particularly suitable for autonomous driving is self-driving trucks. Trucks mostly drive on interstate highways, which are simpler environments than local city roads, and autonomous trucks can drive more efficiently and safely than those without automation. Recently, Walmart started using fully driverless trucking in its online grocery business. FedEx is also conducting a pilot using self-driving trucks between Dallas and Houston.

A number of companies are also testing driverless taxi, called robotaxi, in many different places around the world, especially in the U.S. and China. These are usually tested in a geo-fenced area that has virtual boundaries, where the vehicles are confined to certain routes and certain parts of the city. Some robotaxi vehicles being tested have level 4 self-driving capabilities, which can be fully autonomous within a geo fenced area.

Putting autonomous vehicles on the road depends on the development of a variety of technologies, including automatic emergency braking, adaptive cruise control, automated parking, image recognition, traffic recognition, machine learning, and the ability of the vehicles to detect and communicate with the surrounding environment. It also needs a network fast enough to support the communication and the processing of all the information.

Innovations in technologies often correlate with the filing of patents. To get a trend of patent filings relating to autonomous vehicles, we used terms “autonomous or self-driving” in combination with “car or vehicle” to search the title, claims, and abstract of U.S. patent publications.

As the following chart shows, the U.S. patent publications have grown exponentially. The top assignees include not only traditional car manufacturers such as Ford, GM, and Toyota, but also high-technology companies, for example, LG, Waymo, Uber, Baidu, IBM, Zoox. 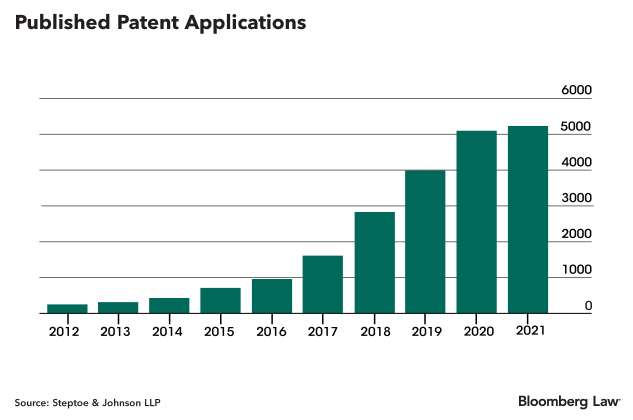 Patent classification is another way to search because certain classifications are particularly relevant to autonomous vehicles. For example, patents of classes G05D and G01S relate to the sensing and mapping technologies, including the radar system, the Lidar system, and the automatic pilot and navigator system.

Most of the cases were filed by non-practicing entities (NPEs), and they were usually terminated early. It is unclear whether the cases were settled with a small amount of money or whether plaintiffs dismissed the cases voluntarily without receiving any payment.

To pressure NPEs to settle, defendants can file an inter partes proceeding, or IPR (a challenge to the validity of a previously issued patent), or can move to dismiss the cases for patents being ineligible or failure to allege sufficient facts.

For cases between competitors, the parties could settle by cross-licensing each other’s patent portfolio, or the defendant could pay a royalty in exchange for a non-exclusive license to plaintiff’s patent portfolio.

It is therefore important for companies to take actions to reduce the risks of patent disputes by developing patent portfolios and monitoring competitors’ technology development.

Most of the district court cases reviewed were filed in 2020 and 2021 in either the Western or Eastern districts of Texas, both popular jurisdictions for patent cases due to its efficient patent rules, speedy time to trial, and experienced patent judges. That is not surprising since venue is important and can impact the chance of early dismissal under Section 101 of the Patent Act, the chance of a stay pending an IPR, and the amount of damages.

In addition to district courts, because automotive cases can involve many parties (not only the traditional car manufacturers, but also retailers, suppliers, and manufacturers of various components), the International Trade Commission can be a potentially attractive forum to litigate automobile-related cases. The ITC has in rem jurisdiction (the power of a court to exercise jurisdiction), and multiple respondents can be named in one investigation without the need to establish personal jurisdiction over any of them.

Boyd Cloern is a partner at Steptoe & Johnson LLP, Washington, D.C., in the firm’s Intellectual Property group. He focuses his practice on trade secret, patent, copyright and antitrust matters.

Li Gou is an associate at Steptoe & Johnson LLP, Washington, D.C., in the firm’s Intellectual Property group. She focuses her practice on patent, trade secrets, copyright, and trademark.