Members of the Baylor Bears celebrate after defeating the Gonzaga Bulldogs 86-70 in the National Championship game of the 2021 NCAA Men's Basketball Tournament on April 5, 2021 at Lucas Oil Stadium in Indianapolis, Indiana.
Jamie Squire/Getty Images

The National Collegiate Athletic Association has officially given longtime general counsel Scott Bearby the additional title of senior vice president of legal affairs as it prepares for its lucrative annual men’s basketball tournament.

Bearby has been “appointed to the permanent position and is no longer in an interim role,” NCAA spokeswoman Saquandra Heath said via email. The organization is the governing body for student athletic programs in the U.S. and Canada.

Bearby stepped into the legal affairs job on an acting basis last year following the departure of chief legal and operating officer Donald Remy, who joined the Biden administration as a deputy secretary in the Veterans Affairs Department.

Within the last year the NCAA has sought to address issues over student athlete compensation and gender equity among athletes.

Bearby, who spent six years in private practice before joining the NCAA in 1999, has served in various legal positions in its Indianapolis headquarters. 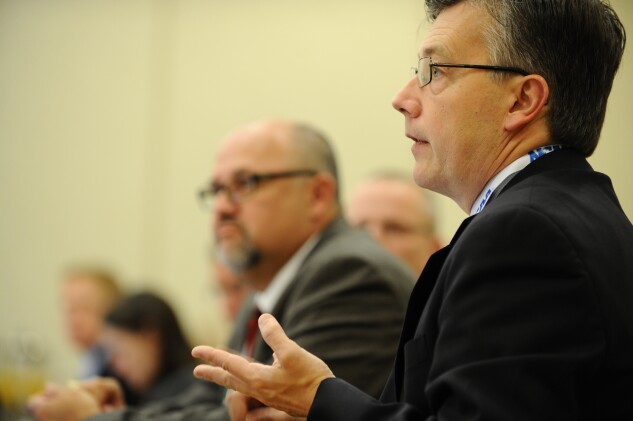 Bearby’s responsibilities include “managing litigation involving the national office and supporting its governance and sport committees,” according to a profile page on the NCAA’s website. An archived version of the page shows that he still held the “interim” tag to his title as of late February.

Bearby will also oversee hearing operations and government affairs for the NCAA in the new role.

The NCAA’s most recent federal tax filing shows that the nonprofit organization paid nearly $414,000 to Bearby during fiscal 2018-19, while Remy received more than $1.3 million in total compensation.

The U.S. Supreme Court ruled last summer in a long-running legal battle between the NCAA and college athletes, a decision that cleared the way for greater compensation for players by allowing them to earn money from their names, image, and likeness. Such disputes have generated millions of dollars in legal bills for law firms representing the NCAA.

The NCAA itself also makes billions of dollars from broadcast rights agreements for March Madness, an annual men’s and women’s college basketball tournament whose first stage tips off this week.

The NCAA and its president, Mark Emmert, faced a fresh round of criticism this week from three Democratic lawmakers accusing the organization of making “inadequate progress” in rectifying historic disparites between men and women athletes.

Last year the NCAA retained Kaplan Hecker & Fink, a New York-based law firm led by prominent litigator Roberta Kaplan, to compile a gender equity review of its men’s and women’s basketball tournaments. The firm recommended that the NCAA combine the festivities surrounding its men’s and women’s Final Fours, the final stage of the postseason playoff that determines a national champion.

The Associated Press reported last month that the NCAA had yet to take that step, but has made other changes to bridge the gap between both tournaments.

Public records show that Brownstein Hyatt Farber Schreck was paid $360,000 by the NCAA last year to lobby on a range of issues, including the collegiate athletic model, student athlete legislation, and matters “related to athletic scholarships, health and safety, gender equity, academic success” and amateurism in higher education.