Cameron Findlay says he brought technology and a fresh perspective to agriculture and food company legal department when he joined nearly eight years ago.

“I felt my role was to take the great lawyers we have and expose them to some of the best practices other legal departments had put in place, and I think we slowly but surely have been making great progress in the last seven, eight years,” Findlay, ADM’s senior vice president and general counsel, said.

Since Findlay joined Chicago-based ADM in 2013, his legal department has begun using legal technology, brought more work in-house, and pushed for alternative fee arrangements with its firms. These changes contributed to a decrease in ADM’s outside counsel spend, from roughly 85% to 50% of its legal budget.

Findlay previously spent a decade in-house with medical device company Medtronic PLC and insurance company Aon PLC. Before that, he held multiple government positions including deputy labor secretary and deputy assistant to the president in the George H.W. Bush Administration, and he was a partner at Sidley Austin, where he worked for eight years.

He spoke with Bloomberg Law about the transformation of ADM’s legal department and how the company manages relationships with its outside lawyers, including through issuing report cards and leveraging spend data.

Bloomberg Law: How much work do you keep in-house, and how much do you give to outside firms?

Cameron Findlay: We do a lot of work in-house—a lot more than when I arrived. When I got here, we didn’t have very good data, but we estimated that 80 to 85% of our legal spending was with an outside firm. That meant that we were essentially acting just as in-house folks who went out and hired outside firms. Outside firms are more expensive, and they don’t know as much about our business, so I wanted to move to a model where we did more of the work in-house. Now, it’s probably closer to 50% inside and 50% outside in terms of our spending. That’s a good benchmark for a lot of companies.

BL: Did you make any other changes to ADM’s legal department after you arrived?

CF: I felt my role was to take the great lawyers we have and expose them to some of the best practices other legal departments had put in place, and I think we slowly but surely have been making great progress in the last seven, eight years.

BL: How does your team use any legal technology?

CF: One of the first things we did was get better technology. We put in place a matter management system that allows us to track every penny—well, we think we track every penny—of spending by an outside law firm. We can even track the diversity of the lawyers who are working for us, how many hours were done by women or people of color. It allows us also to enforce outside counsel guidelines as to what we’ll pay for and what we won’t pay for. We can do all that through our better management system so that we can just lop stuff off before we even get to the reviewing lawyer.

We use Onit, and we were one of the first major companies to use it, I believe. It’s a very good system because it’s beyond just matter management and e-billing, and we use it for all sorts of purposes throughout the company. It’s a good platform that you can plug and play other aspects onto. 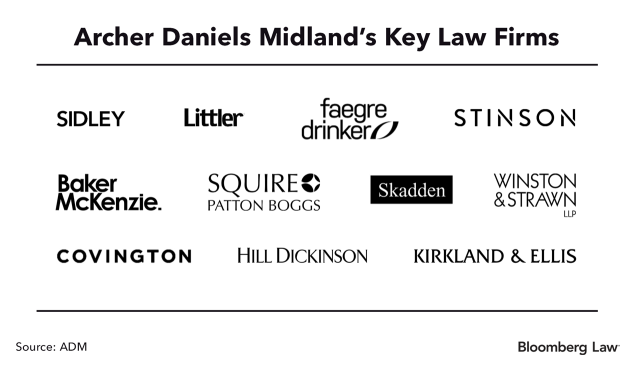 BL: ADM uses quite a few outside law firms in the U.S. and abroad. How do you manage them?

CF: We do have a law firm program that we call the ADM Law Firm Alliance, or ALFA for short. In our ALFA program, we have approximately 20 firms, and it’s our partnership model. One of our goals has been to extend the ALFA program globally, and we’ve achieved that. Each of our regions has its own set of preferred law firms, which, if it’s possible, we want to be the same firm we’re using in the U.S. as well.

We sit down with our top firms early in the year, every year, and through our Onit system, we’re able to prepare a firm report card for them that shows how their rates compare to other law firms, how their staffing compares, in terms of whether they are partner heavy or associate heavy. It also shows how they’re doing in terms of the diversity of the team that they’re putting on our matters. That’s been a really effective tool. We can sit down with a firm and say, “Your team was 100% White male. Your competitors here have been able to put much more diverse teams on our matters. That’s something we want you to work on for next year.”

BL: What’s the benefit of the ALFA program?

CF: It’s really a partnership model. We think it benefits the firm to have a steady amount of work from us, and that allows us to ask them for their best people, for good rates, or fixed fee arrangements, and it puts a long-term gloss on the relationship too. The firm can realize that if they do a fixed fee with us on one matter, and they end up spending more time on that, then on the next matter, it may well be that we set their fee higher than the actual market rate and they’ll benefit in that way. It gives both of us a long-term perspective on the relationship.

BL: What matters do you keep in-house now, and what do you give to outside firms?

CF: We do use law firms for our large transactions and most of our litigation because our litigation is all over the world and we don’t have lawyers licensed to practice before the courts all over the world. I tend to think that there are three major reasons you use outside law firms. One is expertise. We’ve been dealing with a lot of healthcare issues in the Covid-19 pandemic, and we didn’t have any in-house healthcare players, so we have to go to law firms to ask for expertise on things like FDA approval of our testing protocols.

Then the third reason is when we need some degree of independence. If we have an allegation about a board member or senior executive where third parties would look at us and say, “You’re not an objective investigator,” then we’ll go to a law firm, often one that we haven’t used before, and ask them to handle an investigation.