Bridging the gender gap in patent law would increase U.S. innovation and foster social and economic growth, Crowell & Moring IP attorneys explain. Revising the list of degrees for eligibility to sit for the patent exam to include those in advanced and cutting-edge fields is a good first step, they say.

It is no secret that entry and retention of women in the fields of science, technology, engineering, and mathematics (STEM) is disproportionately low compared with that of men. This disparity is apparent in every industry that requires a STEM degree, including patent law.

The gender gap in patent law has become so pervasive that three senators recently expressed their concern in a letter to the director of the U.S. Patent and Trademark Office’s (PTO) about the detrimental effect it is having and will continue to have on patenting innovations—especially those made by women. In response, the PTO announced that it is weighing increasing the number of undergraduate degrees that qualify applicants to sit for the patent bar exam.

Some have reacted to the senators’ letter by warning that expanding the pool of potential patent practitioners would “lower the bar” of admission. But, the facts belie the truth of that view.

The criteria for eligibility to the patent bar require that any applicant applying to sit for the patent exam must demonstrate that they possess the “scientific and technical training necessary to provide valuable service to patent applicants.” 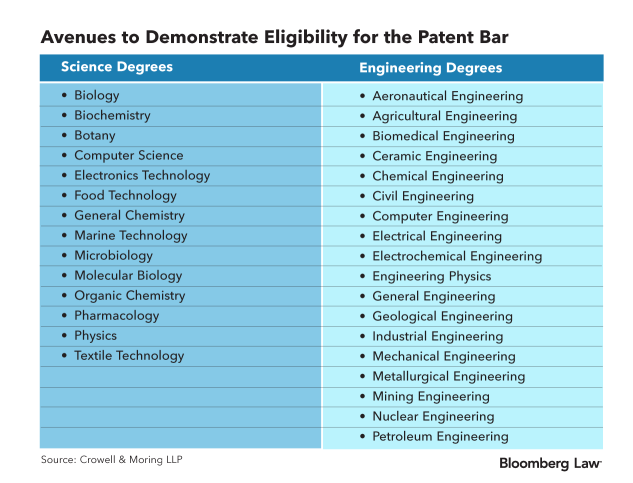 Category A (see chart above) is the most direct way to make this showing. An applicant with a bachelor’s degree in one of 32 subjects, more than half of which are engineering degrees and disproportionately go to men, is automatically eligible to sit for the patent exam. However, the degree awarded must exactly match what appears on the PTO’s list. So, while a degree in biology, microbiology, or molecular biology will qualify you to take the exam, a degree in biotechnology—a rapidly growing field, does not.

Revising the list of degrees that qualify would have benefits that greatly enhance the patent attorney field in at least two ways. First, it would reflect the evolution of science that has progressed since the last revision to include the most cutting-edge fields, which would naturally better service the rising numbers of inventors in those fields seeking patents.

Second, it would help balance—at least to some extent—the gender gap as many of those new fields attract a greater proportion of women.

Also, further revising the requirements to allow for advanced degrees, instead of just a bachelor’s degree, would further achieve these objectives—i.e., better service inventors and increase the number of women in the profession.

The senators note that women earn master’s degrees in STEM fields at a higher rate than they earn undergraduate degrees in the same subjects. But, currently, an advanced degree (unlike an undergraduate degree) in one of the 32 subject areas is not itself sufficient to qualify an applicant to take the patent exam. That individual must instead seek eligibility through either Category B or Category C. 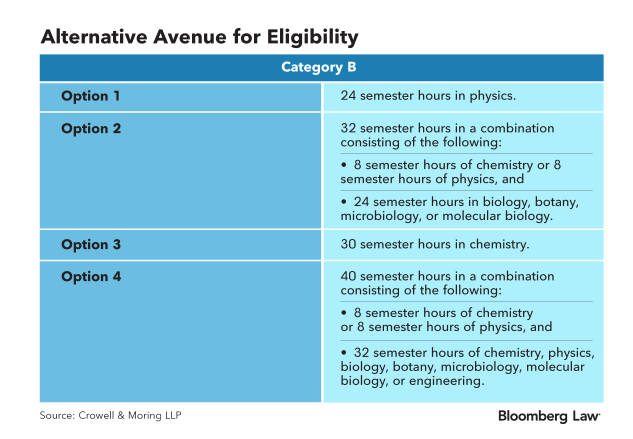 Category C allows applicants to establish the required technical training by passing the Fundamentals of Engineering (FE) test. Requirements for eligibility to take the FE test vary by state. This is a rarely executed option and not a widely available strategy for admission for those who do not satisfy Category A or B.

If the sole criterium for patent bar eligibility is to ensure scientific and technical competence to prosecute patents, it is worth noting that most advanced degree programs in STEM fields have pre-requisites that demonstrate sufficient scientific knowledge to successfully pursue the degree and are often more rigorous than the corresponding bachelor’s degree.

The PTO and those in the patent bar can make sweeping changes by updating the eligibility criteria in Category A. This would help bridge the gender gap and meet the needs of the inventors for whom they would work.

Dispelling the Myth of ‘Lowering the Bar’

We must dispel the myth that such efforts would only come from “lowering the bar” to admission, or worse, from lowering our expectations of the level of skill and technical knowledge that patent practitioners ought to have.

For example, when women went into medicine, by 2017, 85% of residents in the field of obstetrics/gynecology were women. Rather than lowering the quality of care that patients received, patients were thrilled to have a practitioner who understood the technology, so to speak.

Likewise, paving the road for women’s increased participation in the patent system would not “put inventors at risk.” Quite the contrary. All patent practitioners have always been ethically precluded from accepting any representation which they feel they are not competent to handle for any reason, be it legal or technical. And by its very nature, every utility patent has a learning curve because it is novel. They will all require some independent study on the practitioner’s part.

It is unlikely that one’s ability to prosecute a patent would turn on a general chemistry course from freshman year of college. Rather, the basic scientific understanding is what allows a patent practitioner to work with inventors and other experts in the field. It is not only that foundational knowledge that is important, but also the demonstrated willingness to learn through self-study to master new material, just as one would in a graduate program.

It is also important to acknowledge that the gender gap is not a gendered problem. The senators noted that women inventors would likely benefit from having access to more women patent practitioners.

However, this benefit would also be felt by the country as a whole. As demonstrated in a PTO report, the innovative potential of women has been drastically underutilized. One of the clearest and most direct routes to increasing U.S. innovation, and by extension, to fostering social and economic growth to all, is by bridging the gender gap in patent law as to both practitioners and inventors.

While the lack of women in STEM is a societal problem, the number of women who could qualify to be patent practitioners—and enhance the quality of the patents issued—can begin redress by the patent bar itself.

Anne Li is a partner in Crowell & Moring’s New York office and a member of the firm’s Life Sciences Litigation, Intellectual Property and Trade Secrets groups. She advises clients in the biotechnology, biopharmaceutical, medical device, and mobile device industries.

Michelle Chipetine is an associate Crowell & Moring’s New York office and a member of the firm’s Intellectual Property and Health Care groups. Her practice focuses on patent litigation and representing health-care entities and nonprofit corporations on a wide range of transactional, corporate, and regulatory matters.