Women and minorities made only minimal gains in joining law firm ranks over the past decade, American Bar Association data released Thursday shows.

Black and Native American representation in the legal industry decreased slightly in the last 10 years, while Hispanic and Asian lawyers gained less than a percentage point each. Multiracial people made up 2% of all lawyers, and Hawaiian/Pacific Islanders comprised 0.3%.

The report compiles survey data collected by the ABA and information from state bar associations, federal agencies, and lawyer interest groups. In addition to demographic data, the report includes a chapter on how Covid-19 and remote work affected lawyers.

“The pandemic has changed the way lawyers work—perhaps permanently,” the report said. “But the pandemic did not affect everyone equally.” 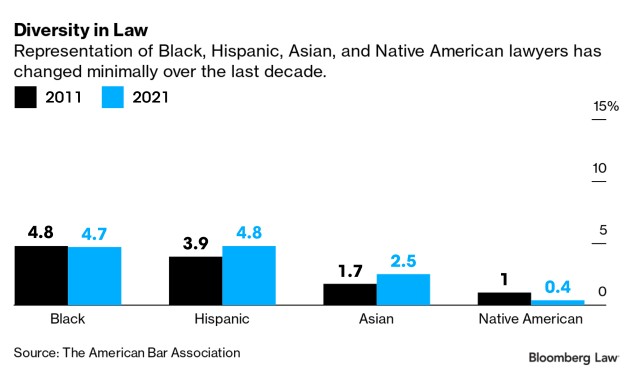 Senior lawyers, or lawyers over the age of 62, fared the best during the pandemic. Around three-quarters said they were ‘somewhat comfortable’ or ‘extremely comfortable’ adopting new technologies for remote work, and they were less likely to be stressed about work compared to lawyers 61 or younger.

The discrepancy might be explained by work and family circumstances, the report said.

The data shows significant changes in the geographic spread of lawyers.

While over a quarter of the country’s 1.3 million active lawyers live in California or New York, Utah and its up-and-coming legal market saw the highest rate of growth. Since 2011, the population of lawyers in Utah has grown 31% to nearly 9,000.

Additional findings from the profile show: