Welcome back to the Big Law Business column on the changing legal marketplace written by me, Roy Strom. This week, we examine what Kirkland’s finances will look like in 2031 if it turns in another decade-long performance like it just finished. Sign up to receive this column in your inbox on Thursday mornings.

It’s always a big day when Kirkland & Ellis’ year-end financial results are unveiled. There was even an extra little buzz this year after the Financial Times reported in January that the firm may be the first to crack $5 billion in revenue.

The semi-official results came in last week, and the firm’s top line didn’t quite reach $5 billion. Still, Kirkland did have another blowout year: revenue up 16% to $4.8 billion, and profits per equity partner up nearly 20% to nearly $6.2 million, The American Lawyer reported.

A good number of other firms grew by even bigger leaps in 2020. Davis Polk’s financial performance might have been the best single year in modern AmLaw history. That’s a story for another day.

Here’s why Kirkland is on my mind today: In a year of financial returns that look like historical anomalies, the firm’s performance didn’t really stretch the imagination. It has been putting up eye-popping numbers for a while now.

Coming out of the Great Recession, Kirkland in 2009 had $1.4 billion in revenue, $2.5 million in PPP, and a chip on its shoulder. The Chicago-founded firm wanted to earn a place among a group of Big Law’s most highly respected New York firms, which had built their reputations through transactional work for major banks and blue chip companies.

By most any measure, this bid for Wall Street clients and credibility has been extremely successful.

Today, Kirkland is the largest law firm by revenue and it has recruited partners from virtually all the firms it once envied–including cracking the Wachtell partnership for the first time last year. Just as important as its success in the public company M&A market, the firm has stayed on top of the private equity practice, the business line that fueled its ambitions in the first place. And it maintains what is arguably the largest bankruptcy practice in the country.

That’s the rough outline of a decade-long strategy and execution that made its banner 2020 seem like less of an outlier than many other firms. From 2009 through 2020, Kirkland’s top line has experienced compound annual growth of 11.7%. Its profits per equity partner have recorded a compound annual growth rate of 8.6%.

I wasn’t writing about law firms in 2009, but my guess is that people at that time wouldn’t believe it if they were told that in 2020 Kirkland would approach $5 billion in revenue and that its average partner would earn more than $6 million a year. Back in 2009, Big Law was probably just hoping the financial world as they knew it hadn’t come to an end.

Coming off 2020, another year history is sure to view as a disaster, the outlook for long-term growth in the industry might again be uncertain. But what would happen if Kirkland was able to stage another strong post global crisis performance, and repeat the financial growth it’s had since 2009?

Plug in another 11 years (see note) of nearly 12% revenue growth and 9% PPP increases, and you get some gaudy stats. The hypothetical firm would have revenue north of $16 billion by 2031, and its average partner would earn $15.3 million. 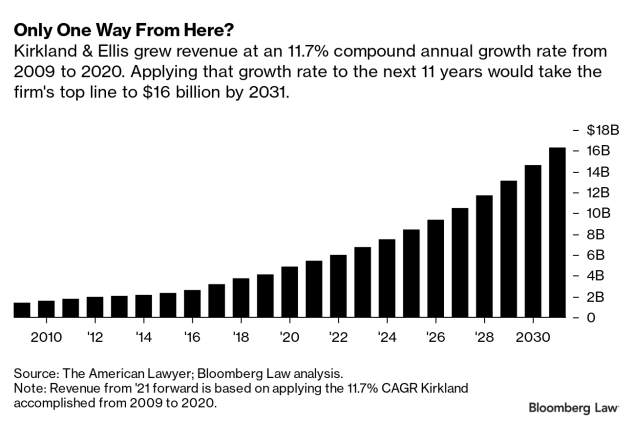 At first glance, I admit the numbers seem outrageous. Maybe they are. But people often underestimate what can happen over long periods of time. So, maybe they aren’t?

Either way, it’s a useful thought exercise: If your firm repeats its financial performance since 2009, where will you stack up against Kirkland if it does the same? Don’t feel bad if you run the numbers and don’t like what you see. I don’t think any firm will win the comparison. But the good news is this is just a hypothetical!

I haven’t done the math for every firm, but a couple of data points are illustrative.

Latham & Watkins is the second largest law firm in the world by revenue, and its top-line figure in 2020 was about $500 million less than Kirkland, according to AmLaw’s early reporting. Like Kirkland, Latham has been one of the fastest-growing firms over the past decade. Its revenue has risen at an annualized rate of 8.2% since 2009. Apply that same growth rate to the firm’s next 11-year stretch, and its top line would be $6 billion shy of the hypothetical we did for Kirkland.

Wachtell is the most profitable law firm, according to AmLaw data, and its average partner in 2020 earned $7.5 million. That’s about $1.3 million more than at Kirkland. Wachtell’s profits per partner have grown at a 5.2% annualized rate since 2009. Apply that growth rate to the firm’s next 11 years, and its PPP in 2031 will be higher than $13 million—but $2 million shy of the hypothetical Kirkland. 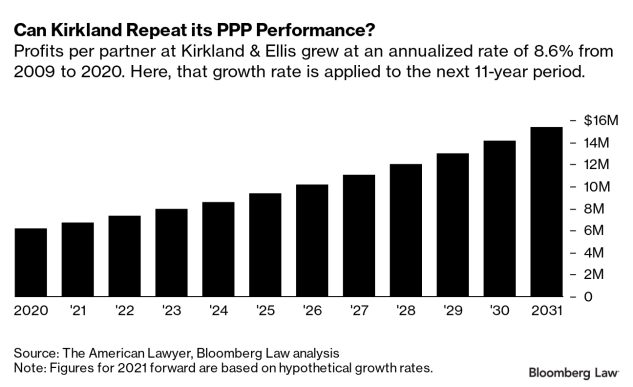 I wrote years ago that Kirkland was the rare Big Law firm to achieve the type of growth in the 2010s that firms were accustomed to before the Great Recession. These figures just illustrate that point. They don’t mean Kirkland is destined to another decade of greatness. But they might add some urgency to the competition.

Or they might make someone ask: Just how sustainable is this growth?

A note on the math: I chose 2009 as the baseline “year 0” for the CAGR calculation because that would represent the firm’s starting point for revenue and profits on January 1, 2010. Technically, a “decade” would have ended with the AmLaw figures from 2019, but we have data through 2020, and more data is generally better than less. It does create an 11-year period, though. If that period was “repeated,” 2020 would be the baseline year and the analysis would run through 2031.

On Jenner & Block: I wrote this week how the Chicago-founded litigation firm believes its values will help it attract lawyers and clients in a time when companies’ “social conscience” is starting to affect their business decisions.

On Greenberg Traurig: There are plenty of ways to boost firm morale, but I’ve not heard of firm leadership hopping in an RV and driving across the country. That’s what Greenberg Traurig’s leaders are up to, Meghan Tribe reports. In their defense, the PGA Tour’s Viktor Hovland eschewed air travel last year and drove to golf tournaments across the country. He did alright.

Speaking of Sports: The XFL did not do alright in its latest iteration, and Brian Baxter reports that its quick demise last year led to a number of its in-house lawyers struggling to find jobs.