The U.S. Securities and Exchange Commission issued a 500-plus-page Monday that would mandate corporate disclosure of greenhouse gas emissions. It builds on years of voluntary efforts.

With publicly traded companies responsible for 40% of emissions, investors have been pressing the regulator for rules. The plan is “the most extensive, comprehensive and complicated disclosure initiative in decades,” said Meredith Cross, a former SEC director who’s now a partner at law firm WilmerHale.

The SEC will review comments from the public during the next 60 days, and may revise its proposal before holding a vote to finalize the rule.

Here are five key takeaways from the SEC’s plan:

Scientists are clear: There is “a brief and rapidly closing window of opportunity” to forestall catastrophic changes to climate conditions that allowed the modern economy to develop, according to —backed by almost 200 countries. To meet international limits, emissions must fall by about 13% a year, PricewaterhouseCoopers estimates. Emissions grew about 5% last year after dropping in 2020 during the pandemic.

Propelled by scientists’ warnings and the actual, accruing damage from fires, floods, heatwaves and more intense storms, investors are demanding that companies address these threats commensurate to their scale and in line with traditional financial regulation. Transparent climate data, investors reason, should guide public markets toward urgent decarbonization. 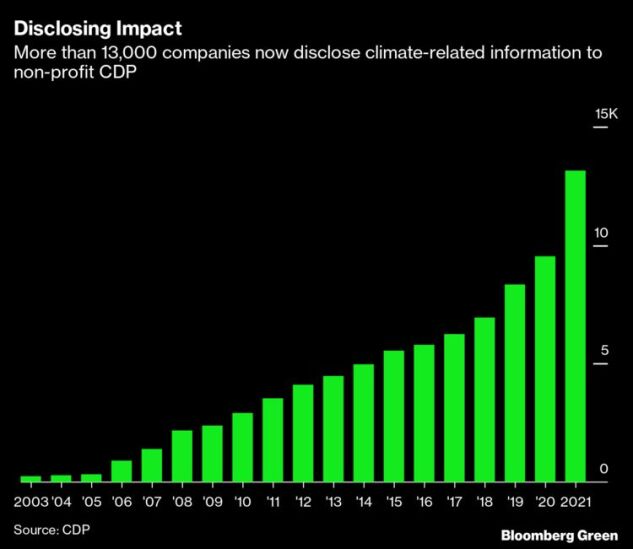 The U.S. is playing catch-up with other parts of the world that have enacted corporate climate rules. In the U.K., the biggest companies will start reporting their climate-related risks next month for the first time, putting the nation on track to be the first in the Group of 20 countries to make such disclosures mandatory.

Lawmakers in Switzerland plan to require some companies to start reporting their climate-related risks in 2024. In the European Union, the rulemaking will likely involve companies having to provide detailed reports about their emissions and plans to transition to cleaner fuels. And last year, New Zealand was the first nation to pass rules requiring corporate climate disclosure.

Thomas Gorman, a Washington-based partner at the law firm Dorsey & Whitney, said the SEC’s proposal also doesn’t go as far as what’s being pursued by regulators in Hong Kong and Singapore.

Many companies already report not only the emissions they’re directly responsible for, through direct combustion (Scope 1) or purchased power or heat (Scope 2)—but also emissions from their supply chains and products. Those emissions, known as Scope 3, are often a company’s largest contribution to global warming.

About 1,020 U.S. companies voluntarily disclosed their Scope 3 emissions last year, according to CDP, a nonprofit that operates the world’s largest database of corporate emissions data. Calculating Scope 3 can be a challenge because data are disparate and there are many ways they can be measured. These figures are particularly important to investors in heavy emitters. were the equivalent of 730 million metric tons of carbon dioxide in 2019, about same as what’s produced by Canada.

The SEC plan makes Scope 3 disclosures dependent on how material they are to a company’s business. A universal Scope 3 mandate would prevent the creation of an emissions loophole where companies could hide some of their Scope 1 or 2 emissions by assigning them to external service providers, said Madison Condon, an associate professor of law at Boston University whose work is cited in the SEC draft.

The SEC drew on several popular frameworks for presenting this information, and used the Task Force on Climate-Related Financial Disclosures as a model because of its global support among thousands of companies and financial institutions worldwide. Michael Bloomberg, founder and majority owner of the parent company of Bloomberg News, is chairman of TCFD.

4. An Eye on Offsets

The SEC’s proposal would require disclosure on how and how often companies purchase carbon offsets to neutralize some of their emissions. Recent years have seen enormous demand for offsets—and raised regarding their actual utility in fighting climate change.

Climate activists have long fought against offsets because they can distract companies from cutting their emissions directly. The inclusion shows the importance of “requiring companies to disclose any reliance on carbon storage or removal or other offsets in their transition plans, since these accounting tricks can often serve to obscure their true climate impact,” said Ben Cushing, a campaign manager at Sierra Club.

Critics of the proposal are in no short supply, including from within the SEC itself. Commissioner Hester Peirce, who voted against the measure, said its “action-packed 534 pages” fails to include a rationale for why the SEC’s existing materiality guidance is insufficient.

Legal debates over the proposal began long before Monday’s release. West Virginia Attorney General Patrick Morrisey wrote to the SEC last March saying if it pursued such a rule, the state would take the agency to court on First Amendment grounds. The Cato Institute said the SEC proposals are already “well beyond [the agency’s] authority and expertise” and “that alone is reason to abandon the course that the SEC has chosen.”

The SEC will move ahead with its rulemaking, but “the real question is how far will the requirements go?” Dorsey & Whitney’s Gorman said.

To contact the authors of this story:
in New York at eroston@bloomberg.net

in New York at skishan@bloomberg.net