Models of human brains are on display in a lab.
Photo by Tony Avelar/Bloomberg via Getty Images

While diversity metrics such as race, gender, sexual orientation, and disability are widely tracked among law firms and legal departments, the use of neurodiversity metrics as part of their DEI initiatives currently lags far behind. Although more organizations plan to measure this important category, a recent survey suggests that neurodiversity’s last-place status will remain the case for the foreseeable future.

According to Bloomberg Law’s 2021 Legal Operations Survey, 72% of respondents currently have metrics to track diversity or well-being. Of those 72%, only 17% reported that their organization is tracking neurodiversity—the range of variations in how the human brain operates, including (but not limited to) autism spectrum disorders, attention deficit hyperactivity disorder (ADHD), and dyspraxia (developmental co-ordination disorder). Only an additional 12% of those respondents said their organization is planning to track neurodiversity in the next 12 months. 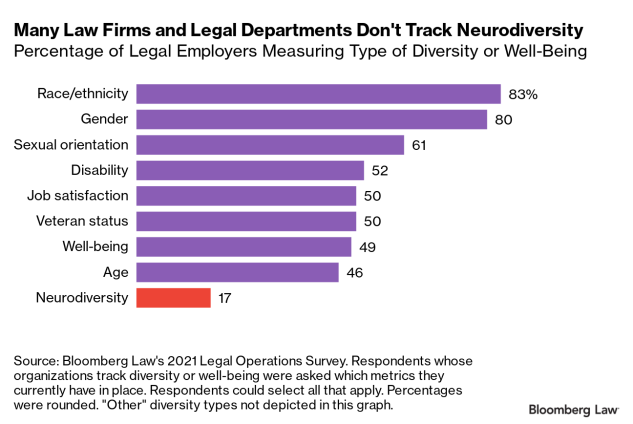 Even if every respondent who plans to measure neurodiversity actually does, the total percentage tracking it would still lag well behind other DEI-related metrics currently being tracked. Which raises the question: Why does neurodiversity come in last? The most likely answer: Because it came in latest.

Neurodiversity is still an emerging field of study and not as much is known about it—in relation to employers’ diversity, equity, and inclusion efforts—as is known about factors such as age and race. Many law firms and legal departments may simply—but mistakenly—include neurodiversity within a broader “disability” category, and don’t see the two as needing separate metrics. Others may not fully understand the range of neurodiversity, or they may not have methodologies in place to measure this metric.

It would behoove employers to implement more neurodiversity tracking. Neurodiverse employees often perform better and more efficiently at certain mathematical and computer tasks, which could be beneficial regarding legal tech usage. They can voice creative ideas at meetings and present new ways to approach problem-solving that their neurotypical counterparts may have overlooked. To achieve true diversity, tracking this important metric is essential.