A general view of the atmosphere during Airbnb Open LA - Day 1 on November 17, 2016 in Los Angeles, California.
Photo by Mike Windle/Getty Images for Airbnb

The squeeze is on for companies that had planned to go public in 2020—and for the employees who work for them. Covid-19 is giving pre-IPO companies good reason to stay private longer, meaning that there are three notable impacts: First, companies lose new financing; second, employees can’t cash out; and, in at least one instance, employees may lose their stock options altogether. 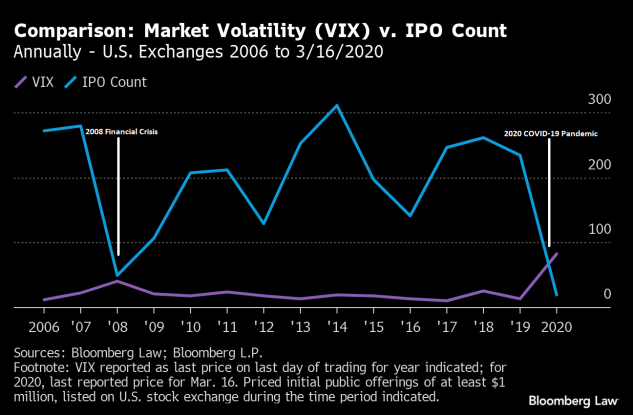 Per Reuters, companies such as Cole Haan, Warner Music Group, and J Crew spinoff Madewell have already announced they are delaying their public stock offerings; more postponements are likely. For long-running startups like Airbnb, this development could bring significant financial pain to their
employees who have long been clamoring for the company to go public before their stock options expire.

Many startups were looking to list in the first half of 2020 to avoid the volatility of the latter half of a presidential election year. Instead, volatility has arrived early—and at higher sustained levels since at least 1990. The IPO market and would-be public companies do not like volatility, and companies considering a direct listing will find even less interest.

Volatility increases risk across the financial markets. With respect to IPOs, volatility makes the entire offering process uncertain, scaring investors and startups alike. Market volatility also makes pricing an offering much more difficult. Compounding the pricing problem is the markedly increased uncertainty surrounding the valuation that investors should assign to a particular company seeking to go public as the greater economy falters. Companies in such a position have the choice of either delaying their offering until market conditions improve or moving forward but reducing the share offer price to keep investors interested. Of course, discounting the offer price hurts existing stockholders, the very people an IPO is often intended to benefit the most.

Direct listings (sometimes called direct public offerings or DPOs) are even more vulnerable to market swings than IPOs, since they lack an underwriting syndicate to make a market for the company’s stock and to stabilize the offering. The Chicago Board Options Exchange’s Volatility Index, or VIX, recently hit an intra-day high of 84.83 (05:39) on March 17 and reached a closing high of 82.69 on March 16, higher than any close experienced during the tumultuous financial crisis of 2008 (although somewhat below the intraday high of 89.53 reached on Oct. 24, 2008). As recently as Feb. 18, the VIX closed at 14.83. IPOs and direct listings will probably cool considerably until volatility and risk appetites return to normal levels.

Employees to Feel the Sting if Airbnb Stays Private

Airbnb, the biggest name expected to publicly list in 2020, finds itself in a perhaps uniquely unenviable position. Amid the battering of its travel sector business and the market switching to “risk-off” as investors grapple with the uncertain implications of a deadly pandemic, the startup is under considerable pressure from employees to go public—and soon.

According to a September 2019 article in The New York Times, Airbnb has “two tranches of employee equity that are set to start expiring in November 2020 and in mid-2021.” The company made an announcement Sept. 19, 2019, that it expects to become a public reporting company in 2020. If Airbnb pursues the expected direct listing over an IPO, it would enable those employees to avoid the usual six-month lockup on selling their shares into the market. Bloomberg reports Airbnb was planning to start the process to go public this month or in April, but the company could now delay until 2021 or later.

IRS tax rules prevent an employer from extending the term for its employee incentive stock options (ISOs) after the employer has set the initial term. That means this is nervous time for Airbnb employees holding those expiring ISOs. Unless the company’s stock is publicly trading before each of those deadlines, those stock options will expire and the employees holding them will have nothing to show for them.

Timing going public is often tricky for companies, and all signs point to continued economic tumult ahead. It appears increasingly likely Airbnb will miss going public by Nov. 2020, effectively making the first tranche of those employee stock options worthless.