Uber Inc. signage is displayed in front of the New York Stock Exchange during the company's initial public offering May 10, 2019.
Photographer: Michael Nagle/Bloomberg

Initial public offerings achieved healthy results overall and near-mythical venture capital-backed exit values in the second quarter of 2019. These U.S. fundraising efforts more than compensated for a slow start to the year, largely resulting from the disruption and uncertainty of a partial federal government shutdown.

Against the backdrop of an enduring and increasingly acrimonious U.S. trade war with China and notable softening of economic conditions in the U.S., Europe, and China, initial public offerings on U.S. exchanges surged in the second quarter, charting their best quarterly performance in years. The improved market performance owes much of its success to a veritable herd of unicorns (start-up companies valued at $1 billion). 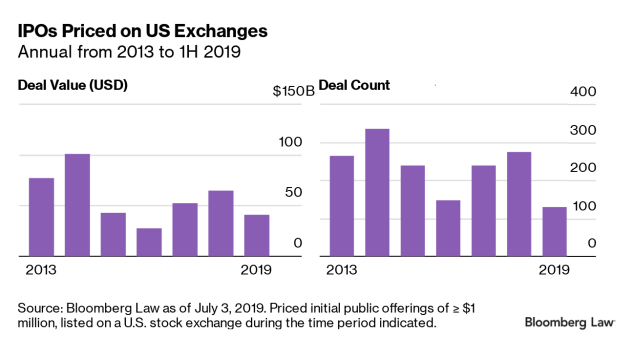 Although deal count dipped slightly to 128 from 2018’s strong first half total of 136 IPOs, the total value of IPOs priced in the first half of 2019 actually increased from $37.72 billion to $40.78 billion. The direct public offering of Slack adds an additional $4.56 billion to those totals. (Bloomberg Beta, the venture capital arm of Bloomberg LP, is an investor in Slack.)

The deal count comparison belies the vigor in the current IPO market. The first quarter tally of initial offerings, suppressed by the government shutdown, nearly doubled in the second quarter. Considering the market’s trajectory, the robust IPO pipeline for the rest of the year, and the increasing size of offerings, 2019 is on track to exceed 2018’s $64.90 billion total deal value.

Increase in Pending IPOs Likely a Product of Government Shutdown 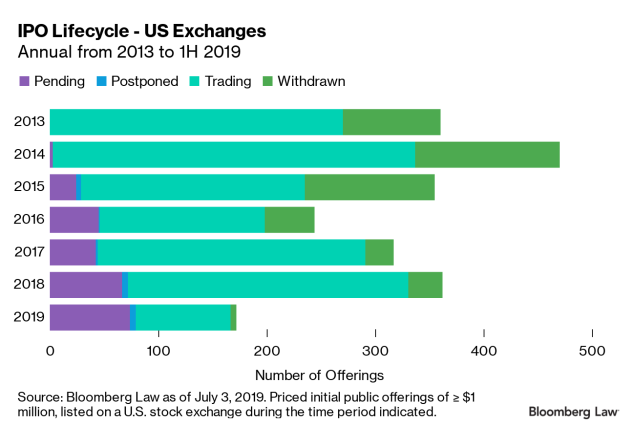 A jump in pending IPOs likely resulted from the partial federal government shutdown from late December 2018 until late January 2019, which created a backlog of IPOs for the SEC to review. That backlog increased when many companies decided to move forward with offerings they had held in abeyance. The percentage of pending IPOs increased significantly during the first half of 2019, to 43% of all IPOs from 19% in 2018 and 13% in 2017. The proportion of pending IPOs should decrease in the second half of this year, although the strong IPO pipeline may keep the percentage of pending IPOs above recent historical levels.

The trend over the last three years—towards a larger percentage of launched IPOs culminating in trading and a smaller percentage of IPOs failing—looks likely to continue, despite the fact that the shutdown artificially depressed the percentage of trading IPOs.

The market for IPOs remains strong, particularly for start-up issuers with robust growth prospects—in other words, those that can offer considerable value to investors. 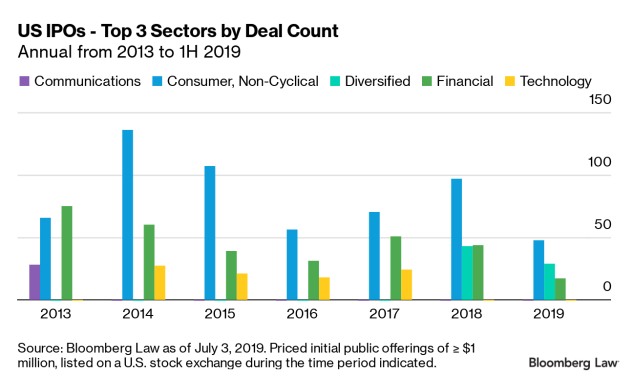 In the first two quarters of 2019, the consumer (non-cyclical) sector was the most active with 48 IPOs, continuing its dominance over other industry sectors by number of IPOs since 2014.

IPOs generated $40.77 billion in the first six months of 2019, on pace to exceed 2018’s full year total by over $16 billion. Performance by the top sectors was even more impressive. Led by Uber’s XL-sized IPO, the communications sector raised more in just the first six months of 2019 than the top sector in 2018 (consumer, non-cyclical) raised in all of 2018 ($14.4 billion). The other top fundraising sectors for 2019 thus far (consumer (non-cyclical) and diversified) are well on their way to substantially exceeding their 2018 dollar totals. 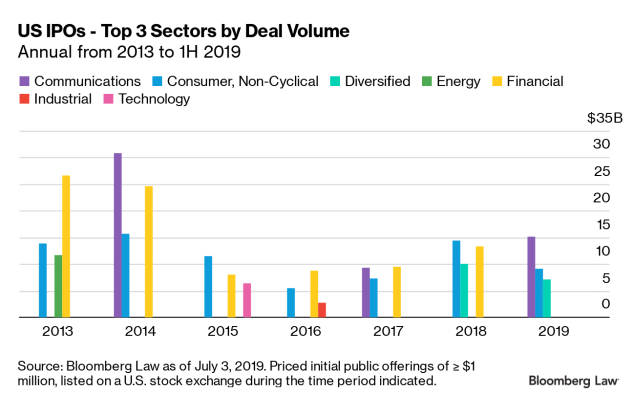 The top IPOs by dollar value in each industry sector in the first half of 2019 were: 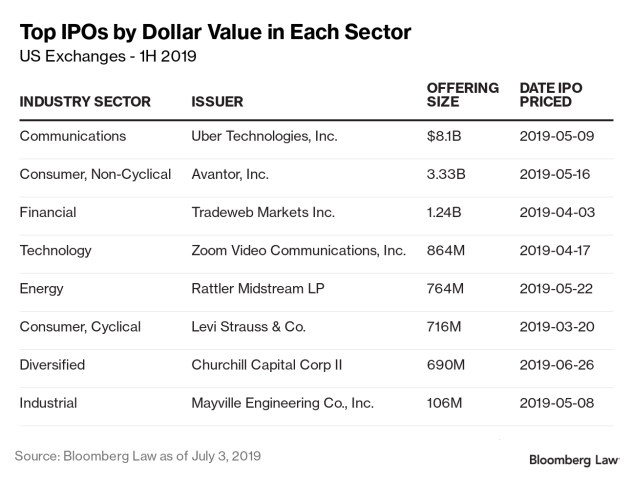 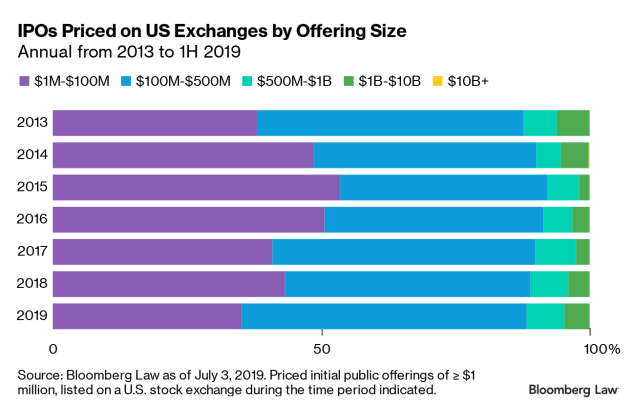 As the offer size of IPOs maintains its upward trajectory, the proportion of offerings falling within the smaller $1 - $100 million range continues to shrink. Smaller offerings contracted to only 35% of total IPOs, down from over half (51%) of total IPOs as recently as 2016. 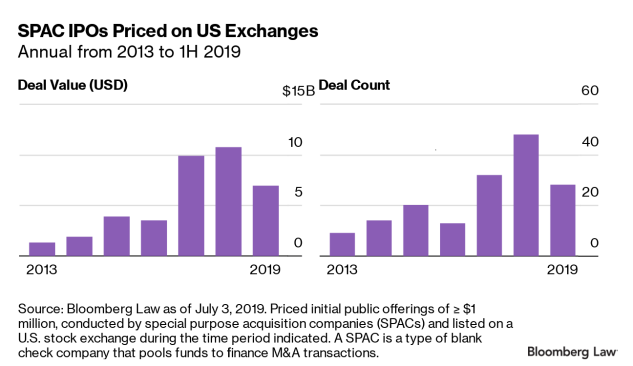 Special Purpose Acquisition Companies have increased in popularity in recent years. SPACs are a type of blank-check company whose purpose is to find a suitable merger or acquisition of an operating company according to the selection criteria disclosed in the offering’s prospectus. A SPAC typically must complete an acquisition within 24 months of the offering’s closing or return the funds to investors with interest.

As the chart above illustrates, the number of SPAC IPOs dramatically increased in recent years. In the last two completed years, SPACs growth has been phenomenal: 146% in 2017 and 50% in 2018. SPACs are continuing their ascent in 2019 but at a more pedestrian pace (on pace to grow more than 16% versus 2018).

A SPAC offering expected later this year ought to garner significant media attention. Richard Branson has announced his plans to take his Virgin Galactic business public via already public blank-check company Social Capital Hedosophia. If successfully completed, the merger would make Virgin Galactic the world’s first publicly listed space-tourism venture. Time will tell if the public valuation of the company will prove as astronomical as the business plan.

The IPO pipeline for the second half of 2019 looks robust and new offerings generally continue to perform well. The IPO outlook for the rest of the year is bright and results could set records.

Long-term, there are some concerning trends for IPOs. Companies are relying on private investment for financing growth years longer than in the past. They are going public later in their development, perhaps near their peak valuation, and early investors are exiting at that time having secured an out-sized portion of the company’s upside. Higher valuations, reduced growth potential, and continuing unprofitability are combining to dissuade investors from a growing number of VC-backed offerings. IPO alternatives, such as direct listings and newly SEC-cleared Reg A+ offerings by blockchain company Blockstack and video platform YouNow, in addition to private capital, will likely continue to reduce the IPO’s pull for companies looking to raise capital.