It seems a silly question, comparing the bygone “annus horribilis” of shutdowns and furloughs to the just-finished year of surges in unions’ organizing strength and popularity.

But judging by the preeminent statistic in the Bureau of Labor Statistics’ newly released annual report, it’s no contest: 2020 trounces 2022.

That doesn’t seem right, does it? One would think that BLS’s 2022 data would reflect at least some of that year’s labor resurgence.

Actually, it did. It just takes a little longer to find it.

The membership rate, which represents the percentage of all non-self-employed US workers who are members of unions, is a very valuable year-over-year metric. But it can go a little wonky during times of volatility in employment—like 2020.

In that year, the number of union members fell by more than 300,000. But a still-astonishing total of 9.6 million jobs were lost overall—the vast majority of which were not protected under collective bargaining agreements. As a result, the percentage of remaining workers who belonged to a union actually rose to 10.8%.

Looking at the corresponding raw totals for 2022, it’s easy to see that unions fared much better than they did in 2020—or in any recent year, actually.

Union membership in 2022 increased by 273,000 to 14.3 million workers, BLS reported. That’s the first time that union ranks have risen since 2017, halting a four-year decline. 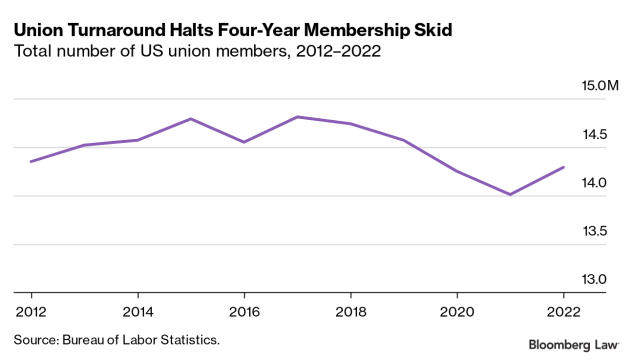 The 2022 increase is also the largest year-to-year boost in union headcount since 2008, and the third-largest since 1983–1984, when BLS started using its current metrics. 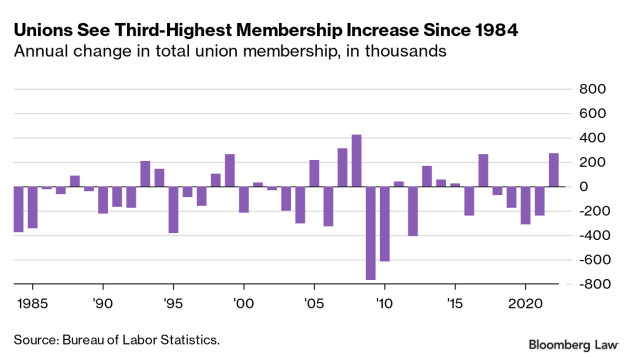 The only reason why 2022’s membership rate fell to 10.1%, even as the membership total climbed, is that union employment was utterly outpaced by overall employment. According to the BLS report, the total number of wage-and-salary workers grew by 5.3 million.

“This disproportionately large increase” in overall employment, BLS’s report said, “led to a decrease in the union membership rate.”

An all-time low in the membership rate cannot be ignored, of course. Union leaders will need to focus on organizing larger bargaining units if they are to truly flip this decades-long downward trend and grab a bigger share of the overall labor market.

But the data in the BLS report show a definitive increase in union membership in 2022, regardless of what the US workforce did on a much larger scale. And that all-too-uncommon occurrence shouldn’t be ignored either.

Bloomberg Law’s labor data trackers are available to subscribers on our Labor Plus: Organizing and Bargaining Data resource.