Not a single lockout of union workers has been initiated by employers so far in 2020, according to Bloomberg Law’s continually updated database of work stoppages. But that doesn’t mean lockouts have suddenly become an obsolete labor relations strategy for management-side negotiators. 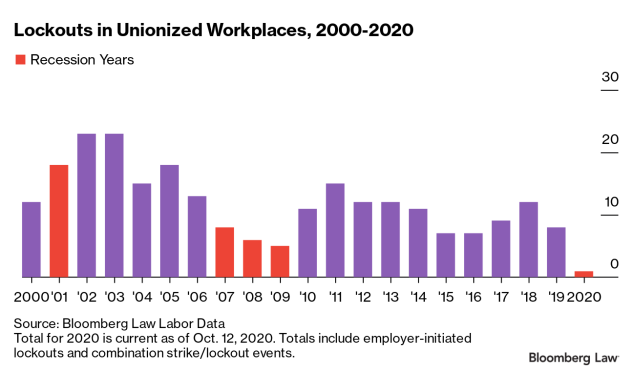 The lone lockout in the first three quarters involved 8,000 striking nurses at six hospitals in Washington state. But that stoppage in January was not started by management: In a fairly commonplace tit-for-tat practice in the health care industry, the hospital owner temporarily locked out nurses who staged a three-day walkout so that their replacements could complete their five-day contracts.

It makes sense that lockouts would be temporarily nonexistent during a pandemic. After all, there’s no point in barring union workers from entering the premises when the premises are already closed.

But there’s good reason to expect a rebound in lockouts in the near future, and it comes from why lockouts happen in the first place. Employers initiate lockouts to break up bargaining impasses — situations where labor and management are unable to agree to terms while negotiating a new union contract. Such impasses are usually about economic issues: wages and benefits.

In recessions, these issues are even more hotly debated than usual, thus motivating more employers to turn to lockouts as a leverage-builder.

Why, then, aren’t we seeing these recession-response lockouts already?

It’s too soon. Impasses can occur only when a union contract expires. Contracts in place now might not be up for renegotiation for years still. So there’s a lag time. Take a look at the chart above, and notice the bumps in lockouts in the years following the two most recent recessions. That’s what we can expect when this current downturn ends — assuming it will be safe to go back to work at all.