Want proof that unions are prevailing at the bargaining table, not just the ballot box? Look no further than the lump-sum cash bonuses loaded into labor contracts in the first quarter.

When unionized employers give their workers signing bonuses or other one-time payments, it’s often in lieu of costlier, compoundable annual percentage increases. But that’s not what’s happening here. Sixty of the 182 union contracts in Q1 analyzed by Bloomberg Law provided for some type of lump-sum payment, in amounts ranging from $500 to $15,000 per worker. And all but two of those contracts called for a first-year pay raise as well. This shows that employers are giving out bonuses on top of raises, not instead of them. 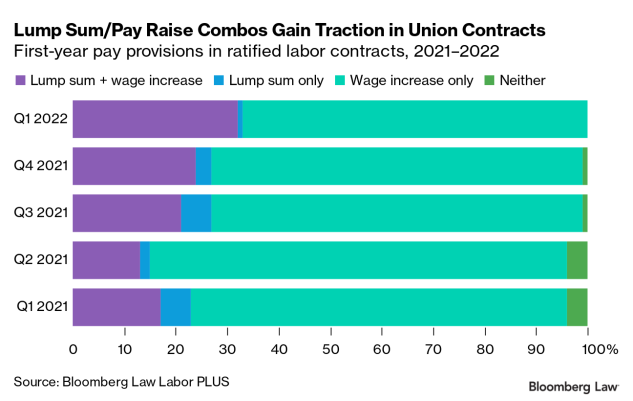 Even without lump sums in the picture—that is, looking only at annual raises—union wages are soaring. Union contracts ratified in Q1 gave workers an average first-year wage increase of 4.8%, the highest quarterly increase since at least 2007, according to Bloomberg Law’s latest Quarterly Union Wage Data report.

But when lump sums are added to the calculations, it’s easy to see that unions are negotiating at a whole other level. Q1’s total average increase, with lump sums factored in, reached an unprecedented 6.0%. That’s twice as high as the 3.0% reported less than two years ago. 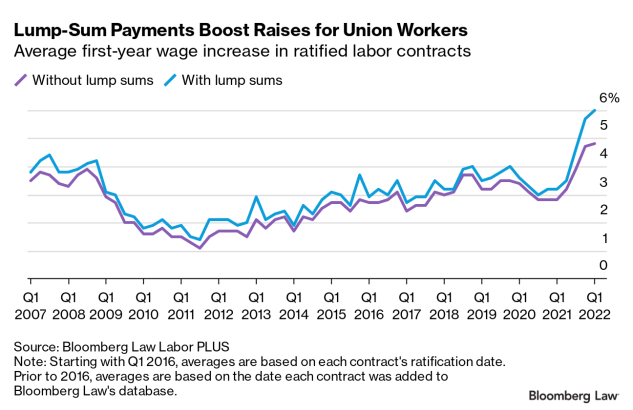 The difference a lump-sum payment can make to a union worker’s earnings has never been greater. The 1.2 percentage-point gap between the averages with lump sums included (6.0%) and excluded (4.8%) is the widest since at least 2007. It’s three times wider in Q1 of this year than in Q1 2021.

With unemployment back to pre-pandemic lows and demand for skilled workers at all-time highs, these statistics show that labor relations managers are taking the necessary steps to make sure their unionized workers feel valued after two years of Covid-borne belt-tightening. (Several Q1 contracts even framed their cash bonuses as “pandemic appreciation payments.”)

In other words, these lump-sum payments are not cost-containment strategies. They’re concessions.

Bloomberg Law subscribers can access, search, and run reports from the Settlement Summaries database by using our Labor PLUS: Organizing and Bargaining Data resource.